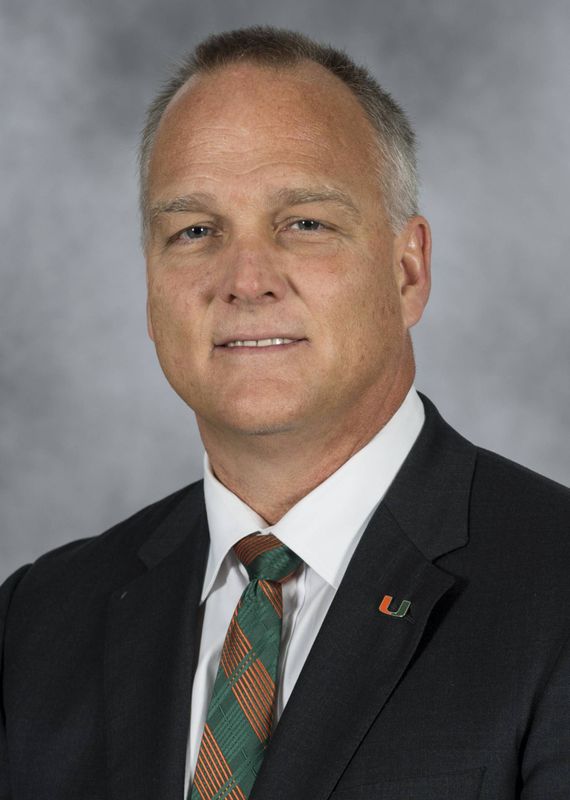 In just two seasons as head coach, Mark Richt has made an indelible impact on his alma mater’s football program — both on and off the field.

Richt has posted a 19-7 record over those two seasons, the third best start in Miami history, and a stretch that included a 15-game winning streak — UM’s longest since 2002. The Hurricanes won 10 games in 2017, climbing as high as second in the College Football Playoff rankings. Miami captured the Atlantic Coast Conference’s Coastal Division for the first time in its history and earned an invitation to the Capital One Orange Bowl for the first time in 13 years. Richt won 2017 ACC Coach of the Year honors and was also named the 2017 Walter Camp Coach of the Year.

Off the field, Richt has energized the program, from supporting the fundraising efforts for the Carol Soffer Football Indoor Practice Facility to launching The U Network, which assists former Hurricanes in networking and career placement after their playing careers have concluded. Miami was one of three schools, along with Stanford and Northwestern, to earn the 2016 American Football Coaches Association (AFCA) Academic Achievement Award. In addition, the Hurricanes ranked first among all FBS programs in 2016 in the NCAA Team Works Helper Helper Community Service Competition, and helped Miami finish first among Division I schools overall in 2018.

Richt was named the University of Miami’s 24th head football coach on Dec. 4, 2015. His hiring provided immediate dividends as the Hurricanes posted a 9-4 record in his first season in Coral Gables. Miami then defeated West Virginia, 31-14, in the Russell Athletic Bowl for the program’s first bowl victory in 10 years. The Hurricanes were ranked No. 20 in the final Associated Press poll and No. 23 in the final Amway Coaches Poll – the program’s first season-ending rankings since 2009.
Miami had 10 players earned ACSMA All-ACC honors in 2016, while quarterback Brad Kaaya became Miami’s all-time passing yards leader. Freshman wide receiver Ahmmon Richards broke the 31-year-old freshman receiving record at Miami originally set by Michael Irvin, while sophomore running back Mark Walton became the 11th 1,000-yard rusher in program history.

Richt, born in Omaha, Neb., and raised in Boca Raton, Fla., returned to his alma mater after leading the University of Georgia football program for the previous 15 years. He compiled a 145-51 overall record and an 85-40 mark in Southeastern Conference play. Georgia won two SEC championships, six SEC East titles and nine bowl games under Richt, and finished the season in the Associated Press Top-10 rankings seven times.

Richt’s 164 career wins rank fourth among active FBS head coaches and his .744 winning percentage ranks as the seventh best among current FBS coaches with at least five years of experience. Richt is one of only seven head coaches in SEC history to record four straight 10-win seasons (2002-05).

Richt coached some of the greatest quarterbacks in Georgia history, including David Greene, a four-year starter who left Athens as the then-winningest quarterback in NCAA history with 42 career wins. Aaron Murray, also a four-year starter, is the SEC’s all-time leader in passing yards (13,166) and touchdown passes (121). Matthew Stafford threw for 3,459 yards and 25 touchdowns (then a school record) as a junior for the Bulldogs.

Overall, four of Georgia’s quarterbacks under Richt were drafted – Greene (Seattle), Murray (Kansas City), D.J. Shockley (Atlanta), and Stafford, who was the top overall pick in the draft in 2009 by the Detroit Lions.

In 2016, Richt was named the first-ever honorary head coach of the Allstate AFCA Good Works Team for his commitment to giving back to others. In 2013, Richt received the Stallings Award given for commitment to humanitarian and community service efforts, and in 2010, he was named to the AFCA Board of Trustees.

Before his arrival at Georgia, Richt spent 11 seasons at Florida State, the last seven as the offensive coordinator. In his time in Tallahassee, the Seminoles finished in the nation’s top five in scoring offense on five occasions, top 12 in total offense five times and top 12 in passing offense five times. FSU won two national championships (1993, 1999) and played for the national championship in 2000. The 2000 team finished the regular season ranked first nationally in total offense (549.0 ypg), first in passing offense (384.0 ypg), and third in scoring offense (42.4 ppg).

Richt launched his coaching career at Florida State, first as a graduate assistant from 1985-86 and then as a volunteer assistant from 1987-88. He spent the 1989 season as the offensive coordinator at East Carolina before returning to FSU as the quarterbacks coach.

Richt played quarterback for the Hurricanes under legendary head coach Howard Schnellenberger. He spent most of his career at Miami as a backup to Pro Football Hall of Famer and former Buffalo Bills star Jim Kelly. In one of Richt’s years at Miami, his teammates included Kelly, Testaverde and Bernie Kosar, as well as quarterbacks coach Earl Morrall.