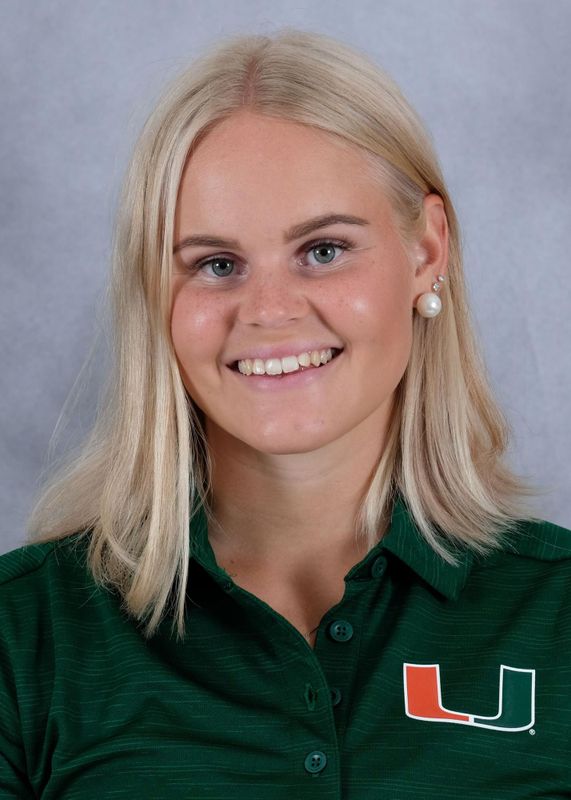 ACC Golfer of the Month (February)
2019-20 (Sophomore):
Started her sophomore year with a T41 finish at the Minnesota Invitational, with a two-round total of 150 (+6)… Posted a 54-hole total of 222 (+12) at the Schooner Fall Classic, for a T59 finish… Aided Miami to a fourth place team finish at the Betsy Rawls Longhorn Invitational, with a three-round total of 216 (E) to place T11.

2018-19 (Freshman): Opened her collegiate career at the Florida Challenge with a top-10 finish, tying for sixth at one-over 73 … In just her third round of collegiate competition (UCF Challenge), moved into a tie for second in the UM history book at seven-under 65 … Closed out the UCF Challenge with her first career individual title, at 11-under 208, tallying 13 birdies and an eagle … Locked up ACC Golfer of the Month in February … Finished the Allstate Sugar Bowl with 41 par or better holes and six birdies to card a nine-over 225 and place tied for 22nd … Secured her fourth consecutive top-25 finish, closing out the Florida Gators Invitational tied for 24th at six-over-par … Finished tied for 36th at the Bruzzy Invitational at four-over 220, and helped the Hurricanes to a top-five finish … Competing in her first ever ACC Championship, closed out the event tied for 44th at 13-over 229 … Helped Miami to a 15th-place finish at the NCAA Cle Elum Regional, tying for 79th at 19-over 235.

Prior to Miami: Currently stands No. 116 in the World Amateur Golf Rankings … Has garnered four wins and 12 top-10 finishes over the past two years … Won the French Ladies International Championship and the Skandia Junior Open … Placed third in the Duke of York Young Champions Trophy in 2016 … Tied for third at the 2017 Ladies British Amateur Championship.