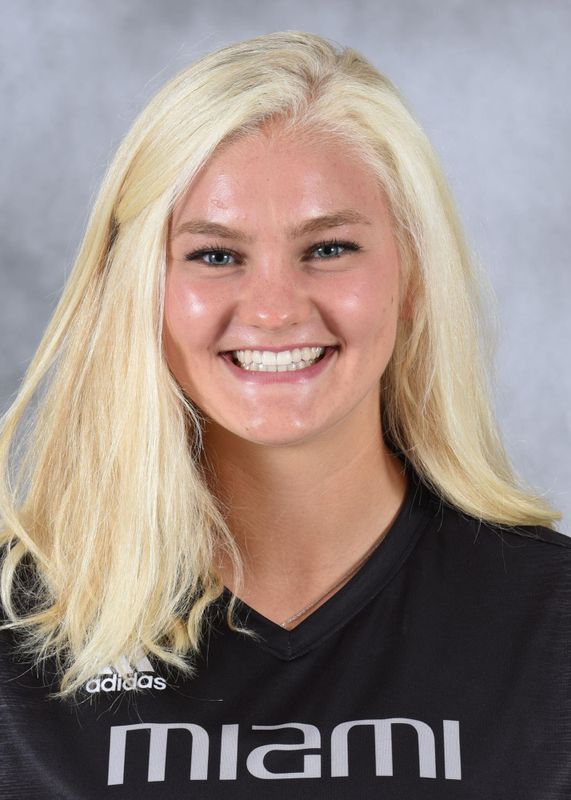 2018 (Freshman): One of two freshmen to see action in all 18 matches and earned six starts on the front line … Logged 908 minutes in her opening campaign … Played at least 40 minutes in 13 matches, including 60-plus in five contests … Finished second on the team with four goals and eight points … Registered 23 shots, 15 of which were on target, ranking third and tied for third, respectively … Notched three shots and one on target against Florida Atlantic (8/17) … Tallied a goal against FIU (8/19), finishing the match with team-highs in shots (five) and shots on goal (four) … Posted her first ACC goal in the opening half against Clemson (9/14) … Notched the match-tying goal against eighth-ranked Boston College (10/13) … Attempted the Hurricanes lone goal of the match and tallied her first collegiate match-winner in a 1-0 victory over ninth-ranked Florida State (10/25).

High School/Club:  Played for ECNL Sockers FC, Chicago from 2016-18 … Led the team with 19 goals a season ago … Started 11 developmental academy matches in the fall and played 90-plus minutes in each one, tallying seven goals … Won the North American championship in 2016 … Enrolled early at the University of Miami in the spring of 2018.

Personal: Full name is Mallory Ann Olsson … Born May 5, 2000 … Parents are David and Barbara Olsson … Nickname is “Mal”… Father is a director of corporate communications, AON and mother is a private educator … Has an older brother, Daniel, and sister, Julie, and younger sister, Abigail … Intends to major in exercise physiology … Favorite athlete is Karim Benzema of Real Madrid … Chose Miami because of the location and campus, as well as her desire to compete in the ACC.