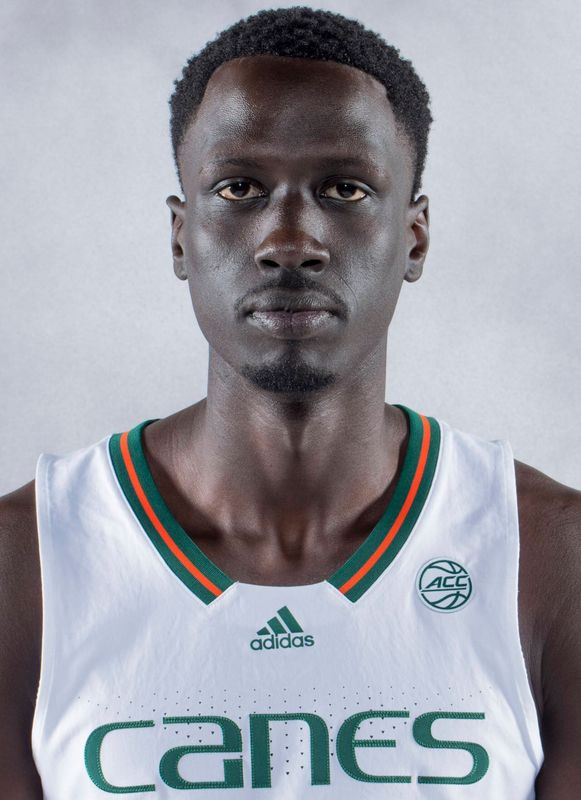 As a Fifth-Year Redshirt Junior (2021-22): Appeared in 26 games and made four starts … Totaled 23 points, 19 rebounds and four blocks, while shooting 8-of-15 (53.3 percent) from the field … Twice co-led Miami in blocks … Registered a season-best four rebounds against Fordham (12/12) in Brooklyn, N.Y. … Played 16 minutes against NC State (12/29) and made his lone field-goal attempt in his first start of the year … Tallied season bests in points (five), rebounds (four), made field goals (two) and minutes (21) in a start versus Wake Forest (1/1), adding a block and a steal … Posted two points, one rebound and one assist in the win at RV/No. 25 Wake Forest (2/12) … Started the Senior Day outing against Virginia Tech (2/26) … Played in two NCAA Tournament contests, the second-round victory over No. 8/7 Auburn (3/20) and the Elite Eight game against the eventual national champion, third-ranked Kansas (3/27).

As a Redshirt Junior (2020-21): Season did not count towards eligibility due to COVID-19 pandemic … Played in 25 of 27 contests, earning two starts … Averaged 2.2 points and 3.1 rebounds per game … Logged 14 blocked shots, third-most on the team, and 19 offensive rebounds, good for fifth-most among Hurricanes … Grabbed five-plus rebounds eight times, including in five of the final eight games … Paced the team in blocks five times and in steals once … Pulled down five rebounds to help Miami rally from a 20-point deficit and beat Purdue (12/8) … Scored a career-high eight points on 4-of-4 shooting, a career best in makes, in his first ACC road game, at No. 24/RV Virginia Tech (12/29) … Totaled five boards versus North Carolina (1/5) … Did not play at Boston College (1/12) because of his left knee … Amassed six points, a co-team-high five rebounds and a career-high three steals in 20 minutes against Notre Dame (1/24) … Blocked two shots in 25 minutes of action at No. 16 Florida State (1/27) … Earned the start at Wake Forest (1/30) and played a career-high 29 minutes, scoring seven points on 3-of-4 shooting, including connecting on his first collegiate 3-pointer … In the victory over Duke (2/1), tallied six points on 3-of-4 shooting, as well as a career-best two assists … Notched six boards in 27 minutes against Georgia Tech (2/20) … Pulled down five rebounds versus No. 11/9 Florida State (2/24) … Started the regular season finale against Boston College (3/5) and grabbed five boards … Compiled five rebounds in the first round of the ACC Tournament versus Pittsburgh (3/9) … Grabbed five rebounds against Georgia Tech (3/11) in the ACC Tournament quarterfinals.

As a Redshirt Sophomore (2019-20): Played in the first seven affairs of the season before suffering a season-ending right knee injury in practice … Averaged 1.7 points and 2.0 rebounds in 12.0 minutes per game … Returned to action in the season opener against fifth-ranked Louisville (11/5), recording two rebounds, two blocks and two steals … Scored four points in the victory at UCF (11/12) … Notched four points, a season-high four rebounds and two blocks against Quinnipiac (11/16) … Scored four points in a matchup with his brother, Gorjok, of Florida (11/22) at the Charleston Classic … Played a career-high 20 minutes against UConn (11/24) at the Charleston Classic in his final outing of the season.

As a Redshirt Freshman (2018-19): Played in eight games, including making one start … Suffered season-ending left knee injury on Dec. 1 against Yale … Played at least 11 minutes off the bench in each of his eight games … Recorded six rebounds and three blocks in 14 minutes of action in his Miami debut against Lehigh (11/9) … Scored first college points in win over Stephen F. Austin (11/13) … Made first college start against Yale (12/1), scored five points in season-high 19 minutes.

High School: Member of the 2017 Jordan Brand Classic Regional Team … Ranked No. 91 nationally by ESPN, including No. 16 among power forwards and first in New Jersey … Joined former Miami teammate Dejan Vasiljevic on the Australian U19 team, averaging 4.0 points, 4.1 rebounds and 0.7 blocks for the Emus at the 2015 FIBA World Championship … Played high school basketball at Australia’s Centre of Excellence before attending Blair Academy in New Jersey … Other Blair grads include NBA players Luol Deng, Charlie Villanueva and Royal Ivey … Played on the AAU circuit for the PSA Cardinals … Pangos All-American Camp Top 30 Cream of the Crop Game … Committed to Miami over Connecticut, Florida and Kansas.

Personal: Born May 12, 1998, in Cairo … Moved to Australia at three months old … Of Dinka descent … Older brother, Gorjok, plays for ERA Nymburk in the Czech Republic after spending one year at California Baptist and four at Florida … Younger brother, Akoldah, plays for the Illawarra Hawks of the NBL … Moved to New Jersey in the fall of 2015 to begin his career at Blair Academy … Earned a bachelor’s degree from Miami in May 2021 after majoring in sociology with a minor in sport administration … Currently pursuing a second bachelor’s degree in liberal arts.