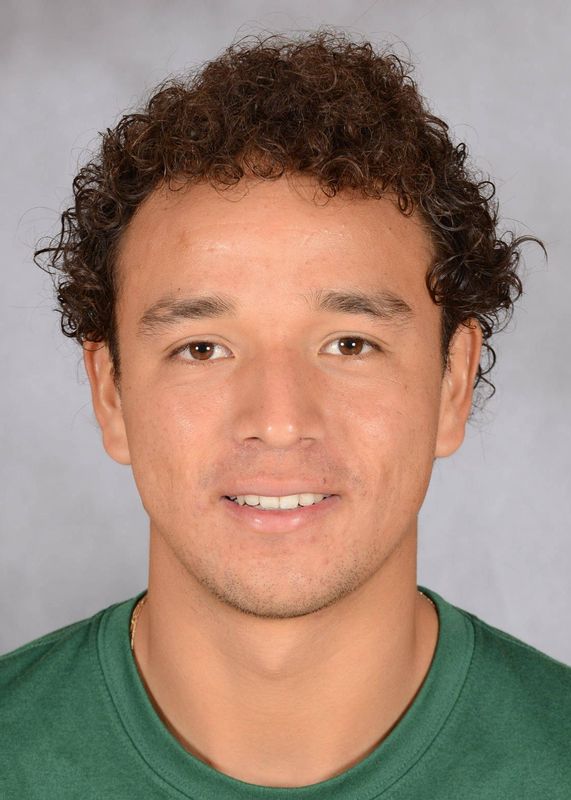 Fall: 3-3 singles, 4-3 doubles. Spring: 6-10 singles, 11-6 doubles.
Missed six matches early in season with knee injury … Finished the season with 6-10 singles record and 3-8 ACC mark … Posted 11-6 doubles record, 5-6 in ACC … Paired with Omar Aly to post 10-4 doubles mark at the No. 1 position … Also was 1-1 with Danny Shebshayevich at No. 3 and 0-1 with Henrique Tsukamoto at No. 2 … Primarily played out of position No. 4 but competed out of the No. 3 spot for four singles matches … Won four consecutive singles matches in March … Partnered with Omar Aly to win four consecutive doubles matches to end the season … Book Buster (3.0 spring semester GPA) … Athletic Director’s Honor Roll (3.2 spring semester GPA) … Dean’s List (3.5 spring semester GPA).

Fall: 3-2 singles, 2-1 doubles. Spring: 16-8 singles, 6-13 doubles.
Posted a team-best 16-9 singles record with a 5-5 ledger in ACC matches… Led team in overall singles wins… Posted a 12-1 singles record in home matches… Had a stretch in which he won 11 of 12 matches, including six straight… Defeated No. 58 Ryan Shane of top-ranked Virginia 6-4, 4-6, 6-4… Was the only player of the 2012-2013 season to defeat a ranked singles player… Recorded a 9-7 mark against opponents on ranked teams… Led team with five ACC singles wins… Finished second on the team with 10 straight sets wins… Clinched a 4-3 victory over then-No. 71 Louisiana-Lafayette with a 6-7, 6-2, 6-4 win at No. 2 singles… Played primarily at the No. 3 singles position while also seeing action at No. 2 singles… Finished with six doubles wins, all coming from the top-spot… Partnered with Marco Stancati and Omar Aly and Henrique Tsukamoto at No. 1 doubles… With Aly, the duo earned a No. 66 ITA doubles ranking in late March… The duo also notched an 8-3 victory over Florida State’s 22nd-ranked duo Benjamin Lock and Andres Bucaro… Posted a 3-2 overall singles fall match record…  Recorded a 2-1 overall doubles record while partnering with Marco Stancati… Advanced to the Round of 16 in the USTA/ITA Regional Championships by defeating top-6 seed Norbert Nemscek (UNF) 6-2, 6-1.

Summer 2012
Traveled to Mexico to compete in the ITF Futures F8 Tournament and also helped his team win the Davis Cup Group III with Team Guatemala in Tobago, Trinidad & Tobago … Won three qualifying matches, but lost in three sets in the first round of the event … In doubles, Gonzalez and his Mexican teammate defeated a pair from Guatemala in the first round, but lost to a Serbian/Austrian duo in the quarterfinals … In Tobago, was one of five players on the Guatemalan team, defeating Aruba in doubles to help his country take home the championship.

Prep
Went to school at Bilinque El Prado, in Guatemala… Ranked No. 86 among junior players in ITF rankings… Previously ranked as high as No. 61 in the world… National, Central American, Mexican and Caribbean champion in the under- 14 and under-18 age groups… Won both the Monterrey Country ITF Junior Cup in Monterrey, Mexico… Won the Tampico Junior Cup in Tampico, Mexico.

Personal
Born on Jan. 6, 1993 … Son of Wilfredo and Sara Gonazalez… Has one brother, Stefan, and one sister, Sara… Born in Guatemala… An avid movie watcher… Sports hero is Victor Valdes… Nickname is Pollo… Also recruited by University of Texas, Michigan, Georgia and Louisville … Double major in economics and sports administration, graduating in December of 2015.