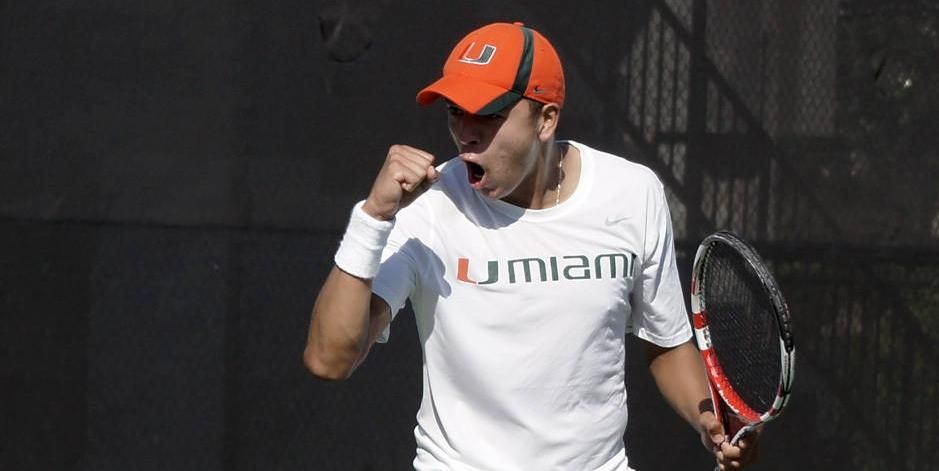 I chose to attend The University of Miami because it’s close to Guatemala. It only takes about two hours by plane to get home, I like the weather, and I really like the people. I feel at home, because there are a lot of Latin people in Miami. It’s a great University.

My role model is a goalkeeper for my favorite team Barcelona, Victor Valez. I follow him and like him so much because in the beginning he wasn’t a very good player. Throughout the years, though, he made himself one of the greatest players in the world. It’s a great example of how hard work can pay off.

Because of tennis I’m here at the University. I wouldn’t be here without tennis. It also gave me a chance to be a better person, to be grateful with what I get, to be nice to the people around me and to make more friends. I have so many nice people in my life that care about me. I’m lucky for that.

After a match I like to shower, eat and go to my room to watch TV. I don’t get to do this a lot because I’m usually so busy after matches, but this is ideal.

I prefer movies more so than television shows. I have Direct TV in my room so there’s a lot of channels to watch. I like to watch comedy or slow action films. Lately I’ve just wanted to hear the Guatemalan accent, hear people from my home talking. Recently I’ve looked up Guatemalan movies, and it’s been nice.

In Miami I am not homesick. I talk to my parents and brother almost every day. But the lifestyle here is different. It’s much faster. It’s been hard to adjust to a schedule of classes, practices and now that we’re in season there are matches. I barely have time to do anything!

Coach Rincon is one of the reasons I came here. He’s very nice. He understands me. He knows a lot and was a very good player. He knows what we have to do, how we have to react. I don’t see he and Coach Dickson as just tennis coaches. I also see them as life coaches, they support us no matter what.

My dad was my coach. I learned my basics and base from him. He helped me a lot growing up. He was a player before, and he started like I did, playing very young in the sport and in tournaments. He’s shown me what I should and shouldn’t do while traveling and practicing.

When I want to laugh I talk to my friends, back home and here in Miami.

My dream job is to be a professional tennis player. I have always dreamed of playing in tournaments, big tournaments, and being able to earn money through my hard work. It would be nice to see all of my efforts pay off.

As far as a hidden talent, I don’t have one, but I can juggle a bit!

If I had a time machine, I would go to the past for sure. I’d like to go back to when I was little, maybe 10 or 15 years ago. Now I realize how fast everything changes, and I would like to see things more slowly, analyze them and appreciate everything more.

When I’m not playing tennis I’m hanging out with my friends or watching TV.

When I look back on my childhood I will always think of some things I didn’t do, some things that, if I had done them, I would be much better today.

The U is pride. It’s my identity. It’s what I am living for.

As far as superstitions, I have a lot of them. We go to Panera to eat before the matches. The first time we went I got carrot cake, and I won that day, so I have to get carrot cake every time we go to Panera. Gabriel from the team has to take the first bite. There’s a carrot on the top of the cake, and Gabriel has to eat that too. When I’m playing I have other ones. If I win a point with a certain ball I have to use it again. If I won the last point after cleaning with my towel, I have to clean with my towel for the next point.