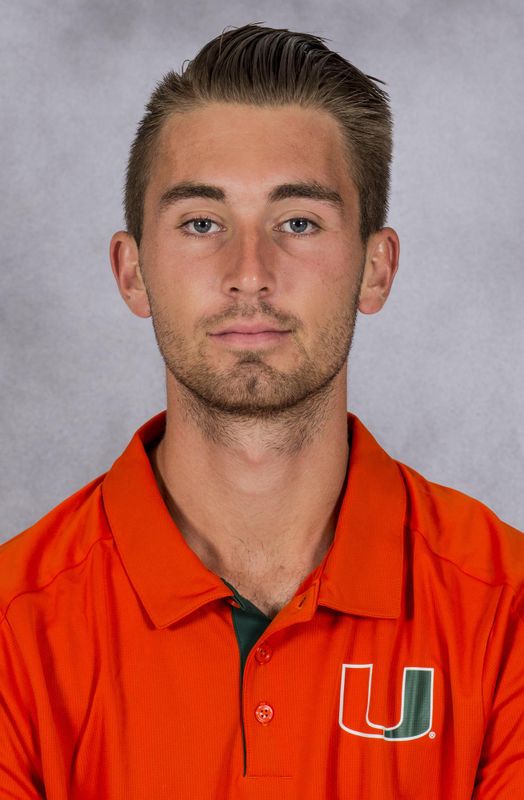 Fall: 6-3 singles, 3-2 doubles … Reached the quarterfinals of Southern Intercollegiate Championship … Began the tournament with a victory over Ricardo Jorge (Ole Miss) … In the round of 32, defeated Jan Zielinski (Georgia) in a straight set … Advanced to the quarterfinals after defeating Oklahoma’s Florin Bragusi. Reached the quarterfinals of the ITA Southeast Regional Championships, beginning with a victory over Georgia State’s Eddie Landin … Won another straight-set victory over South Florida’s Alberto Barroso-Camp in the round of 32 before defeating North Florida’s Jeffa Kecic … In doubles, while teamed up with Max Andrews, reached the quarterfinals of the ITA Southeast Regional Championships … In the round of 32, the duo defeated Georgia State’s Jannis Koeke and Giles Hussey before advancing to the quarterfinals with a victory over Georgia’s Jan Zielinski and Walker Duncan.
Spring: 12-9 singles, 11-3 doubles … 5-6 singles, 3-3 doubles in ACC play … Opened the spring season ranked No. 86 and ended the season ranked No. 63 … All-ACC Second Team In singles, earned a quintet of victories against fellow ranked opponents and competed at the No. 1 position in every match … In non-conference play, defeated No. 51 Jack Findel-Hawkins of North Florida (Jan. 23) Minnesota’s No. 68 Matic Spec (March 17) … In ACC play, took down North Carolina’s No. 19 Ronnie Schneider (March 31), Notre Dame’s No. 54 Josh Hagar (Apr. 9) and Duke’s No. 89 Spencer Furman (Apr. 15) … Opened ACC play with a straight-set victory over Clemson’s Alex Favot (Feb. 19) … Earned a victory over Boston College’s Aldan McNulty (Apr. 26) in the opening round victory of the ACC Championship … In seven consecutive doubles matches with Nile Clark the duo remained perfect from Jan. 22 to March 17 …  In the opening nine completed matches, the pair only dropped one match from Jan. 22 to March 31 … The tandem defeated Boston College’s Derek Austin and Conor Mullins at the ACC Championship … Defeated Duke’s Jason Lapidus and Ryan Dickerson in the second round of the ACC Championship (Apr. 27) … Finished 11-3 with Nile Clark (all at the No. 2 position).

Spring: 14-9 singles, 8-9 doubles … First Hurricane to be selected for the NCAA Singles Championships since 2009 … Opened the spring season ranked No. 23 in ITA singles and entered the NCAA Championships at No. 43 … Ranked in the top 40 for 17 of his singles matches this season … All-ACC Second Team … Led the team with 14 singles victories, all at the top position … Was 6-6 in ACC singles … Defeated five nationally-ranked players, including No. 16 Benjamin Lock (Florida State) in three sets … Won 11 of his first 14 matches … Eleven of his 14 victories were in straight sets … Five of his six ACC wins were in just two sets … In NCAA Championships, won first set, 6-4, over No. 16 Jared Hiltzik (Illinois), then after being down 0-2, made a fierce comeback, but fell short in the second set 7-6 (2). Lost the third set 6-0 to end season … In doubles, was 1-1 at the top spot and 7-8 at the second position … Broke into the ITA doubles rankings with Nile Clark at No. 66 prior to the ACC Championships … Ranked No. 77 in final ITA polls … Duo defeated a pair of nationally-ranked opponents, in the No. 10 duo from Virginia and the No. 30 pair from North Carolina … Tied for team-high of eight doubles victories … Posted 3-7 mark in league play … Was 1-1 when partnered with Max Andrews, 7-6 with Nile Clark (all at second position) and 0-2 with Jesse Flores.
Fall: 6-5 singles, 4-2 doubles … In singles, was 2-2 at the UVa Ranked 1+1, defeating Skander Mansouri (Wake Forest) 4-6, 6-3, 6-2 in the Round of 16. Downed Matt Barry (Penn State) 6-2, 6-4 in Quarterfinals. Fell to No. 115 Alexander Ritschard (Virginia) 6-4, 6-7, 7-5 in Semifinals and No. 125 Mac Styslinger (Virginia) in a consolation match … Played in the ITA Men’s All-American main draw, falling to 9-16 seed Tom Fawcett (Stanford), 6-4, 6-4 in the Round of 64. Won Round of 32 and Round of 16 consolation matches before falling in the Round of 8 … Earned seventh seed at 2015 USTA/ITA Southeast Regional Championship. Won first two matches, defeating Ristomatti Lanne (Georgia Southern) and Jose Gracia (Florida State), respectively, then lost to No. 86 Elliott Orkin (Florida) 6-2, 6-2 … In doubles, at UVa Ranked 1+1, lost quarterfinal match, but won a pair of consolation matches with partner Max Andrews … Also paired with Andrews at USTA/ITA Southeast Regional Championship, defeating Daniel Yun/Andrew Li (Georgia Tech) and Joshua Wardell/Chase Perez-Blanco (Florida) before falling in the Round of 16 to Sasha Gozun/Dominic Cotrone (USF).

Fall: 8-5 singles, 1-4 doubles … Ranked No. 6 on ITA Men’s Preseason Newcomer/Freshman Rankings … Opened 2014 Saint Francis Health System ITA Men’s All-American Championships on qualifying singles list, and played way into main draw. Won three straight singles matches to qualify for first round of main draw, where he faced No. 1 seed Julian Lenz (Baylor), falling in three sets … Played in the main draw semifinals of the ITF Futures, posting a 3-1 mark in the event … Won two matches in the ITA Regional Championships as a No. 9-16 seed, then upset No. 50 Ben Wagland (Georgia) in the Round of 16, before falling in three sets to No. 100 Maxx Lipman in the quarterfinals.
Spring: 9-10 singles, 8-11 doubles … Tied for team-high nine singles wins, posting a 9-10 mark, all at the No. 1 spot … Earned a pair of wins over nationally-ranked opponents, downing No. 57 Christopher Eubanks from Georgia Tech and No. 91 Hunter Harrington from Clemson … Opened his collegiate campaign with a pair of wins, then tallied six-straight victories from Feb. 13 to March 10 … All nine wins were straight-set victories, including ranked win over Clemson, which was 7-6 (7-5), 7-6 (7-5) … Tied for third-most wins in doubles with eight … Was 7-11 at the top spot, with all seven wins paired with Henrique Tsukamoto … Was 1-0 at No. 2, also with Tsukamoto … Lost a pair of matches with Nile Clark at No. 1 … Started hot with 7-2 record while paired with Tsukamoto through March 6.

Juniors
Ranked No. 882 in the ATP singles ranking and No. 1099 in doubles prior to 2015 fall season … Career high ATP: 729 singles, 927 doubles … Won Junior Polish Championship U-21 in both doubles and singles in Poznan, Poland, in July 2015 … Between March and September 2014 jumped from No. 1,204 to No. 794 … Semifinals of Poland F5 and Estonia F2 Tournaments, and quarterfinals of Poland F4 and Poland F3, all outdoor clay court events in 2014 … Ranked a career high combined No. 111 in the ITF junior rankings … In 2013 won Ozerov Cup in Russia … Quarterfinalist at 2013 Great Britain Futures Tournament … Ranked best junior player in Poland … Attended Sopocha Academia.

Personal
Born on Nov. 28, 1995 … From Warsaw, Poland … Son of Tomasz and Hanna Lomacki … Has one sister, Weronika, who played tennis at Lake Superior State … Majoring in business.