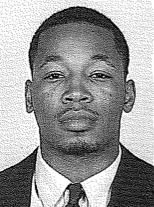 At Miami: Second year sophomore who adds depth to the Hurricane backcourt…an explosive scorer…has the ability to penetrate to the hoop or pull up off the dribble…a versatile athlete and great competitor on the court…gained valuable experience last season playing both guard positions…his 41 inch vertical leap allows him to play bigger than his size…chose UM over a group that included New Mexico, DePaul, Missouri, Arkansas State, Kent State and New Mexico State…is Miami’s first scholarship player from the state of Texas since Hammie Ward of Houston (1989-93).

As a Freshman (1997-98): Played in 27 of 28 games…led team in three-point field goal percentage hitting 7-of-15 (.467) on the season…scored in double figures twice. In the Regular Season: Played a career-high 21 minutes against Providence (2-4-98) and registered his second consecutive double figure scoring game with 12 points…hit 5-of-9 from the floor including his only three-point attempt…also recorded a career-best four rebounds…played 16 minutes against Villanova (1-31-98) and recorded career-highs in points (14), field goals (5), field goals attempted (11), three-point field goals (2), three-point field goals attempted (4), free throws (2) and blocks (1)…made his collegiate debut at Southern Illinois (11/14/97) and recorded eight points and three rebounds in 14 minutes of action. In the Big East Tournament: Did not score but recorded one assist in four minutes of action in Miami’s loss to Georgetown. In NCAA Tournament: Played four minutes in Miami’s first round loss to UCLA going 0-for-2 from the floor while puling down on rebound.

High School: Ft. Worth Dunbar High School…earned first-team Class 5A All-State and All-Region honors his senior season after averaging 23.9 points (third in the area), 6.7 rebounds, 5.5 assists and 5.0 steals…an Adidas Blue Ribbon honorable mention All-American as a senior…selected as the Fort Worth Star Telegram Tarrant County Player of the Year…was a Dallas Morning News first-team All-Metroplex selection…led Fort Worth Dunbar to a 33-4 record and the regional finals his senior year…started each of his three seasons on the varsity squad and was a two-time all-conference and all-city performer…coached by Robert Hughes.

Personal: Majoring in Liberal Arts…full name is Michael Byars Dawson…born 11/9/78…has a younger sister Kerri (16) and younger brother Dominique (13)…enjoys sleeping and talking to his mother in his free time…lists fishing as his hobby…son of Derwin and Diana Dawson.