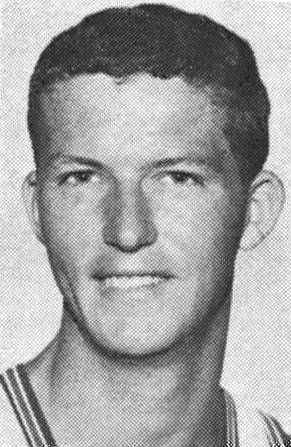 Junior forward, 6-7 ft., 175 lb., 21 years of age, physical education…originally from San Lorenzo, Calif.  Stevenson had an excellent sophomore season in which he averaged 9.1 points, and 7.9 rebounds a game. Stevenson scored on both long and short shots a year ago, averaged an even 50 percent from the field and 75 percent from the free throw line. He is an excellent good ball handler and passes well. Coach Godfrey deemed Jerry one of the best on the squad potentially last year, and believes he is on his way to being a star player. He led his high school team to an undefeated season. As a freshman in 1967, he averaged 24 points per game. He attended Arroyo high school and his coach was Boyd McCasslin.