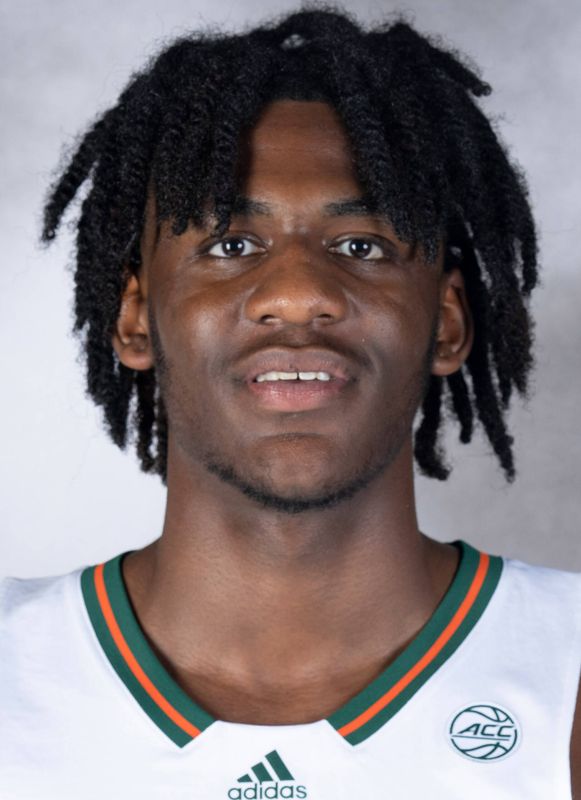 High School: Graduated from St. John’s College High School (D.C.) … Labeled a four-star, top-125 recruit by both ESPN and Rivals … Listed as the top recruit in Washington, D.C., by 247Sports, ESPN and Rivals … Ranked No. 92 nationally, including No. 26 among small forwards, by ESPN … Slotted at No. 120 on the 247Sports list, including No. 29 at his position … McDonald’s All-American Game nominee … Averaged 17.0 points, 6.0 rebounds and 4.0 assists per game as a senior and served as a team captain … Named first team all-state, second team all-conference in the elite WCAC and The Washington Post All-Met Honorable Mention … Led his team to the semifinals of both the state and conference tournaments … Played just one game as a junior due to the COVID-19 pandemic and scored 25 points against eventual Miami teammate Favour Aire and Bishop McNamara (Md.) … Started as a sophomore and helped his team to a 24-9 record … Competing for DC Premier on the AAU circuit, scored 21 points against top-ranked Team Final the first time the Miami staff watched him play in person … Villanova assistant coach Dwayne Anderson and UConn women’s basketball standout Azzi Fudd, the No. 1 recruit in the class of 2021, both attended St. John’s, the latter with Watson.

Personal: Full name is Christian Allen Watson … Goes by Chris and nickname is “CWat” … Born June 23, 2003 … Parents are Kirk and Shirlevia Watson … Father does computer IT for the government and mother works in customer service for a utilities company … Has an older brother, Jaylon, and an older sister, Imani … Majoring in business management … Hopes to start his own business after his playing career … Enjoys drawing and playing video games … Favorite athlete is Kevin Durant because he tries to model his game after him due to their similarities and both being from Prince George’s County, Md. … Best sports memory is hitting a game-winning shot to lead his school to the WCAC semifinals as a sophomore … Committed to Miami over Florida, Georgetown, Illinois, LSU, Marquette, NC State, Pittsburgh, Rutgers and South Carolina … Chose Miami because he felt it was the best situation for him and his family, due to its combination of great education, athletics and environment.