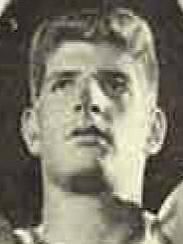 CHARLES HOLIBER, 6 feet 4, 215 pounds, 18 years old, sophomore in Business Administration. Holiber did his high school playing at Samuel Tilden in Brooklyn, N.Y., under Coach Jerry Gold. He’s a rugged athlete who does a good job of getting the ball in those under-the-goal melees and isn’t pushed around by anyone, no matter what the size. He’s a good competitor, a capable shooter and a cager who should develop into a good all-around player. Charlie needs more experience, however, and this season should find him picking up spot assignments for the most part.

CHARLES HOLIBER,  Senior letterman, 6 ft. 4, 215 lbs. HS coach, Jerry Gold. Business Administration major, Charley has been a little used reserve in his U. of Miami basketball career and appears to be in line for another year in which his greatest services to the squad are on the practice floor. Actually, he is a pretty rugged athlete, can hold his own in the under the basket melees. He had the best night of his UM career against Rollins last year when he hit two of five from the field and rolled in seven of eight on free throws, which is acceptable in any competition.