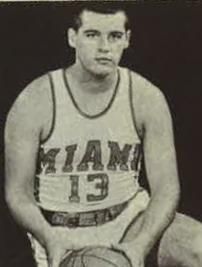 At Miami: Bernie transferred to Miami after a year on the varsity squad of Kentucky and spent much of the last season adjusting to the Miami style of play and getting back the momentum he lost through the transfer…He appears set to again display the floor skill, ball handling ability and shooting wizardry which made him a high school great…He started slowly last year but had a 17-point game against Rollins, plus six rebounds…He scored eight in the Providence finale in Madison Square Garden and did an outstanding job during Miami’s great rally in that game.