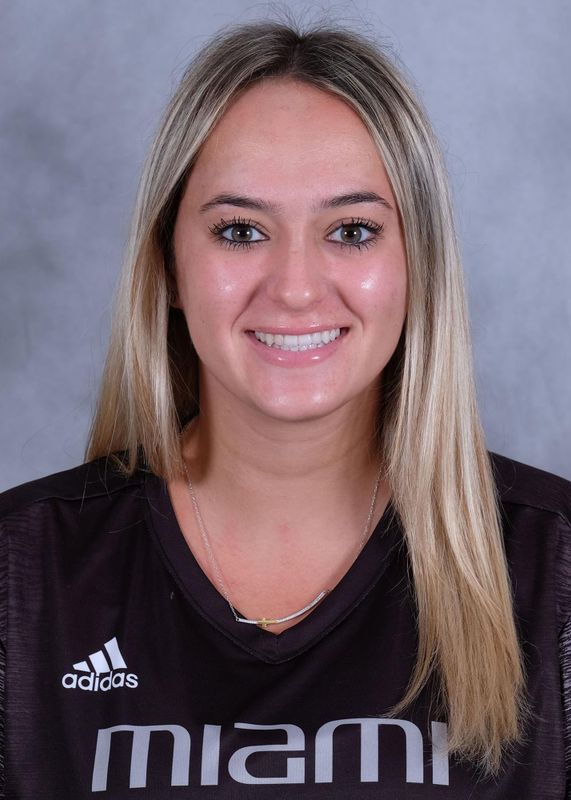 2018 (Sophomore): Earned the start at central midfield in each of the first 14 matches, and started 15 out of 18 overall … Attempted 10 shots, putting three on goal … Amassed 1,030 minutes of playing time … On the field for at least 50 minutes 14 times, including 70-plus on five occasions … Earned a pair of shots and first shot on goal as a Hurricane in 4-1 victory over FIU (8/19) … Posted a shot on goal in 71 minutes of action against Vanderbilt (8/24) … Notched a season high three shots and played a season-high 89 minutes at Jacksonville (9/6) … Tallied a shot on target in the ACC opener at Clemson (9/14) … Earned her 15th start in the season finale against ninth-ranked Florida State (10/25), and helped the team record a clean sheet.

As a Freshman at Rutgers (2017): Played in all 21 of the team’s matches, making 19 starts … Logged two goals and two assists, helping the Scarlet Knights to a 13-2-6 record … Topped 60-plus minutes 11 times … Scored the eventual game-winning goal in Rutgers’ NCAA Championship Round of 64 over La Salle.

Club: Member of PDA soccer club, one of the top ranked soccer clubs in the country … Played for the U-18 PDA ECNL team, which ranked fourth in the country… ECNL National Finalist with PDA in 2014 and 2013 …

International: Played with the Portuguese National Team … Has attended numerous U.S. Women’s National Team Camps, including U-14, U-15 and U-17.

Personal: Full name is Alexa Ferreira … Last name is pronounced Fur-Air-Uh … Born Feb. 6, 1999 … Daughter of Phil and Liliana Ferreira … Has three siblings, Brittany, Chloe, and Anthony … Majoring in sport administration with a minor in public relations … Favorite athlete is Cristiano Ronaldo of the Portuguese National Team … Chose Miami because of the beautiful campus and the coaching staff, as well as her desire to compete in the ACC.