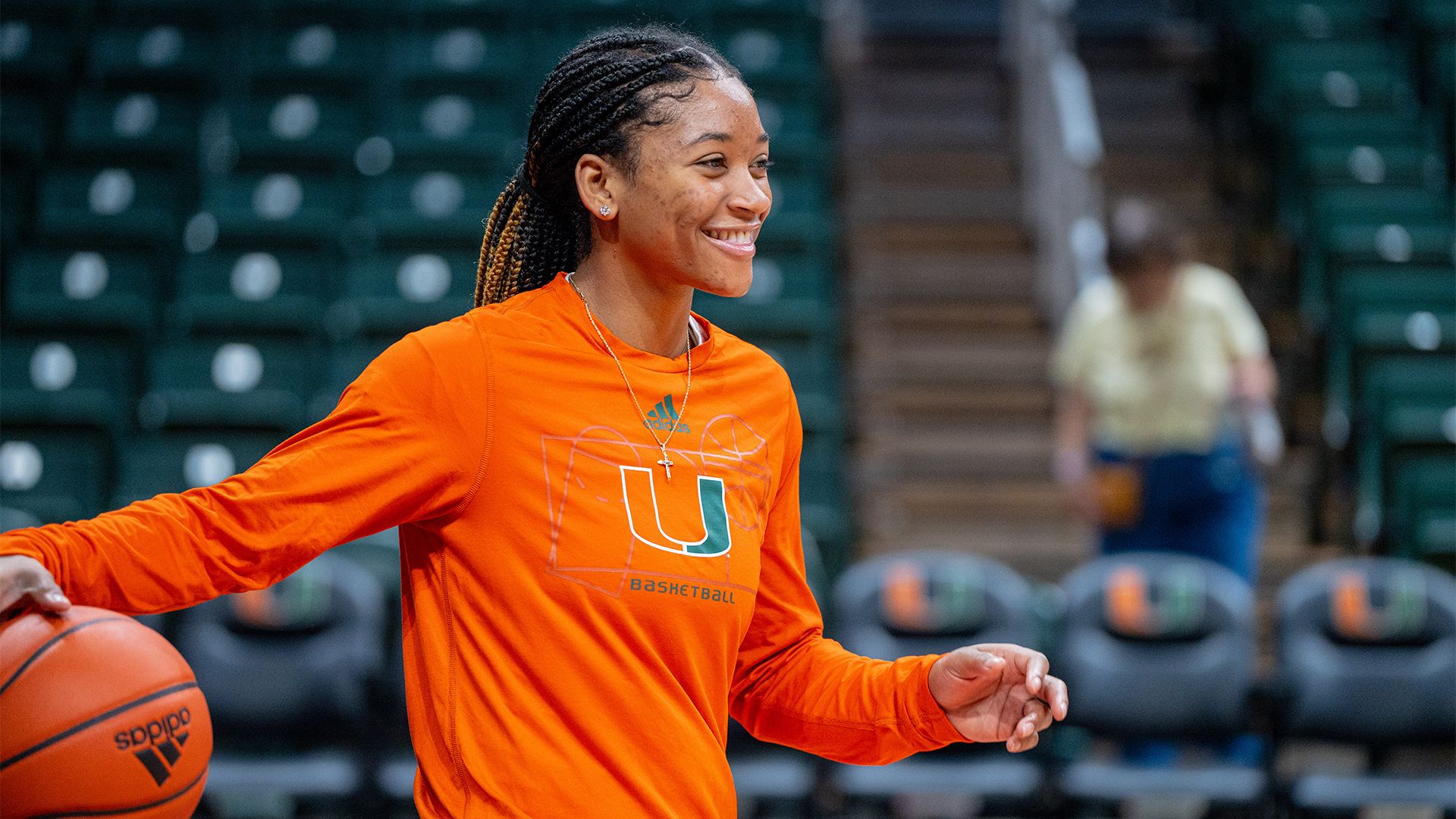 A former star at Jacksonville’s Bishop Kenny High School, Roberts had been recognized as the Florida Times-Union Player of the Year as a senior. A local television station had twice named her its player of the year and she’d led her high school to a pair of state runner-up finishes.

She’d considered offers from Virginia Tech, Temple, Seton Hall, Arkansas, and several other programs before ultimately choosing the Hurricanes. All of that, Roberts figured, would help pave the way for her to make a quick impact at Miami.

That wasn’t quite what happened.

Though she saw action in 28 games last season and even notched the first double-digit scoring outing of her career in a February win over Pittsburgh, Roberts finished the year averaging just 1.9 points and 1.5 rebounds per game. Her average playing time? Eight minutes per game.

Roberts had, of course, hoped for a bigger role as she played her first year of college basketball.

Still, as she waited for her moment, she continued doing her best to grow as a player.

She was on time for every early-morning workout. She spent time in the weight room. She listened carefully when coaches and older teammates offered advice. And if there were ever any moments where doubt crept in, she connected with family, friends, and even her high school coaches to keep her spirits up. Her faith made a difference, too.

“It was very tough, not playing at all or some games, I would only play a little bit. Not knowing when I would play was hard,” recalled Roberts, now a sophomore. “But I just still kept working…I’d do workouts, do shooting. Even in the offseason, during the summertime when I went home, I went in the gym every single day. I was never not in the gym. I knew an opportunity would come up. You just have to be patient, you know?”

Roberts’ patience – and persistence – have been rewarded.

Last week, in the wake of an injury to veteran Destiny Harden, Roberts made the first two starts of her Miami career, both coming against ranked opponents.

The ultimate result? Two wins over top-25 teams, a new career-high in points scored and a growing confidence that Roberts and the Hurricanes are both finding their rhythm as the new year begins and the conference schedule heats up.

“The story of the game, without any question, is this young lady right here, Jasmyne Roberts,” Hurricanes head coach Katie Meier said after Roberts totaled a game-high 23 points and a team-high eight rebounds in Miami’s 77-66 win over then ninth-ranked Virginia Tech on Sunday. “She’s no understudy. I think she’s been waiting her turn, waiting her turn, and waiting her turn and she’s just so confident right now…

“Jas is the most positive player on our team…She brings so much. She uplifts her teammates all the time, even when she wasn’t getting the minutes she wanted. She is the heart and soul that uplifts this team and keeps everyone in it. And her positivity kept her in it. Now, she’s just playing out of her mind. It’s just what college athletics is supposed to be…As a freshman you don’t play as much as you want, but you hang in there, you go to work, you talk to your family and your coaches from high school and they say keep working and she did…It kept her faithful and I couldn’t be happier.”

More than once in Miami’s victories over North Carolina and Virginia Tech, Roberts hasn’t looked like a sophomore trying to find her footing.

She’s been confident and assertive. She’s notched double-digits in both of her starts, and was a force against the Hokies, shooting 8 of 12 from the field and 5 of 7 from 3-point range.

Her effort defensively made a difference, too.

“To do what she’s done and her scoring, Jas is a very reliable person. You can trust Jas. She’s gotten her reps. Her mind is calm, very, very calm. So we were confident there. But the rebounding is what’s really been a surprise, more so than the scoring,” Meier said. “Jas has been getting almost double-doubles. She got huge rebounds in the end there.”

For Roberts, it’s been a heady week – but one she says she was ready to take on, given all the preparation that went into getting ready for her first collegiate starts.

There was the work she’s done since arriving at Miami, of course. But the guard credits her family with helping her develop her game and become a tough competitor.

Her cousin, Shaneese Bailey, played two seasons for Meier and the Hurricanes after transferring from Florida Atlantic in 2015. And cousins Chris Milton and Champ Bailey starred in the NFL.

Growing up in a family like that, Roberts said, pushed her to excel, too.

Now, with Miami looking to extend its win streak to four games when it travels to face Georgia Tech on Thursday, Roberts says she is ready to continue contributing in whatever way the Hurricanes need.

Her work at Miami continues – with the added benefit of a few lessons learned along the way.

“I’ve learned that strength comes in your struggles. I feel like I’ve proven myself. I’m stronger than I thought I was. You’ve got to struggle a little bit to finally get what you want and I just stayed really hopeful and positive,” Roberts said. “Coach said it, I’m very positive and I’m always uplifting others. That’s something I’ve learned…And I’m going to keep working. The work doesn’t stop because I had one great game. I’m going to get back in the gym and I feel like I need to just stay confident. A lot of basketball is confidence…I just feel like for myself, I’m going to keep working hard. It doesn’t stop here.”