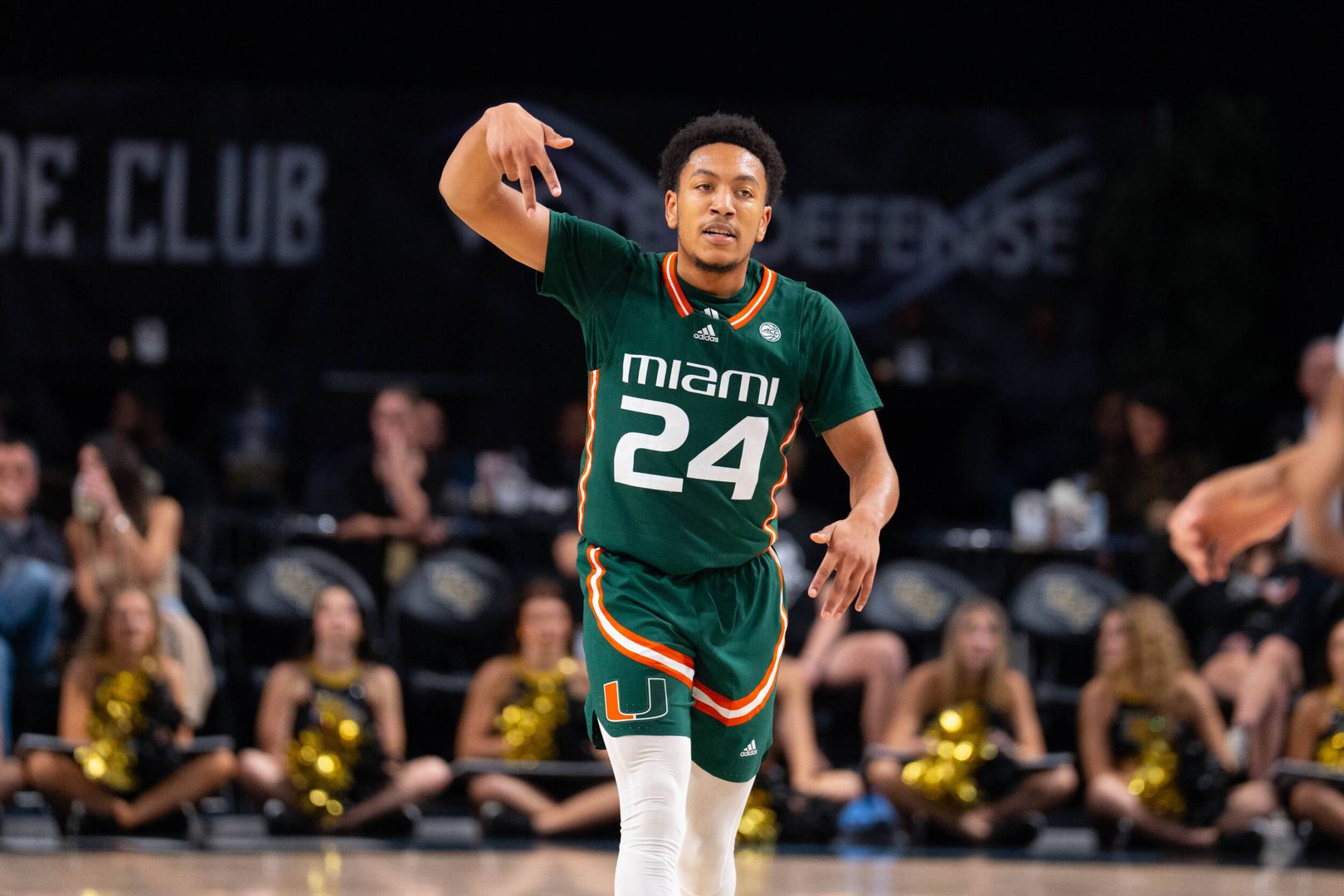 ORLANDO, Fla. – The University of Miami men’s basketball team registered a 66-64 victory Sunday evening at UCF in its first road game of the 2022-23 regular season

Third-year sophomore guard Nijel Pack scored a team-high 16 points on 7-of-10 shooting for Miami (6-1) in the triumph at Addition Financial Arena.

“Clutch performance versus an outstanding UCF team. Johnny Dawkins has done an amazing job. They’ve got size, they’ve got athletic ability, they’ve got shooting ability,” Miami head coach Jim Larrañaga said. “Darius Johnson was impossible to guard, but our guys rose to the occasion; they put us in position [to win]. At the end of the first half, we did a great job, got a six-point lead. And then, at the end of the game, guys stepped up and made big plays.” 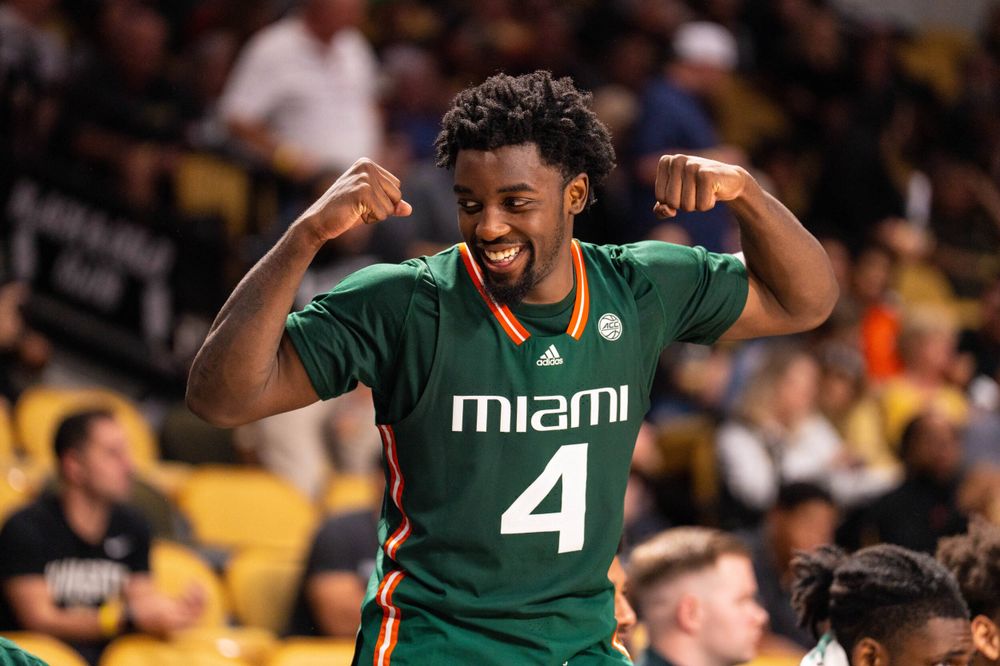 Both teams went scoreless for a concurrent stretch of 4:28 in the first half, part of a 6:34 span during which they shot a combined 0-for-14 from the field. The streak ended with a banked-in 3-pointer by sophomore guard Wooga Poplar and he quickly followed it with a one-handed dunk to tie the score at 20 with 3:30 on the clock.

The Philadelphia native’s surge sparked a 17-6 run, capped with a half-court buzzer-beater by fourth-year junior Isaiah Wong, to cap the frame and give Miami a 32-26 edge over UCF (5-2) at the break.

Although Miami extended its lead back to eight with just 2:56 left, the Knights sliced the deficit to just one, 65-64, with 11.3 ticks to go after making four consecutive shots. Wong then went to the line with 8.3 to play and hit one of two, but UCF’s CJ Walker got fouled with 1.4 seconds remaining and had a chance to tie it. The senior forward missed both and Miami held on, improving to 5-0 on the road all-time against the Knights.

Although UCF recorded a 43-9 mark in bench points, the Hurricanes had a 14-7 and 17-10 ledgers, respectively, in fast-break and second-chance points. The victors also limited the Knights to 23.5 percent (4-of-17) shooting from 3-point range.

Pack, who added three and assists and just one turnover in 29 minutes, led Miami in scoring for the second game in a row. Poplar finished with 12 points, made multiple 3-pointers for the first time as a collegian and added a career-best three steals to pace all players in a career-high 28 minutes of action.

Sophomore guard Darius Johnson scored a career-high 24 points on 9-of-15 shooting off the bench, notching 22 on an 8-of-12 mark in the second half alone. Senior guard/forward Brandon Suggs added 11 points on a 5-of-6 clip, while the Hurricanes held the rest of the Knights to 10-of-32 (31.3 percent) shooting.

Miami now returns home to Coral Gables, Fla., for a matchup with Rutgers in the ACC/Big Ten Challenge, with action slated for Wednesday at 7:15 p.m., live on ESPNU from the Watsco Center.

MIAMI HURRICANES POSTGAME NOTES
– The Hurricanes stopped the Knights’ five-game streak, two of which came against Power Five foes, of holding opponents under 60 points.
– Through the first 16 of the contest, the two sides combined for both 16 turnovers (eight each way) and 13 made field goals (seven for Miami, six for UCF).
– After scoring 15 points in the opening 16 minutes, the Hurricanes went on a 19-6 run over the next 4:34 to take a then-game-high eight-point lead, 34-26.
– The visiting team has now won each of the last six on-campus meetings between the Hurricanes and Knights, dating back to 12/27/02 in Orlando.
– The Hurricanes have now won five consecutive non-conference road games over the course of four seasons—they played none in the COVID-shortened 2020-21 year—dating back to 11/12/19 at UCF.
– With 702 wins, Larrañaga tied Larry Hunter for No. 33 all-time among DI head coaches.
– Wong surpassed three-time NBA champion James Jones (1999-2003) for No. 15 on Miami’s all-time scoring list, now owning 1,362 points at The U.
– Poplar scored in double figures for the third time in his career, with each coming against an in-state opponent and two of them in the last five outings.
– Omier, who posted his fourth double-double of the year, fouled out with 1.4 seconds left, the first Hurricane to do so in 2022-23.
– Johnson is the first player to score 20 points in a half in a Miami game since Wong logged 21 after the break against No. 16/18 Louisville on 1/16/21 and is the first with 22 since the Hurricanes’ Kameron McGusty on 12/21/19 versus Coppin State.
– The last opposing player with 20-plus points in a half against Miami was Coby White of eighth-ranked North Carolina, who had 23 on his home floor on 2/9/19. 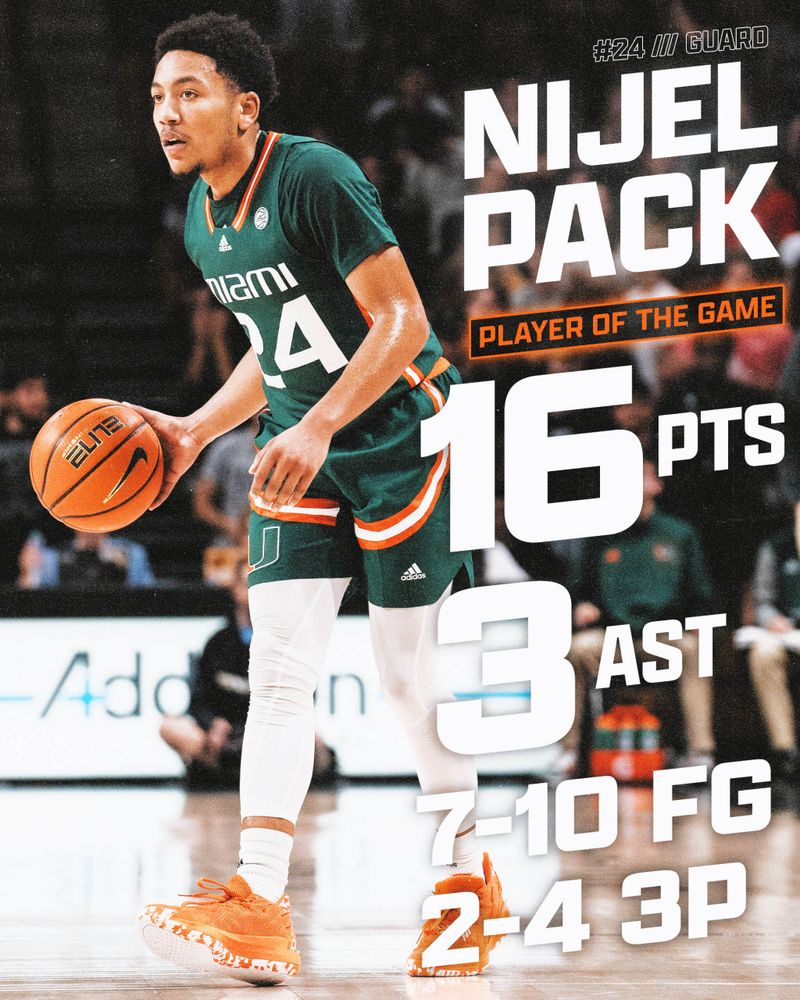