CORAL GABLES, Fla. – The University of Miami women’s basketball team (6-1) is headed to the championship game of the Miami Thanksgiving Tournament after defeating the North Carolina A&T Aggies (3-2), 97-54, Friday afternoon at the Watsco Center.

“We’re happy to be back home and hosting this high-level tournament again. It was great to see everyone get in the game and score,” head coach Katie Meier said. “We’re finally hitting the three and we needed that. We won the bench points battle, 51-12, and that is so important for us.” 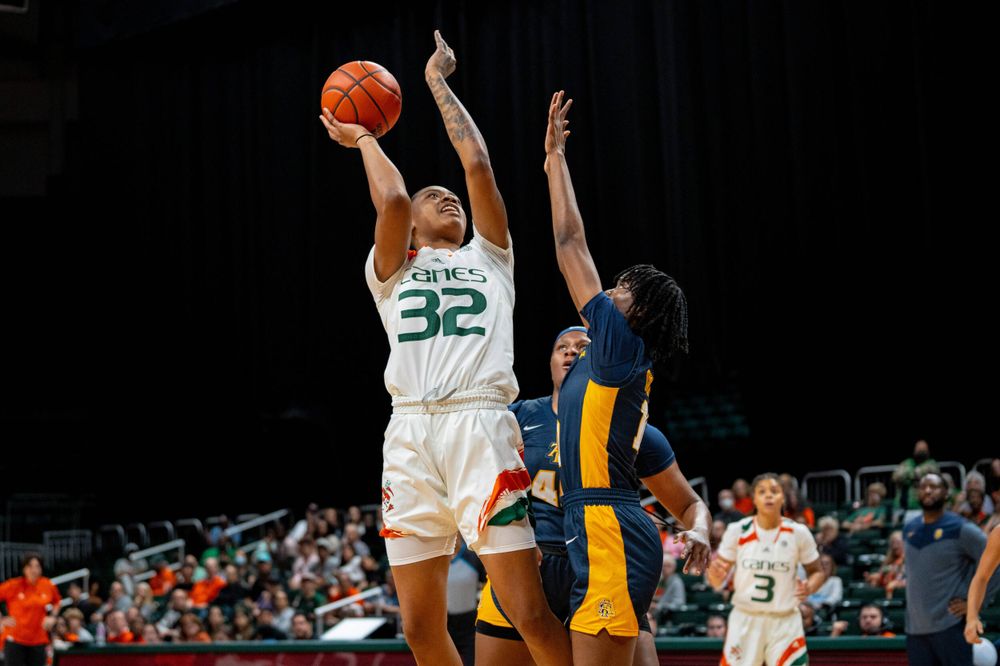 The Hurricanes (6-1) reached the 90-point mark for the first time since 2018 and shot a season-best 53.2 percent from the field. Seven different Hurricanes recorded a 3-pointer in the game, paced by senior Haley Cavinder who tallied three of Miami’s 10 makes from downtown.

The Hurricanes’ defense was dominant from the start, forcing 21 first-half turnovers and recording 26 points off giveaways. Miami tallied 13 steals in the first 20 minutes, five of which came from Dwyer.

On offense, Miami poured in the most points in a half (56) since Nov. 6, 2018, when they scored 56 against FIU. Every Hurricane recorded a point in the first half and Miami shot 54 percent from the field as a team to take a 56-21 lead into halftime.

The third quarter was all offense as the two teams combined for 48 points, with North Carolina A&T holding the 25-23 edge in the frame. Haley Cavinder caught on fire from beyond the arc, knocking down 3-of-4 shots from 3-point range.

The Miami defense locked down in the final 10 minutes, holding the Aggies to just eight points in the fourth quarter. Sophomore Jasmyne Roberts provided the Hurricanes with the spark on offense, recording seven on her nine points in the final frame to give Miami the 97-54 victory.

The Hurricanes will take on the Columbia Lions in the championship game of the Miami Thanksgiving Tournament on Sunday. The game will begin approximately 30 minutes after the conclusion of the consolation game, which will begin at 12 p.m. The game will air on ACC Network Extra.