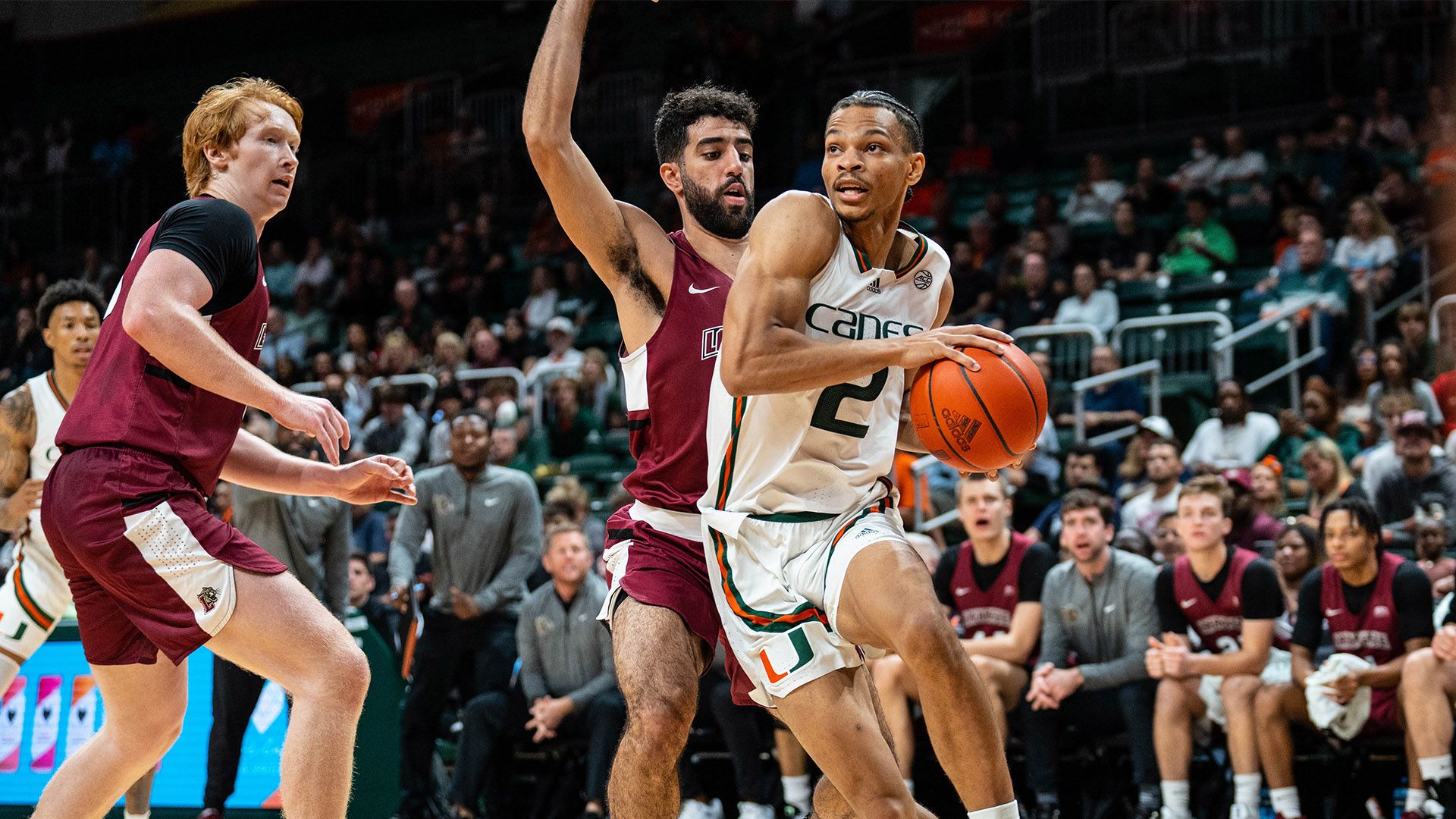 Playing in front of a strong crowd including 1,505 students, Miami (1-0) got a team-high 16 points each from third-year sophomore guard Nijel Pack and fourth-year junior guard Isaiah Wong, while third-year sophomore forward Norchad Omier logged a double-double at the Watsco Center.

“My heart rate must’ve jumped 50 beats from the way that game was played,” Miami head coach Jim Larrañaga said. “I thought Lafayette did a great job. We were very fortunate to come away with a victory.”

Despite 10 first-half rebounds by Omier in his Miami debut, Lafayette (0-1) took a narrow 30-28 edge into the locker room.

The Hurricanes scored the first 10 points after the intermission, grabbing an eight-point edge, 38-30, with 16:20 to play. The Leopards eventually used an 8-0 run to even the score at 43 with 11:10 left, but Miami held them scoreless for the next 5:29 and scored nine consecutive points to go in front, 52-43.

Lafayette got back within four, but an 8-0 run capped by a 3-pointer by Pack put Miami ahead by a then-game-high 12 points, 62-50, with just 2:36 to go. The Hurricanes eventually earned the 13-point victory for their third straight season-opening win.

Pack, who shot 4-of-10 from 3-point range, added five rebounds along with his 16 points, while Wong matched his total on the glass and dished out a game-best four assists.

Omier finished with 11 points and a game-high 15 rebounds, good for the most by a Hurricane since Dec. 12, 2020, nearly two full years ago. Eight of his boards came on the offensive end, a figure greater than any other player’s full rebound total on either team. Fifth-year senior guard Jordan Miller added nine points and seven boards.

“I think, for us to be successful, we have to have five guys average double figures,” Larrañaga said. “If we do that, it makes us harder to defend. We have so many different weapons.”

Sophomore guard CJ Fulton paced all scorers with 17 points for Lafayette, shooting 6-of-9 overall, including 5-of-7 beyond the arc. Kyle Jenkins, the only other Leopard in double figures, chipped in 10 points and a co-team-high seven rebounds.

Miami finished the night plus-12 on the glass, 46-34, and did not allow a single fast-break point. It also conceded fewer points than it did in any game during the 2021-22 campaign.

The Hurricanes are back in action Friday at 7 p.m. when they host UNC Greensboro at the Watsco Center, live on ACC Network Extra. Tickets are available HERE.

MIAMI HURRICANES POSTGAME NOTES
– The 54 points conceded were two fewer than Iowa State scored against Miami in the Sweet 16 on 3/25/22, the lowest mark it gave up all year.
– The last time Miami allowed fewer than 55 points was 12/8/20, when Purdue scored just 54 in the ACC/Big Ten Challenge.
– Miami’s 34 3-point attempts surpassed its highest mark of the 2021-22 season, which was 30 on 1/5/22 versus Syracuse.
– The Hurricanes’ 46 rebounds eclipsed their total in all but one game last season, a 49-board performance on 11/21/21 against Florida A&M.
– Omier’s 10 rebounds in the first half matched the highest total by a Miami player in any half last season, as Kameron McGusty had 10 in the second half against North Texas on 11/26/21 in Kissimmee, Fla., and Jordan Miller logged 10 in the second half on 3/5/22 at Syracuse.
-The 15 rebounds by Omier not only surpassed the highest mark by a Hurricane last year—13, recorded twice—but marked the most by a Miami player since Nysier Brooks had 15 on 12/8/20.
– Omier’s double-double marked the first by a Hurricane at home since Kameron McGusty on 1/18/22 versus North Carolina.
– Wong passed DJ Vasiljevic (2016-20) and Kameron McGusty (2019-22) to move up to No. 21 on Miami’s all-time scoring list, now owning 1,284 points.
– Fourth-year junior guard Harlond Beverly returned to action for the first time in 347 days after missing the majority of the 2021-22 season due to a back injury and connected on his first 3-pointer in 674 days, dating back to Jan. 2, 2021.