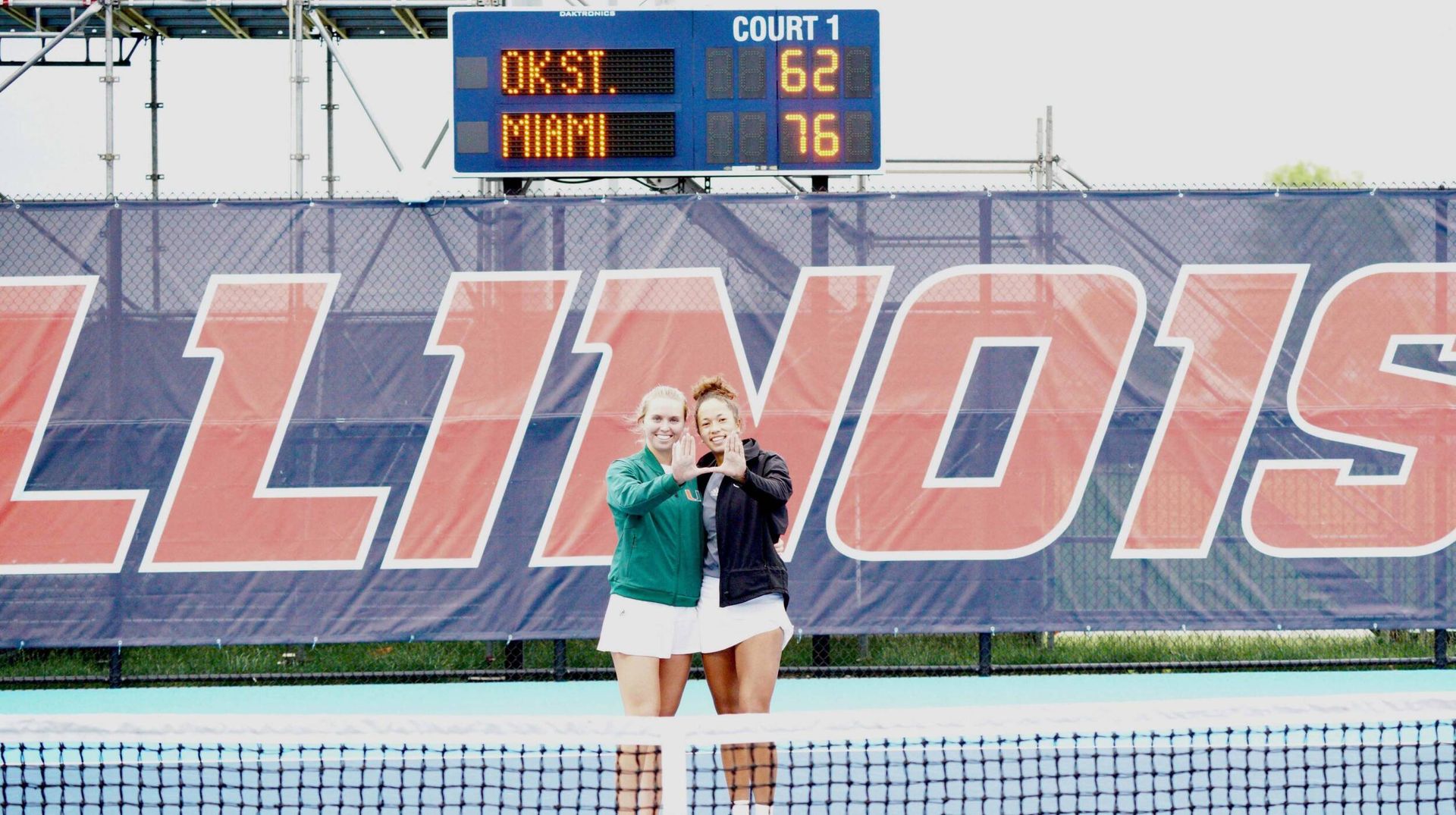 In their fourth win in as many days, including their third straight over a higher-ranked foe, Achong and Richardson tallied a 7-6 (7-5), 6-2 win against No. 12 Ayumi Miyamoto and Lisa Marie Rioux of Oklahoma State at the Khan Outdoor Tennis Complex.

The Miami duo, ranked No. 13, is the third in program history to reach the NCAA Doubles Championship title match and the first since 1988. In addition, this is now the third consecutive NCAA tournament in which a Hurricane player or pair is in the national championship.

“[The Cowgirls] were crafty. They, I think, a tendency to kind of lull you to sleep in points or force you to make bad decisions,” Miami head coach Paige Yaroshuk-Tews said. “We knew that going into the match and we spoke about it. I think our girls were able to find the right mix of being aggressive, but also being patient, which is what they needed to do.” 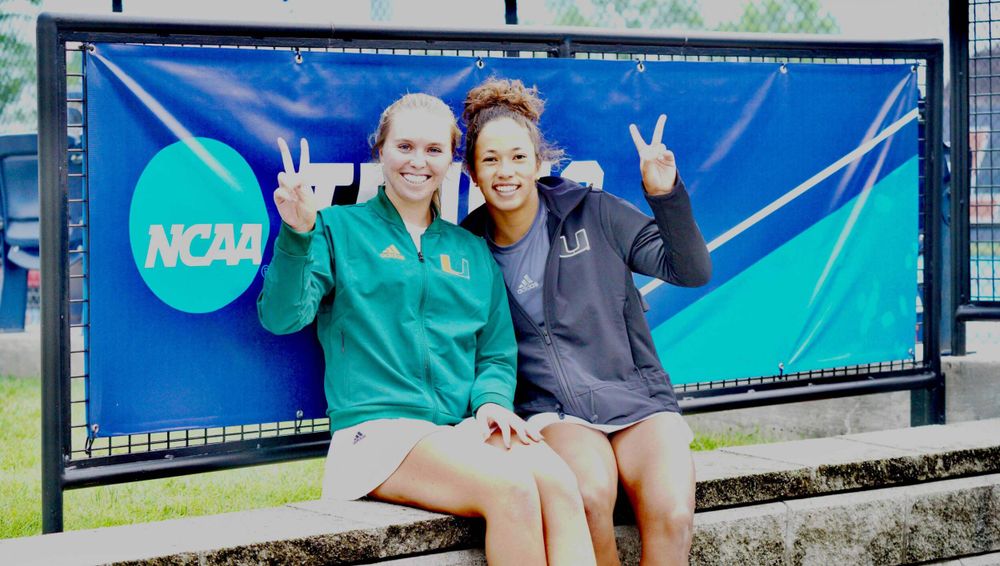 The Cowgirls opened the match with a pair of wins, the latter a break at deuce. Achong, a fourth-year junior, and Richardson, a fifth-year senior, answered with back-to-back games of their own to pull even.

Oklahoma State then took the next two games, the second a break after trailing 0-40, to go in front, 4-2. Miami then break at love and held, continued the pattern, to level the opening set at 4-4.

Miyamoto and Rioux held to go up 5-4 and held a set point at deuce in the next game, but Miami fought it off to again tie the set. After Oklahoma State held at deuce, the Hurricanes held at love to tie the set for a fourth time, at 6-6.

The Cowgirls grabbed a 2-0 lead in the tiebreaker, but Miami won the next two points to knot it up. The sides then exchanged points to make it 3-3 at the changeover, after which Oklahoma State won back-to-back points, gaining a 5-3 advantage.

Achong and Richardson, though, won the last four points of tie tiebreaker to win it and grab the opening set.

As they did in the opener, Miyamoto and Rioux won the first two games of the second. From there, however, it was all Miami.

Achong and Richardson won three consecutive games to go ahead and then fought off two game points to break at deuce for a 4-2 edge. In the next game, they staved off three break point to earn a 5-2 lead and grab full command of the match.

The Cowgirls did not win a point in the final game, double-faulting on the first match point to give Miami the 7-6 (7-5), 6-2 decision. Along with winning the final six games, Achong and Richardson took the last seven points of the night.

Achong and Richardson are the fourth and fifth Hurricanes to reach the NCAA Doubles Championship title match. Ronni Reis won the title with Lise Gregory in 1986 and then finished as the runner-up in 1988 alongside Jami Yonekura in the program’s last such berth, 34 years ago.

Only three pairs before Achong and Richardson have won at least four career matches in the tournament, all in the 1980’s. Gregory and Reis posted an 11-3 mark, Ros Riach and Cathy Richman went 7-3 and Reis tallied a 4-1 mark with Yonekura.

Achong and Richardson will make the seventh appearance—fifth under Yaroshuk-Tews—in an NCAA individual championship match in program history, as Miami has placed a competitor in the singles final four times. The former total is tied with Texas for the sixth-most all-time.

In addition, Miami is the only school represented in a title match each of the last three tournaments, as Estela Perez-Somarriba won the singles crown in 2019 and fell in the championship in 2021. Only Texas has even logged two appearances in the past three events. No tournament was held in 2020 due to the COVID-19 pandemic.

“We talk about it all the time that anything is possible. We know how good Eden and Daev are, but to be able to be here and work themselves through the tournament, beating some of the competition that they’ve beaten along the way, it just makes me so happy,” Yaroshuk-Tews said. “They’re great kids, they’re good tennis players. They’ve stayed truly together as a team this entire season; they’ve been very supportive of one another. They’ve been incredible leaders in singles and as team players for this team this year. They’re truly a huge reason why we had the success we had. So, to see them enjoy the individual success now, I think, is a nice moment for them. Let’s try to end it the right way.”

For Richardson, this is her second appearance in the NCAA final, as she won the 2018 title alongside Jessica Golovin while at LSU. She joins UCLA’s Lauren Fisher (2002 runner-up, 2004 champion) and Georgia’s Marissa Catlin (1997 runner-up, 2000 runner-up) as the only players to twice make the NCAA doubles title match as an unseeded player. Catlin also lost in the final as the top seed in 1999.

In addition, Richardson is the 24th individual to make the NCAA Doubles Championship finale multiple times, including the first to do so at two different schools. Of the 17 multiple-time NCAA Singles Championship finalists, the only player to achieve that feat also did so once as a Hurricane, as Audra Cohen finished as the runner-up in 2005 at Northwestern and won the crown in 2007 at Miami. 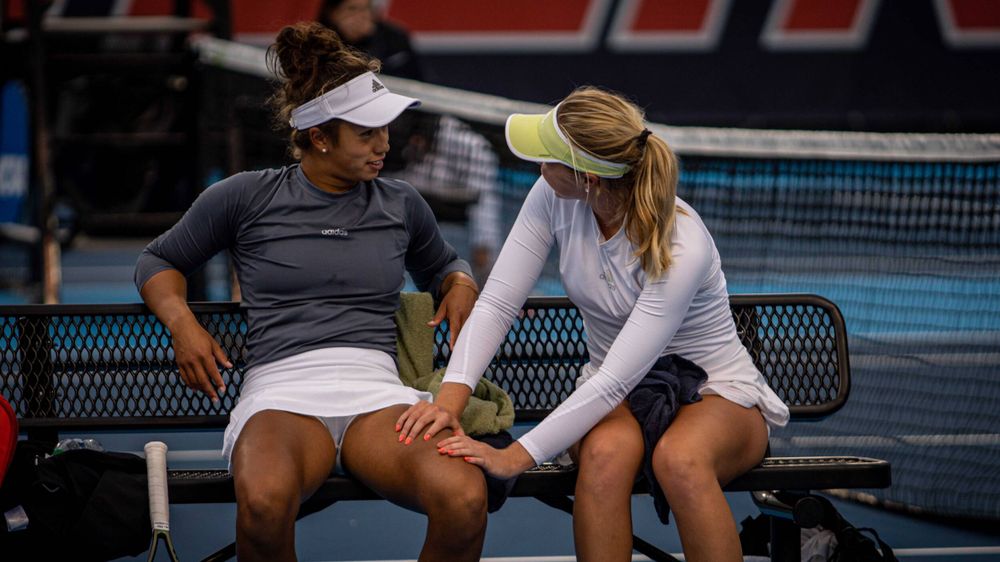 Saturday afternoon, in the final match of her illustrious career, Richardson will compete alongside Achong for a national title. The duo is set to face Jaeda Daniel and Nell Miller of NC State, the top-ranked and top-seeded tandem in the field.