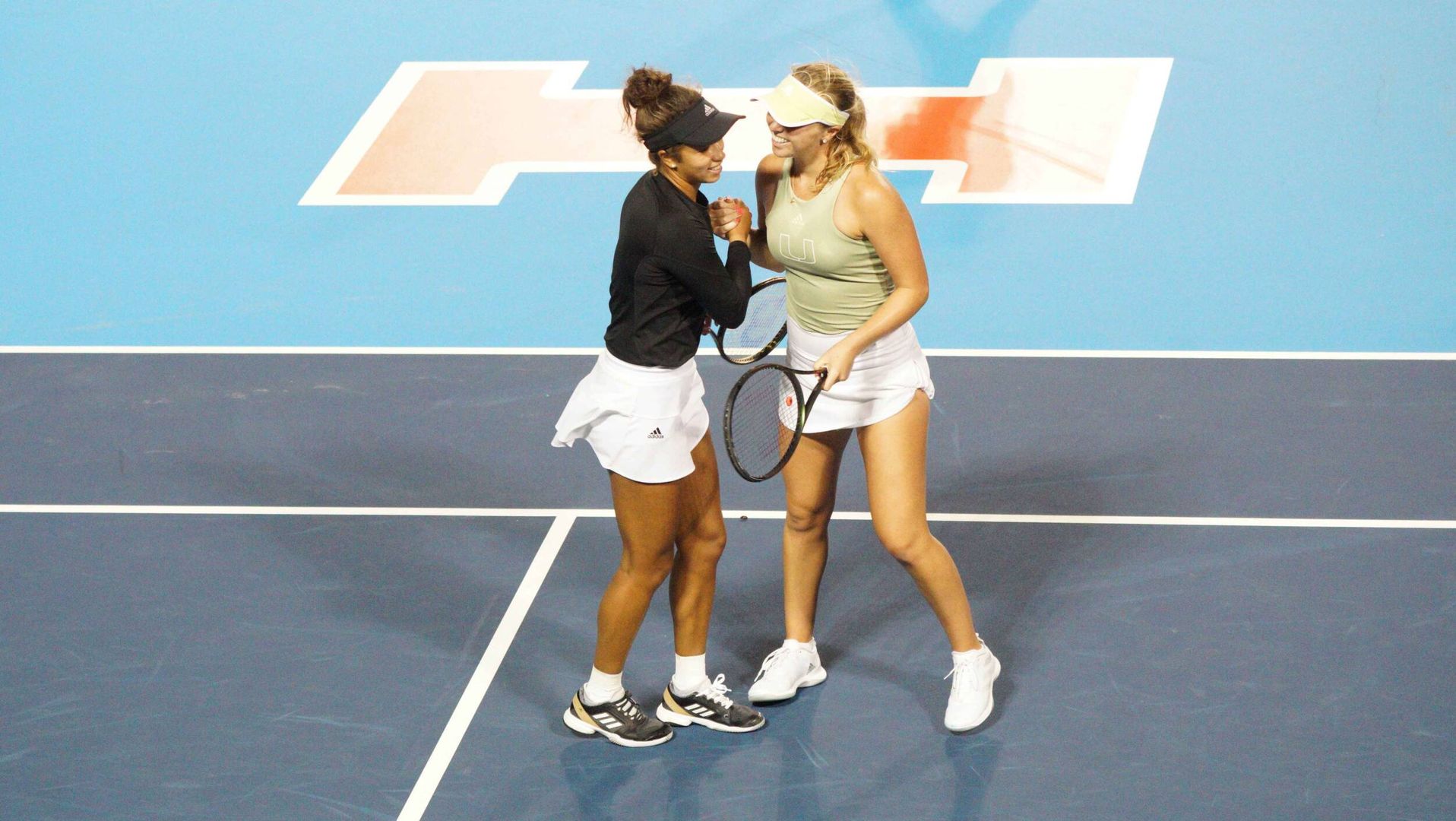 Achong and Richardson Upset No. 2 UNC to Reach NCAA Quarters

URBANA, Ill. – Daevenia Achong and Eden Richardson made history Wednesday night at the Khan Outdoor Tennis Complex on the campus of the University of Illinois.

The University of Miami women’s tennis players teamed up for a straight-set win in the second round of the NCAA Doubles Championship, clinching ITA All-America honors and earning a spot in the Elite Eight.

Their 6-4, 6-1 decision over second-ranked and second-seeded Fiona Crawley and Elizabeth Scotty of North Carolina marked the first victory by a Miami duo over a ranked pair in the NCAA Doubles Championship since 1992. Achong and Richardson form the first Hurricane tandem to reach the quarterfinals since 2014 and the first to garner All-America accolades since 2016.

“They just really stuck together,” Miami head coach Paige Yaroshuk-Tews said. “I think that Daev’s moves at the net have just been phenomenal, yesterday and today. I think that, as the match progressed, Eden’s play just kept getting better. She started returning aggressively. Honestly, [both of them were] just committed. [They were] committed to their plays and to their strategy from the beginning.”

In a matchup of duos featuring former NCAA doubles champions—Richardson won the title in 2018 and Scotty did so in 2021—Miami struck first with a break at deuce to begin the match. That started a streak of four straight breaks to begin the evening.

After the Tar Heels, who earned a 6-3 road triumph exactly two months prior in the tandems’ first meetings, held to go in front, Miami countered with three consecutive wins, the last of which came at love, to go in front, 5-3. Crawley and Scotty answered with a hold to make it 5-4 and then took a 30-40 lead in the 10th game, but Miami won back-to-back points to take the set, 6-4.

North Carolina opened the second set with a dominant hold, but the rest of the night was all Miami. The Hurricanes won back-to-back games at deuce to go ahead, 2-1. After extending the lead to 3-1, they rallied from a 15-40 deficit to break and go up, 4-1.

Achong and Richardson tallied a hold to take a 5-1 edge and then broke at love to clinch the victory. The duo won 10 of the final 12 games, including each of the last six, as well as took all five deuce games in the contest.

For Achong, the result clinched the first ITA All-America distinction of her career. For Richardson, it sealed her third, as she also claimed the plaudit in 2018 in doubles and 2019 in singles.

Achong and Richardson now the 30th and 31st ITA All-Americans in program history, notching the 70th and 71st total accolades. That includes them being the 22nd and 23rd Hurricanes to record ITA All-American honors in doubles, including forming the 17th unique pair to do so.

“Listen, I know it’s big for both of them. I think that was one thing that Eden was, obviously, very focused on doing this season,” Yaroshuk-Tews said. “So, for her to meet that goal is huge. Daev, first time being an All-American, she’s proven she can play with the best in college tennis. I hope that this just reinforces that for her.”

The last Miami duo to earn All-America recognition was Stephanie Wagner and Wendy Zhang in 2016, while the last tandem to reach the quarterfinals was Monique Albuquerque and Clementina Riobueno in 2014.

Additionally, when the last Miami duo took down a seeded pair in the tournament, it was Paula Iversen and Mariette Verbruggen 30 years ago against No. 5-8 Laxmi Poruri and Heather Wells of Stanford.

The last triumph over a top-four foe was in 1986, when Lise Gregory and Ronni Reis took down second-seeded Ann Hulbert and Gretchen Rush of Trinity (TX) to win the national title. In total, this is the fourth victory over a top-four seed by a Miami pair in the NCAA Doubles Championship, with the other three all between 1984 and 1986.

The Hurricanes will now square off with No. 11 Peyton Stearns and Allura Zamarripa of Texas, the back-to-back reigning NCAA team champion, Thursday at 5 p.m. ET for a spot in the Final Four. Stearns won NCAA Team Championship Most Outstanding Player in 2021, while Zamarripa did so this year.