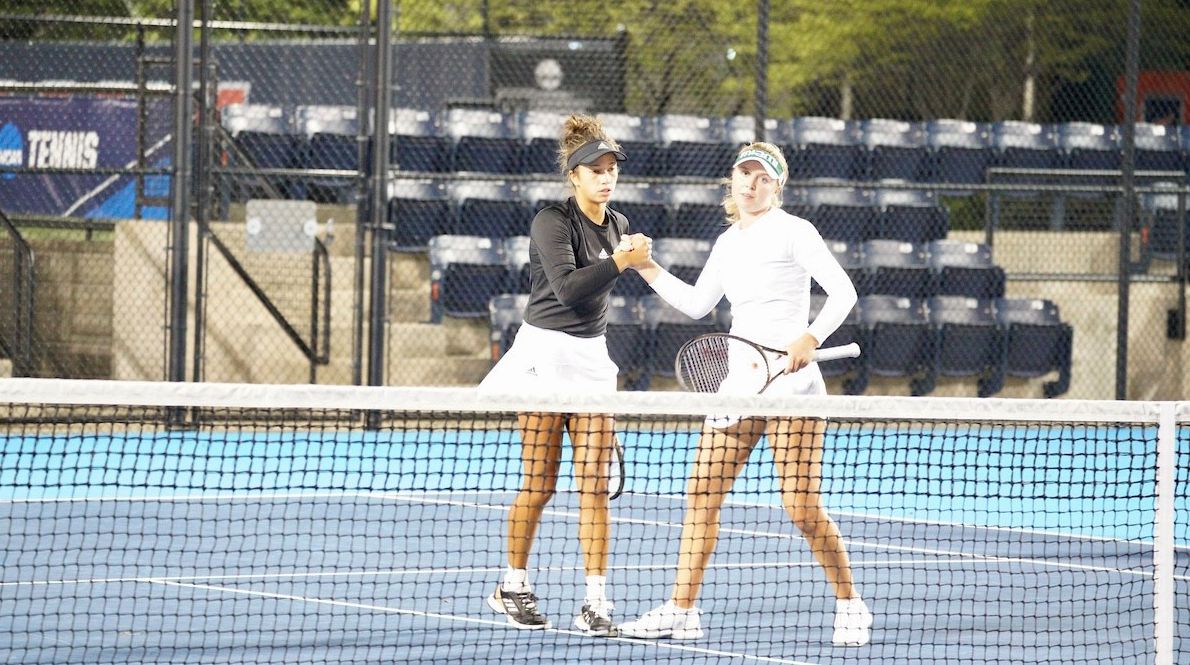 Achong and Richardson Advance to Sweet 16

URBANA, Ill. – For the first time since 2014, a University of Miami women’s tennis duo is headed to the second round of the NCAA Doubles Championship.

Fourth-year junior Daevenia Achong and fifth-year senior Eden Richardson logged a 6-2, 7-5 victory over No. 34 Julia Adams and Ellie Scoppe of Furman to cement a spot in the Sweet 16. In one of the final matches of the night at the Khan Outdoor Tennis Complex on the campus of the University of Illinois, the tandem improved to 8-4 against ranked foes this season.

“I thought we started out really strong. We made very few unforced errors,” Miami head coach Paige Yaroshuk-Tews said. “I think that Furman made some adjustments and we kind of reverted back to doing some things that we were talking about not doing in the first set. Once we brought the hype back into the match and we took some angles out of the match, I think it turned around. To be down two breaks in the second set and pull it off is a great effort.”

After dropping the first four games of the match, Achong and Richardson, ranked No. 13 nationally, won four games in a row to grab a commanding lead. They dropped the sixth game and faced a 0-40 deficit in the next, but took four straight points to break and go in front, 5-2.

The Miami pair closed it out the opener on their first set point, taking a 6-2 decision to grab control of the contest.

Furman cruised to a 4-0 lead in the second set, seeming poised to force a split, but the Hurricanes quickly recovered. Miami broke to stop the momentum and then consolidated it to make it 2-4.

The Hurricanes dropped the next game to make it 2-5, but countered with a hold and a break to pull within a game. Furman, though, went up 40-0 in its service game.

Once again, Achong and Richardson took four points in a row to earn a win, this time staving off a quartet of set points to pull level at 5-5. The pair then broke to go ahead, 6-5.

Out of the changeover, Richardson served Miami to a 40-30 edge, but Furman fought off a match point to even it at deuce. On the second opportunity, the Hurricanes put it away on a volley from Richardson at the net, sealing the 6-2, 7-5 victory.

“I think they’ve been playing great doubles all year. So, I think that this is just about continuing to do what they’ve done the entire season,” Yaroshuk-Tews said. “They work very well together and they’re both very established doubles players, as everybody is in this tournament. I think the energy they bring, [along with the] strategy, the good mindset, the volleys and the aggressive play, I think that they could do some damage.”

Although Miami did not have a pair reach the Sweet 16 in the past seven NCAA Doubles Championship events, it sent six players to the Final Four in the NCAA Singles Championship, including two to the title match, with one earning the crown.

Now, Achong and Richardson are the first Miami tandem to advance in the tournament since Monique Albuquerque and Clementina Riobueno reached the Elite Eight in Athens, Ga., in 2014.

The Hurricanes will face second-ranked and second-seeded Fiona Crawley and Elizabeth Scotty of North Carolina for a spot in the quarterfinals, with action slated for Wednesday at 9 p.m. ET. The matchup features a former NCAA doubles champion on each side, as Richardson won the title in 2018 while at LSU and Scotty claimed the trophy last year.