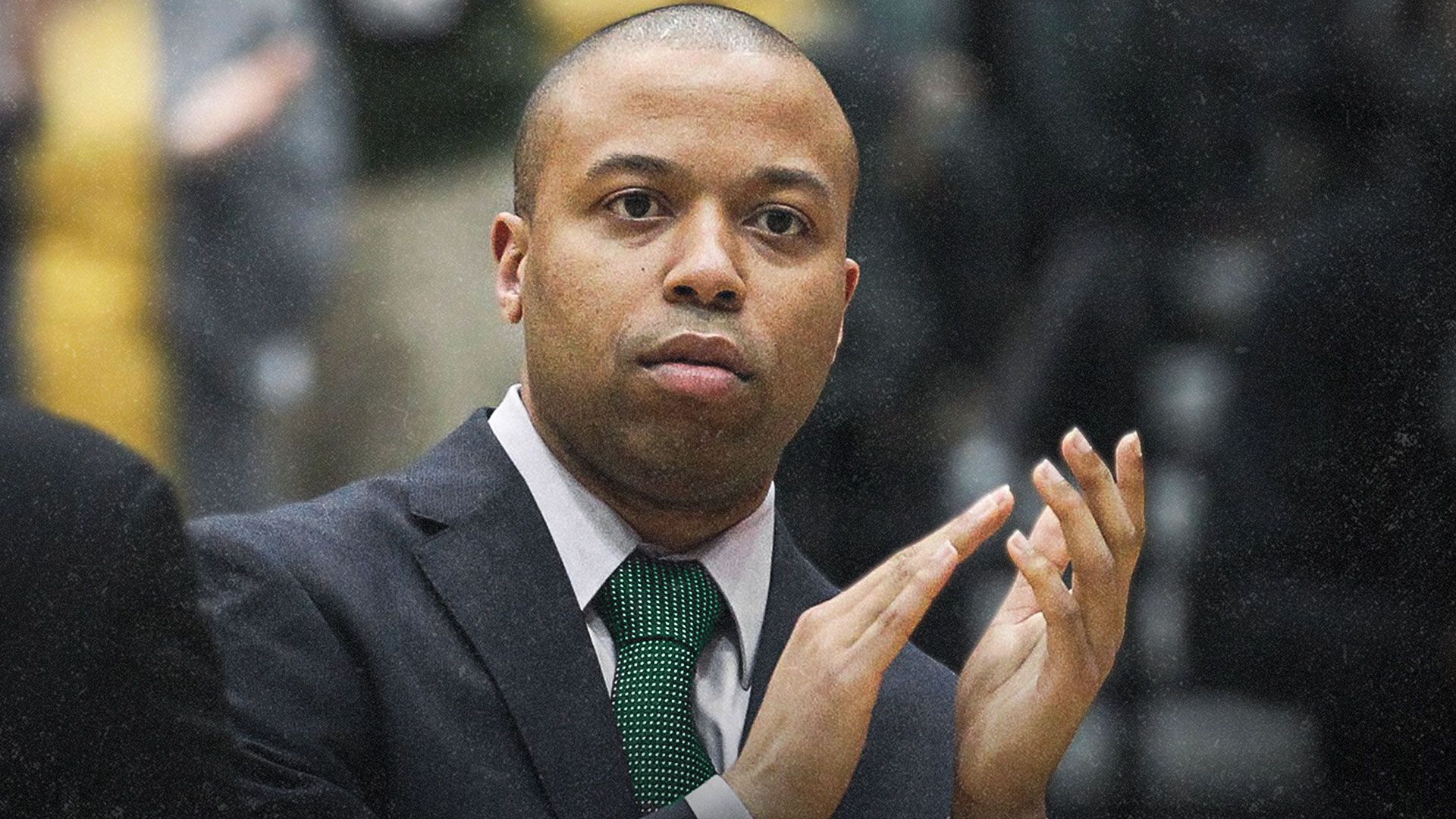 Kimble comes to The U with 14 years of Division I coaching experience, including the last four at the University of North Carolina at Charlotte.

“I’m humbled and excited to be a part of the University of Miami basketball program. I’d like to thank Jim Larrañaga for providing me with this amazing opportunity to come work for him, not only in the best conference in the country, but at one of the world’s most recognizable schools,” Kimble said. “I also want to express my deep gratitude and appreciation to Ron Sanchez and everyone else who made my time at Charlotte so special. That said, it’s truly an honor to be a Miami Hurricane. I will pour all I have into helping this excellent program continue to reach new heights and into assisting our players’ pursuit of their goals.”

In July 2020, Stadium’s Jeff Goodman ranked Kimble as a top-five assistant coach in Conference USA based off an anonymous poll of 20-plus coaches in the league.

A renowned recruiter, Kimble helped Charlotte sign the top class in CUSA each of the last four years. Included in that group is Jahmir Young, a three-time All-CUSA honoree, two-time first-team designee and the 2020 CUSA Freshman of the Year.

Two years later, during the recent 2021-22 season, the 49ers exceeded that overall win total by going 17-14. Charlotte also again finished 10-8 in CUSA play, giving the team multiple winning league records in a three-year stretch for the first time since 2003-06.

The program posted its most road wins (six) since 2011-12 and most conference road victories (four) since 2009-10, both during its A10 era. Meanwhile, Young placed third in the CUSA in scoring at 19.6 points per game, his second straight top-five finish.

“Kotie is an excellent addition to our program. He is an intelligent coach with an energetic personality who will mesh well both with the staff members and players already here in Coral Gables,” Larrañaga said. “Kotie’s 14 years of coaching experience have him well-prepared to make an immediate impact at Miami. People whom Kotie has worked for and with rave about him. He has climbed his way up through the industry with a strong work ethic, excellent recruiting acumen and tremendous knowledge of the sport.” 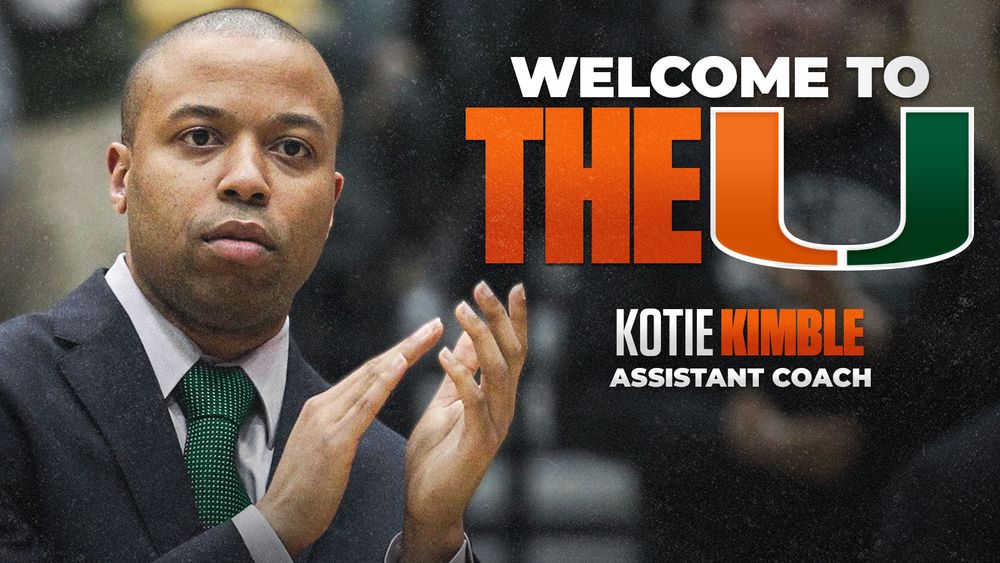 Prior to his four seasons at Charlotte, Kimble spent eight years, 2011-18, at the College of William & Mary, coaching a total of 17 CAA All-Academic Team honorees. From 2013-18, the Tribe had the best five-year stretch in program history, posting a combined mark of 96-62, including a 54-34 record in CAA action.

William & Mary won 17-plus games all five seasons and tallied double-digit conference triumphs each time. The Tribe won 20 games three years in a row, 2013-16, for the first time since 1949-51.

In 2014-15, William & Mary won the CAA regular season title for the third time ever and first since 1998. That year, the Tribe went 20-13 (12-6 CAA), reached the NIT for the third time in program history and made the CAA Tournament title game for the second year in a row.

Over the course of those five years, William & Mary set program records for points, points per game, three-point percentage, three-pointers made, free throw percentage, assists, assists per game, assist-to-turnover ratio and fewest turnovers. It finished top-55 in KenPom offensive efficiency and top-20 in effective field-goal percentage each year, including placing top-35 in the former area twice and top-six in the latter category thrice.

During the last of those five seasons, in Kimble’s final year on staff in 2017-18, William & Mary became the first team in NCAA history to shoot 50 percent from the field, 40 percent from 3-point range and 80 percent at the line in a season. The Tribe led the nation in the latter two categories, at 43.4 and 81.1 percent, respectively. Kimble helped the team to a school-record 85.0 points per game, the third-best mark in CAA history.

In addition, over Kimble’s final six years in Williamsburg, Va., the Tribe was one of only two teams, alongside Gonzaga, to rank top-30 nationally in field-goal percentage each season. He helped recruit and develop three 1,000-point scorers, including the program’s all-time leading scorer, Marcus Thornton, who tallied 2,178 points and won 2014-15 CAA Player of the Year honors.

Kimble got his coaching start at the University of North Carolina at Asheville, working under Eddie Biedenbach from 2008-11. The Bulldogs won double-digit Big South games, posted a winning conference record and finished top-four in the league each season.

In 2010-11, UNC Asheville went 20-14 (11-7 BSO) and won the league tournament to earn the second NCAA Tournament berth in program history. Once in the field, the Bulldogs beat Arkansas-Little Rock to earn their first NCAA Tournament victory.

Additionally, that UNC Asheville team was just the second since 1986 to win 20 games. It finished No. 11 in the nation in defensive turnover percentage, per KenPom, a 223-spot improvement from the prior year. Two Bulldogs earned All-Big South distinction and three garnered All-Big South Tournament accolades, including Matt Dickey claiming first-team status in the former and MVP recognition in the latter.

A native of Edgefield, S.C., Kimble graduated from Coastal Carolina University in 2007 with a degree in history. During his time as an undergraduate, he served as a student assistant for two years under Pete Strickland and two under the renowned Buzz Peterson.

Kimble helped the Chanticleers to a 20-10 (12-4 BSO) record in 2005-06, as the team finished second in the league and made the conference tournament championship game. Led by Jack Leasure, the Big South Player of the Year, it marked the program’s first 20-win campaign since 1992-93.