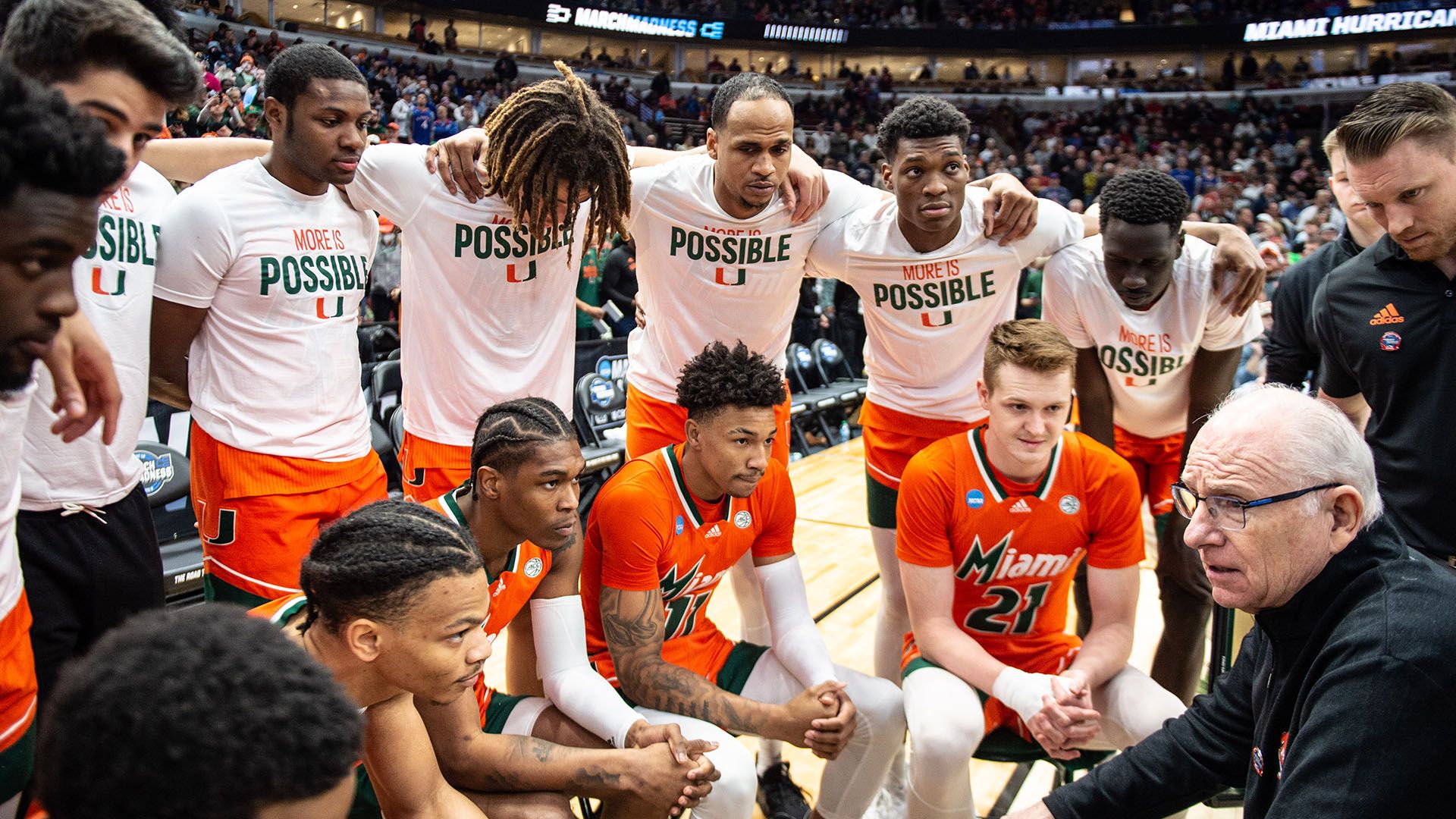 CHICAGO – One of the greatest seasons in the history of University of Miami men’s basketball came to an end Sunday afternoon at the United Center.

In its first Elite Eight appearance, No. 10-seeded Miami (26-11, 14-6 ACC) held a six-point halftime lead on top-seeded Kansas, but the third-ranked Jayhawks controlled the second session to earn a 76-50 victory in front of 20,241 fans.

Sixth-year redshirt senior guard Kameron McGusty scored a co-game-high 18 points for the Hurricanes in the final outing of his illustrious collegiate career.

“This was a fun season with a lot of guys pulling together and enjoying playing with each other,” Miami head coach Jim Larrañaga said. “They developed a style of play, both offensively and defensively, that may become the standard for all of our future teams.”

Neither team led by more than three points through the opening 16-plus minutes until sixth-year redshirt senior forward Sam Waardenburg went on a personal 5-0 run to put Miami up, 31-27, with 3:16 on the first-half clock. After a bucket by Kansas (32-6, 14-4 B12), the Hurricanes scored the next four points, making it a 9-2 surge to end the half.

In total, Kansas scored 28 of the first 37 points after halftime to take control of the game. The Jayhawks built their advantage as high as 26, the closing margin, in a stellar second-half showing on their way to the 16th Final Four berth in program history.

Two Miami starters, Waardenburg and fourth-year junior guard Jordan Miller, fouled out in the second half. Waardenburg, who did so in a regulation game for the first time in his career, picked up his fifth foul with 8:11 left, while Miller’s fifth came with 2:40 left.

“I saw two teams battle like crazy in the first half. We had the upperhand for a majority of the half,” Larrañaga said. “But in the second half, we didn’t execute the way we had been. Kansas not only executed better, but way better. We couldn’t make a shot, didn’t make a three and that made it really challenging.”

Kansas senior guard Ochai Agbaji, a First Team All-American, matched McGusty with 18 points, shooting 8-of-12 from the floor and 2-of-2 beyond the arc. He added five rebounds, four assists and a game-best four steals.

The Hurricanes, picked No. 12 in the ACC preseason poll, finished with the third-most wins in program history. They made the fourth Sweet 16 trip and first Elite Eight bid ever by Miami.