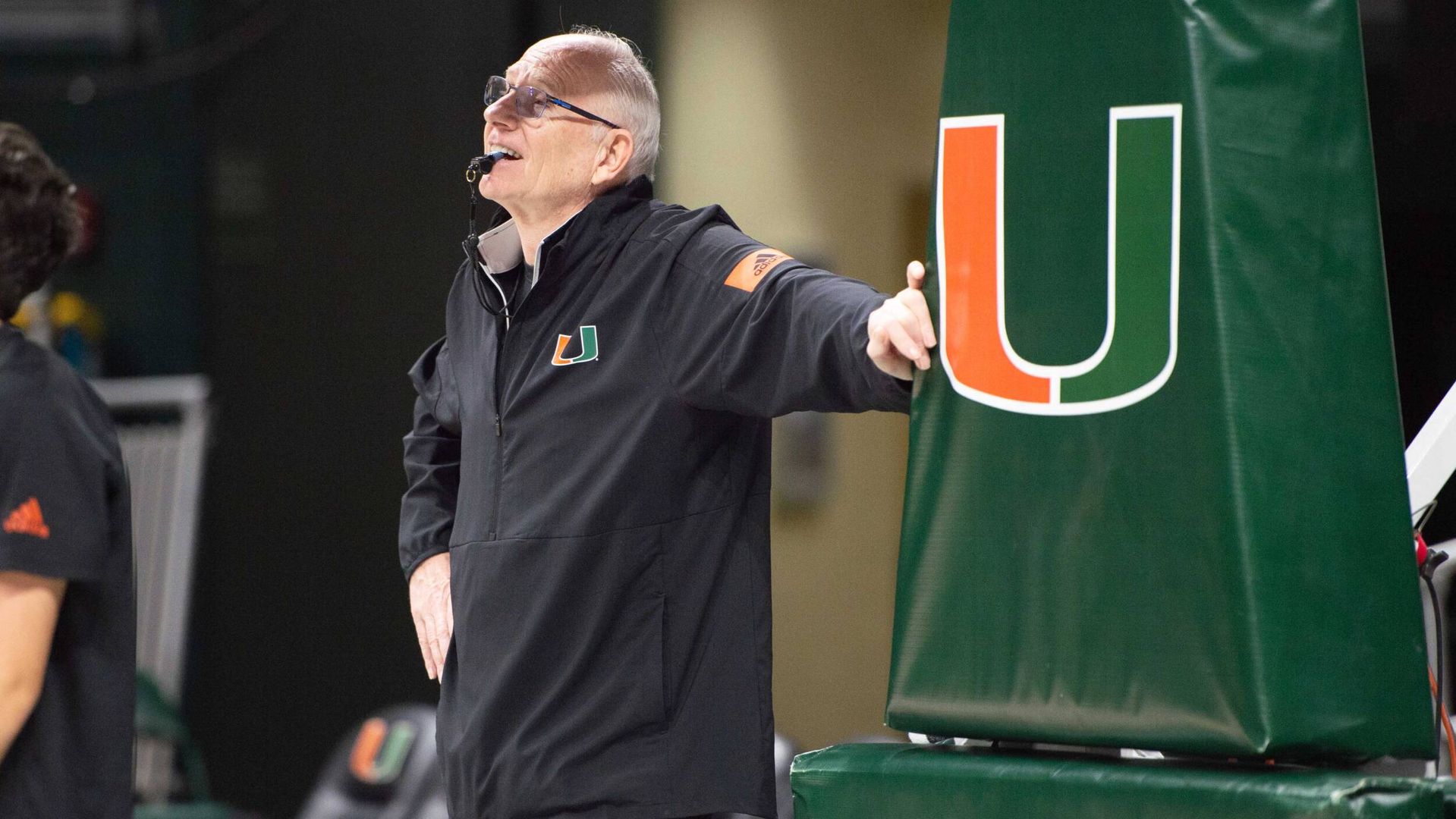 One Game at a Time

The Hurricanes went into historic Cameron Indoor Stadium and left with a 76-74 triumph over second-ranked Duke. It marked the third time Miami head coach Jim Larrañaga has won in Durham, N.C., the second-most of any coach during his 11-year stint at The U.

Despite facing a larger team filled with five-star recruits and future first-round picks, Miami (13-3, 5-0 ACC) flawlessly executed on both ends of the court to knock off the Blue Devils for the seventh time in 11 years. 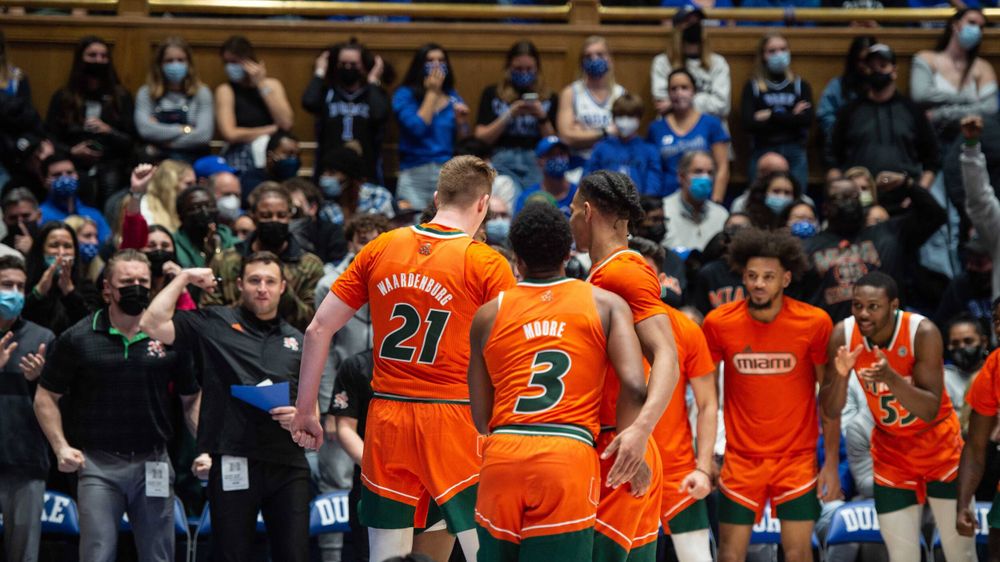 “Probably the two statistics that stood out to me the most are that we scored 52 points in the paint and only gave up two points off of turnovers,” Larrañaga shared. “So, we didn’t turn the ball over and we attacked the rim, which was our game plan.”

The Hurricanes’ 52 paint points shattered their prior season high of 42, set on Nov. 9, 2021, in the opener against Canisius. Despite a size disadvantage, the Hurricanes finished plus-14 in paint points.

Miami’s five turnovers also matched the program’s third-lowest total ever in ACC play. That, paired with tying the school record for steals in an ACC game with 15, led to a 17-2 edge in points off turnovers.

Much of the success, both in terms of taking care of the ball and in forcing turnovers, came by way of Charlie Moore. The sixth-year redshirt senior guard scored a team-high 18 points while committing just one giveaway and logging seven steals.

Moore’s seven steals set the program record in ACC play, tied for the second-most by a Hurricane in any game and matched the second-highest total ever by a visiting player in Cameron Indoor Stadium’s 82-year history.

“Charlie is our Tom Brady. He’s got so much responsibility on his shoulders,” Larrañaga said. “He’s got to deliver the ball, whether he scores it or passes it or just orchestrates our offense. He is our quarterback and he’s doing a terrific job at both ends of the court. I’m really impressed with his play.” 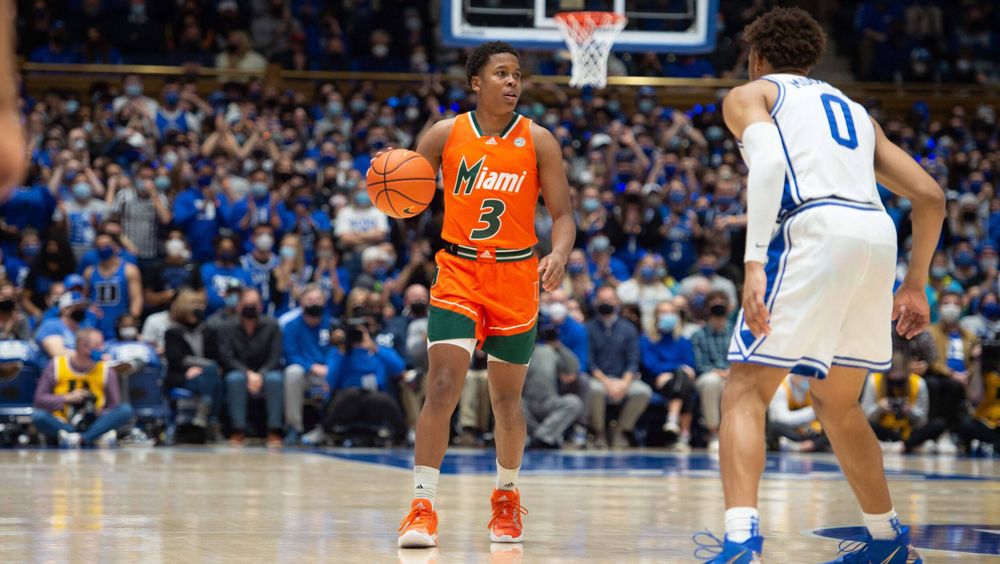 Picked No. 12 in the ACC preseason poll, Miami is off to its finest start in conference play since 2012-13. The Hurricanes have won nine games in a row, the fifth-longest active streak in the nation, with six of them against Power Five teams and five in league competition.

The victory over Duke—a result that included 17 points from fourth-year junior guard Jordan Miller, 15 from third-year sophomore guard Isaiah Wong and 14 from sixth-year redshirt senior guard Kameron McGusty—is assuredly the highlight thus far. One could argue it is actually the single best win by any team in the nation this season, as no other program owns a top-two road win.

Miami’s esteemed head coach, however, knows the road does not get any easier, even with the league’s preseason favorite now in the rearview mirror.

“Certainly, beating the number-two-ranked team in the country is a terrific accomplishment by this year’s team, but we have to constantly remind ourselves that the ACC is a marathon and not a sprint,” Larrañaga said. “It’s about 20 games and not just one. Every team we play in the league is very capable of beating us. We have to prepare one game at a time.”

A colossal victory over an iconic program can certainly aid a team from a mentality standpoint, but it does have the capacity to go in the opposite direction.

Larrañaga is aware of just that.

“The danger is there being a let-up. It’s not that your confidence doesn’t grow—it grows with every victory—but you’ve got to be very, very careful you don’t dwell on the past,” the two-time ACC Coach of the Year explained. “That game is over. We’ve got to get ready for Florida State. [The Seminoles have] four guys over 7-feet. We’re not a big team; they’re gigantic. So, we’ve got to prepare for them. Duke is over.”

Indeed, Miami’s next game is against its in-state, conference foe. The Hurricanes square off with the Seminoles Tuesday at 8 p.m. at the Donald L. Tucker Civic Center in Tallahassee, Fla. 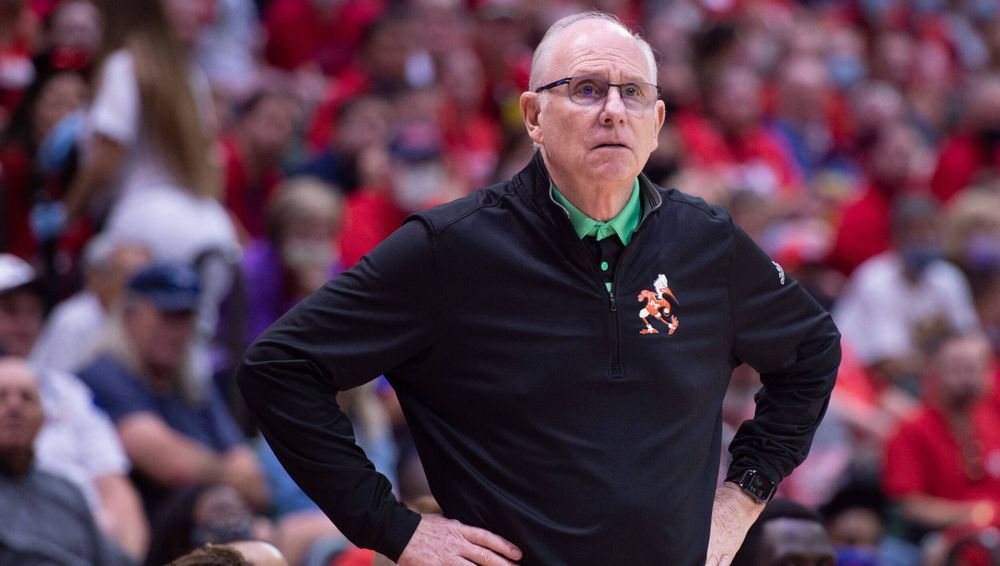 “They’re long and athletic,” Larrañaga said. “They’re fast, they protect the rim. They’re an outstanding Leonard Hamilton-type team and we’ve got to do a great job of preparing for them.”

Hamilton, of course, served as Miami’s head coach from 1990-2000, compiling a 144-147 record and leading the program to three consecutive NCAA Tournament berths. Larrañaga, who sports a 213-133 ledger at The U, is the only other coach to guide Miami to March Madness in three straight years.

The two coaches have a combined 41 years of experience in the Miami-Florida State rivalry, which the Seminoles hold a 51-36 all-time lead in. There is no program in the country the Hurricanes have faced more often than Florida State.

In the most recent meeting, the Seminoles earned an 88-71 road decision on Feb. 24, 2021, against a Miami team with just six available scholarship players.

“Well, it’s always been a great rivalry because we compete with Florida State for everything,” Larrañaga said. “Not just in football and basketball, but for students, for notoriety around the state, for everything.”

Redshirt sophomore guard Caleb Mills is the leading scorer for this Florida State team, averaging 13.2 points per game. He also co-leads the Seminoles, who handed Louisville its first ACC loss Saturday night, with 1.8 steals per outing.

Meanwhile, for Miami, Larrañaga is not focused on one player in particular who needs to step up in Tuesday’s contest. Rather, he is looking for his group to continue playing the way it has during its five-week winning streak.

“I think everybody has a key role,” he said. “The way a team functions is that everybody executes their role to the best of their ability, no matter if you’re a starter and leading scorer or a guy who comes in off the bench and plays six or eight minutes. Those are all important roles and all important minutes that you play. Wooga Poplar was sensational in 11 minutes yesterday [at Duke and] we could not have won the game without him.” 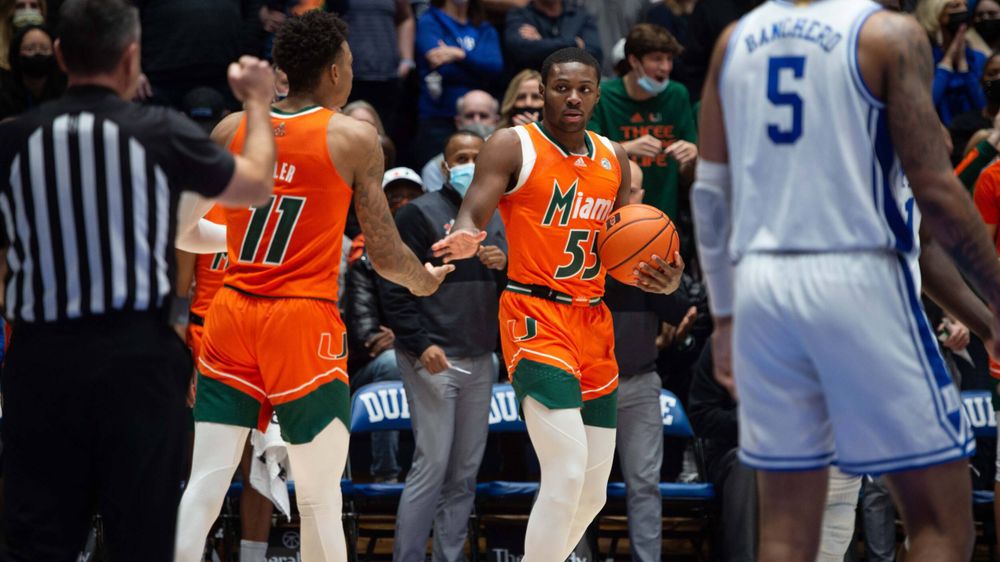 Miami, set for its first Saturday-Tuesday turnaround of the ACC slate, also needs to get physically prepared for this matchup.

“We need time to recover,” Larrañaga said. “We didn’t get back to [campus in] Miami until nearly 3 o’clock in the morning. So, the expression we use, ‘sharpen your saw,’ becomes vitally important right now.

The Hurricanes’ matchup with the Seminoles will be televised live on ACC Network HERE, with Dave O’Brien and Cory Alexander on the call. Joe Zagacki will have the radio broadcast on AM 560 Sports WQAM HERE. In addition, live stats for the game can be found HERE.

Following its outing in Tallahassee, Miami has a weekend bye and then hosts North Carolina Jan. 18 at 7 p.m., live on ACC Network from the Watsco Center in Coral Gables, Fla.