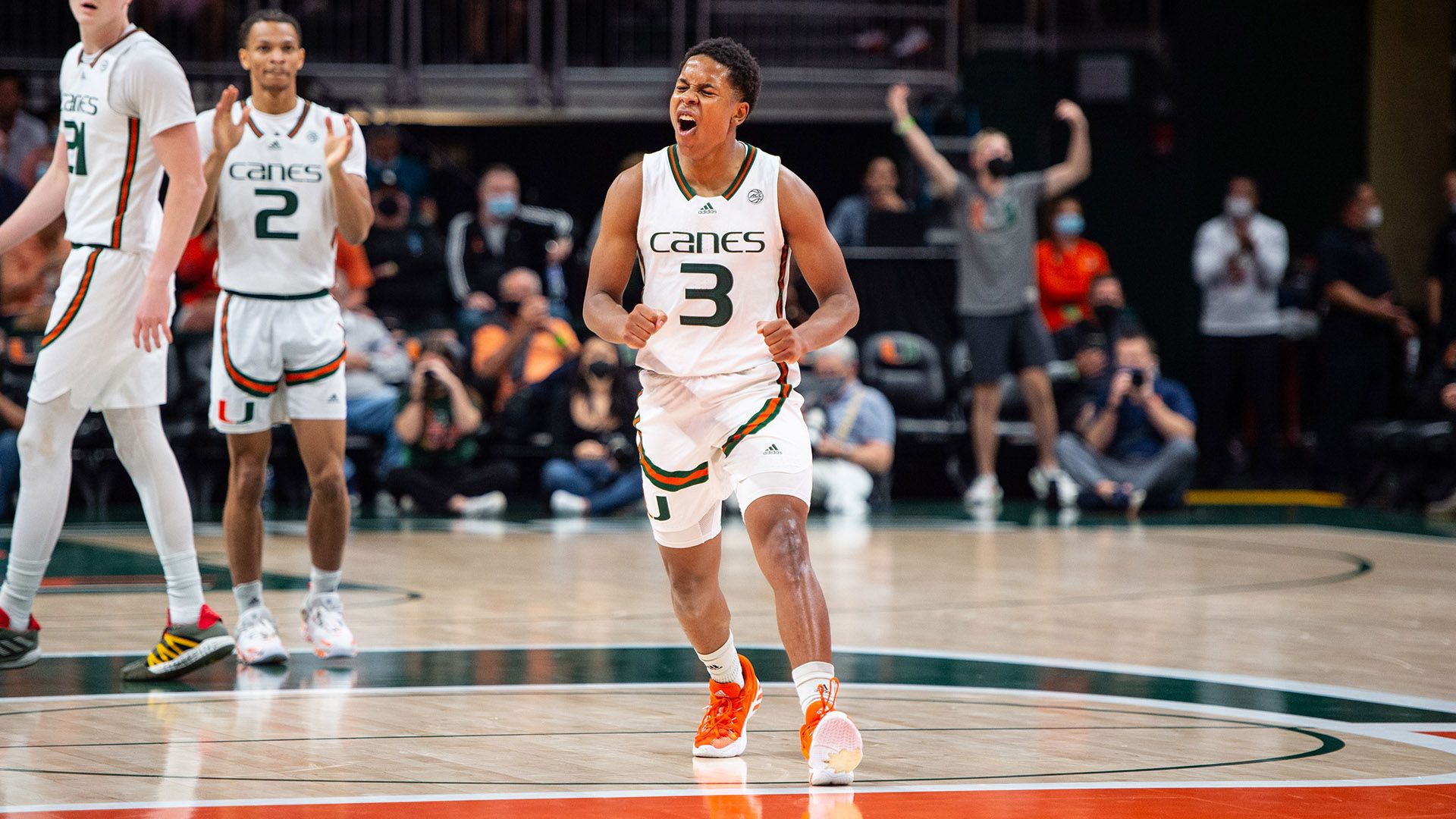 CORAL GABLES, Fla. – Trailing Syracuse by 18 with under 21 minutes left and by 14 at the break, the University of Miami men’s basketball team stormed back to defeat Syracuse, 88-87, Wednesday night at the Watsco Center.

“I thought Syracuse played a tremendous first half. I thought they executed their game plan extremely well and we were kind of caught a little passive against their zone,” Miami head coach Jim Larrañaga said. “We were standing around; we weren’t moving the ball very well. It ended up with bad shot selection and they blocked [a lot] of our shots. As the half was closing, we found a little better way to move the ball. So, at halftime, we stuck with that game plan for offense.

“But the key to the game was our defense,” Larrañaga continued. “We started pressing them and pressuring them, and the game got to be very, very fast. We were able to take advantage of some of their miscues, missed shots and turnovers. We scored in the open court before they could get their defense set.”

The Orange, who shot 9-of-15 beyond the arc in the half, upped its lead as high as 18, but the Hurricanes scored the final four points before the break and trailed by 14, 44-30, entering the intermission.

Moore led Miami with 13 points and five boards in the first half. At the other end, Syracuse junior center Jesse Edwards logged 14 points on 7-of-9 shooting, adding six rebounds and five blocks, the latter already the top single-game total by a Miami foe all season.

The Orange retook the lead soon thereafter, but Miami scored nine straight points to go up by eight, 63-55, with 9:51 remaining. Following back-and-forth basketball, Syracuse senior guard Buddy Boeheim scored six points—sandwiched around a Miami basket—in 51 seconds to cut the home team’s lead to two, 69-67, with 4:50 on the clock.

Miami countered with a 7-2 run, capped with a three-point play by sixth-year redshirt senior guard Kameron McGusty, to take a seven-point lead, 76-69, with 2:24 to go.

The Orange hit four 3-pointers in the final 1:18, including three by senior forward Cole Swider, but the Hurricanes never lost the lead. Moore hit a 3-pointer of his own with 61 ticks left to counter Swider’s first long-range make, then Miami went 6-of-8 from the line and got a fast-break dunk from fourth-year junior guard Jordan Miller during the last 46 seconds. Swider’s buzzer-beating 3-pointer moved the final margin from four to one.

Moore turned in arguably his finest game as a Hurricane, shooting 8-of-14 from the floor, 6-of-10 from deep and 3-of-4 at the line. The eight made field goals set a season best, while the six made 3-pointers matched his career high. The Chicago native added five rebounds and a co-game-high six assists, while committing just one turnover in nearly 37 minutes of action.

“Well, I thought Charlie Moore was sensational from start to finish. He just needed a helping hand; he got it from Kam McGusty and Isaiah Wong in the second half, and from Jordan Miller,” Larrañaga said. “One of the keys is we had Sam Waardenburg back; Sam had been out [because of] COVID protocols. Him coming back, handling the ball, sharing it and screening and playing good defense was one of the major keys.”

McGusty scored 19 points, including 12 on 5-of-8 shooting in the second half, while adding five rebounds, a season-high-tying five assists and a season-high-tying three steals. Wong, meanwhile, posted all 14 of his points in the final 11 minutes and shot 8-of-9 from the stripe.

Miller added 11 points, a team-high eight rebounds and a career-best six steals, the most by a Hurricane since Jan. 2, 2016. Waardenburg, who hit the first 3-pointer of the second half, chipped in seven points and five rebounds.

Syracuse junior guard Joseph Girard III led all scorers with 26 points, shooting 8-of-15 from the floor, 7-of-12 beyond the arc and 3-of-4 at the line. Edwards totaled a career-high 22 points on a 10-of-13 clip, adding a game-high nine rebounds and a career-best seven blocks.

Swider scored 20 points on 6-of-9 shooting from long range, giving the Orange a trio of 20-point scorers, marking the first time a Miami opponent has achieved that feat since February 1989. No other player reached double figures, as Miami held senior guard Buddy Boeheim, a top-five scorer in the league, to nine points on 2-of-7 shooting before he fouled out.

The second-half performance helped the Hurricanes counteract blistering long-range shooting from the Orange, who went 17-of-32 (53.1 percent) in that category. Their 17 makes set a school record and marked the second-most ever by a Miami foe in ACC play.

The Hurricanes also notched 14 steals, tied for their second-most ever in ACC play, to earn a 25-11 edge in points off turnovers and an 18-3 advantage in fast-break points.

MIAMI HURRICANES POSTGAME NOTES
– The Hurricanes moved to 10-20 all-time against Syracuse, including 6-10 at home and 5-6 in Larrañaga’s tenure.
– Miami scored 19 more points Wednesday than it has in any of its prior 10 matchups against Syracuse since the latter joined the ACC, as well as 22 more points than it has in any such regulation game.
– Larrañaga, who entered the game with the ninth-most victories of any active Division I coach, is now 682-467 in 38 years as a head coach, including 212-133 in 11 seasons at Miami.
– Now owning 106 ACC wins (regular season or tournament) as a head coach, Larrañaga moved past Bud Millikan for sole possession of the No. 14 spot on the all-time list.
– For the third time this season, Miami used a starting lineup of McGusty, J. Miller, Moore, Wong and fifth-year redshirt junior forward Deng Gak.
– Waardenburg, who came off the bench for the first time this season, returned to action after missing the last two games due to COVID protocols.
– The Hurricanes are currently one of two teams in the ACC with a 4-0 league record and sit, alongside Louisville, atop the conference standings.
– Miami is 4-0 in ACC play for the second time ever and first since 2012-13, when it started league play 13-0.
– The Hurricanes are riding an eight-game winning streak for the first time since 11/10/17 to 12/22/17 when they started the 2017-18 season with a 10-0 record.
– Miami is the first team to score 88-plus points in three consecutive regular season ACC games in nearly four years, dating back to when Florida State did so on 1/20/18, 1/24/18 and 1/27/18.
– The Hurricanes are now 5-3 on the season when trailing at halftime, notching four such victories in a row.
– This is the second year in a row Miami has won a game it trailed by 18-plus, as it rallied back from a 20-point deficit to beat Purdue by four on 12/8/20.
– From the 0:27 mark of the first half to the 9:51 mark of the second half, the Hurricanes outscored Syracuse by 26 points, 37-11.
– Miami’s 14 steals tied for its second-most all-time in ACC play, matching its total exactly one year ago on 1/5/21 against North Carolina.
– The Hurricanes’ prior season high in steals was 11, recorded twice, on both 12/8/21 versus Lipscomb and 11/13/21 against UCF.
– Before J. Miller’s six-steal performance tonight, the top mark by a Miami player in 2021-22 was five, also by J. Miller on 12/8/21 against Lipscomb.
– J. Miller is the first Hurricane with six steals in a game in over six years, dating back to 1/2/16 when Angel Rodriguez had six, also versus the Orange.
– The six steals for Miller tied for the most by a Hurricane in ACC play, matching Shane Larkin (1/10/12 at North Carolina) and Rodriguez, and tied for the third-most by a Miami player in any game all-time.
– Syracuse is the 13th Division I team in the last 12 seasons to lose a game in which it made 17-plus 3-pointers on at least a 53.0 percent clip, including just the fifth such Power Five team.
– The last time an opposing team had three 20-point scorers against the Hurricanes was over 30 years ago when Texas did so on 2/22/89.
– Girard’s seven made 3-pointers are the most by a Miami opponent since Georgia Tech’s Michael Devoe posted the same number on 2/20/21.
– The only team to ever make more than 17 3-pointers in a game against the Hurricanes in ACC play was Boston College last season, when the Eagles went 18-of-35 on 1/12/21.
– Edwards is the first Miami opponent to post seven blocks in a game since Minnesota’s Reggie Lynch did so on 11/29/17.
– Moore, who eclipsed 1,400 points in his career, recorded his 22nd 20-point showing, including his second this year.
– Moore, whose prior game with six made 3-pointers came on 12/18/18 against South Dakota State while he was at Kansas, scored double-digit points for the 65th time, including the eighth this season.
– In addition, Moore notched his 41st five-assist performance, including his fourth in 2021-22.
– Moore is eighth player this season to record 25 points, six assists, five rebounds in a game against a Division I foe without committing multiple turnovers, including the first to do so with six made 3-pointers.
– Waardenburg surpassed 400 rebounds at Miami.
– McGusty, who eclipsed 100 steals as a collegian, tallied double-figure points for the 77th time, including the 49th as a Hurricane and 14th this year.
– McGusty logged his fifth five-assist outing, all as a Hurricane, including his second of the season.
– Wong registered double-digit points for the 47th time, including the 14th in 2021-22.
– J. Miller, who set a new top mark in rebounds in ACC play, scored in double figures for the 55th time, including the fifth this season and third in a row.