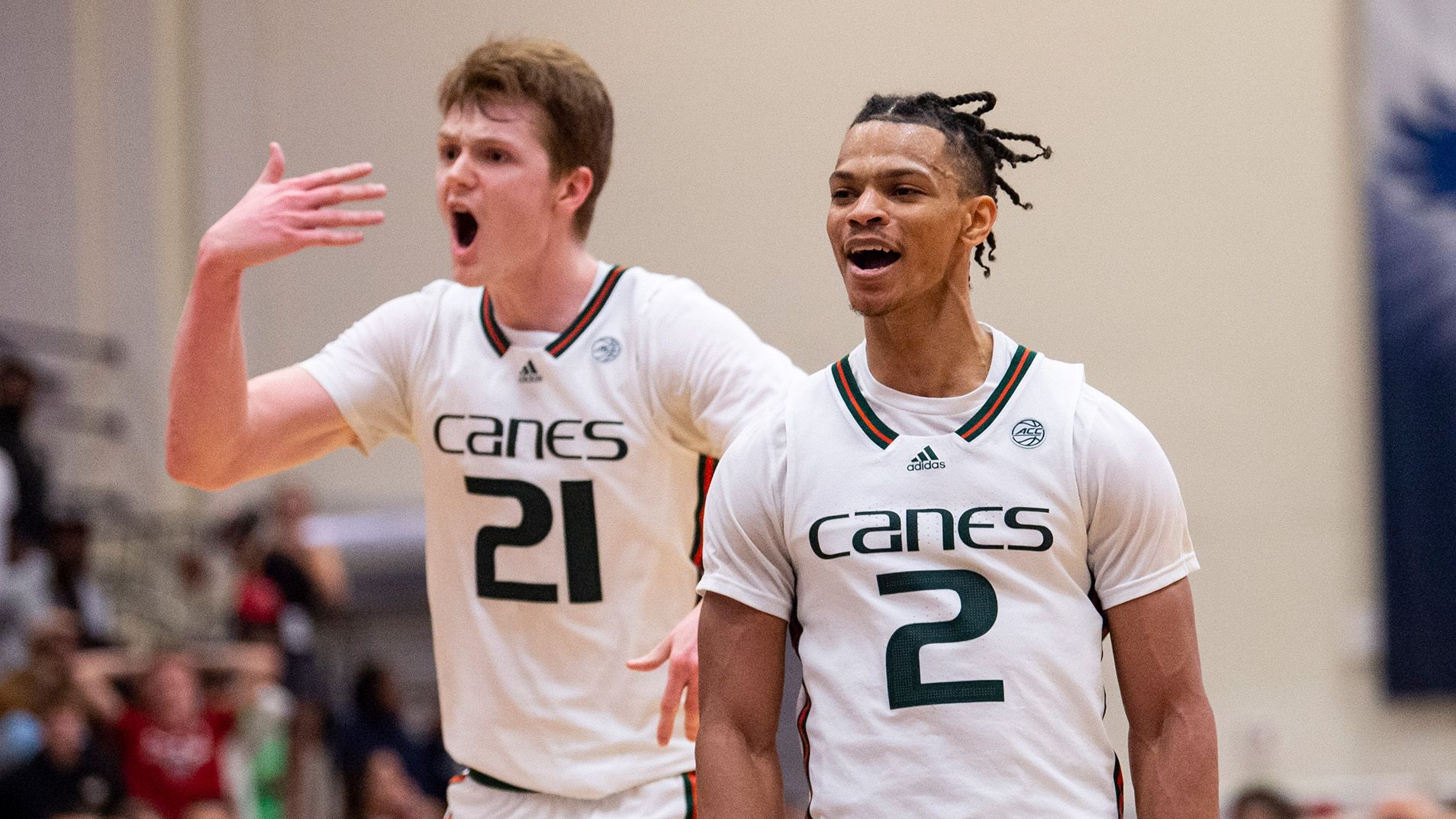 Miami (2-1) led for over 39-and-a-half minutes and never trailed in the contest, but needed Wong’s late bucket to earn the win in front of a packed house at Abessinio Court at FAU Arena. Wong, a third-year sophomore guard, paced the Hurricanes with 18 points in their first road matchup with the Owls since Dec. 3, 2002.

“I thought their players did an outstanding job of [using straight-line drives and] … in the second half, that we were not able to stop it and we ended up fouling them,” Miami head coach Jim Larrañaga said. “Then, they made their free throws and cut into our lead kind of steadily, not all at one time. So, we were still able to stay in front. I know the score was tied at the end, but I think we led nearly from start to finish.”

The Hurricanes jumped on Florida Atlantic (1-2) right from the tip, grabbing a 15-3 lead in the first six-and-a-half minutes. They also forced eight turnovers in the opening seven minutes and held the Owls to just three field-goal attempts in that time.

After sixth-year redshirt senior guard Charlie Moore started the second half with a jump-shot to again put Miami up by 16, Florida Atlantic scored nine straight points to begin a 13-3 run that trimmed its deficit to six, 39-30, with 15:40 to play.

Miami scored three straight points to go up by five with 26 ticks left, but Florida Atlantic, at the other end, finished a layup through a foul, missed the shot, grabbed the rebound and drilled a game-tying 3-pointer with 16 seconds remaining.

Wong, though, made a heroic drive to the rim for Miami, putting a shot off the glass and in with 0.7 showing on the scoreboard, sending the Hurricanes—who then got a defensive stop after a timeout—into jubilation.

“Well, we had a timeout; we chose not to use it,” Larrañaga said. “What we wanted to do was just clear everybody out of Isaiah’s way and let him take his man, expecting that he would either score or get fouled. He was able to juke and jive his way to the basket and make an acrobatic layup, which he’s very good at.”

Sixth-year redshirt senior guard Kameron McGusty, who led the Hurricanes with eight rebounds, scored 14 points and went 12-of-14 from the line, marking the second game in a row he reached a dozen-plus in both categories. The Katy, Texas, native took nine of his free throws in the first half, connecting on his initial eight.

Freshman guard Wooga Poplar, who went scoreless in four minutes of action in Miami’s first two games, totaled 12 points in the win, finishing 4-of-5 from the floor, 3-of-3 at the stripe and making his lone 3-pointer.

Junior guard Michael Forrest, who made the game-tying 3-pointer, led all scorers with 21 points, 16 of which came in the second half. Freshman guard Alijah Martin tallied 15 of his 17 points after the intermission to join Forrest in double figures, while freshman center Vladislav Goldin grabbed a game-best 11 rebounds before fouling out.

MIAMI HURRICANES POSTGAME NOTES
– The Hurricanes, with a 10th straight victory in the series, improved to 25-1 all-time against Florida Atlantic, including 6-1 on the road and 5-0 in Larrañaga’s tenure.
– Miami’s 25 wins against the Owls are now solely its eighth-most versus any program all-time—breaking a tie with its totals against Florida, Pittsburgh and Virginia Tech—including fifth-most versus current Division I programs.
– Larrañaga, who entered the game with the ninth-most victories of any active Division I coach, is now 672-465 in 38 years as a head coach, including 202-131 in 11 seasons at Miami.
– For the first time this season, Miami used a starting lineup of McGusty, Moore, Wong, sixth-year redshirt senior center Rodney Miller Jr. and sixth-year redshirt senior forward Sam Waardenburg.
– For Miller Jr., the start was his first since 3/7/20 against Syracuse in the 2019-20 regular season finale, 619 days ago.
– Miami is now 85-9 since the program rebirth (1985-86) against non-Power Five, in-state foes, including 18-4 in true road games, 17-4 under Larrañaga and 4-1 on the road in his tenure.
– Zach Johnson’s jump-shot to beat Clemson with 0.4 to go on 2/13/19 was the last time Miami won a game in the final second.
– The last time the Hurricanes played a non-conference true road game was 12/2/19 when they won at Illinois in the Big Ten/ACC Challenge.
– For the second consecutive game, two Miami opponents fouled out, as Goldin and graduate student forward Batumba Baruti both did so.
– Over its last two games, Miami is 61-of-77 (79.2 percent) from the free-throw line, following a 31-of-39 showing Saturday against UCF.
– After reaching 30 made free throws in a game three times in Larrañaga’s his first 10 seasons, Miami has now done so back-to-back in the second and third outings of his 11th season.
– Similarly, after notching 38-plus free-throw attempts in a game twice in Larrañaga’s first 10 years, the Hurricanes have now done so in consecutive games within the first three affairs of his 11th campaign.
– After posting career bests of eight made free throws and 10 attempts through his first 112 outings, McGusty has surpassed both of those marks in each of the last two games, as he went 14-of-17 versus UCF.
– McGusty notched double-digit points for the 66th time, including the 38th as a Hurricane and third in as many games this year.
– Wong, who moved past 250 made field goals as a Hurricane, scored in double figures for the 35th time, including the second this season.
– Poplar scored the first points of his career on a driving layup with 11:30 on the first-half clock and then added a 3-pointer just 48 seconds later.
– J. Miller eclipsed 2,250 minutes played as a collegian.