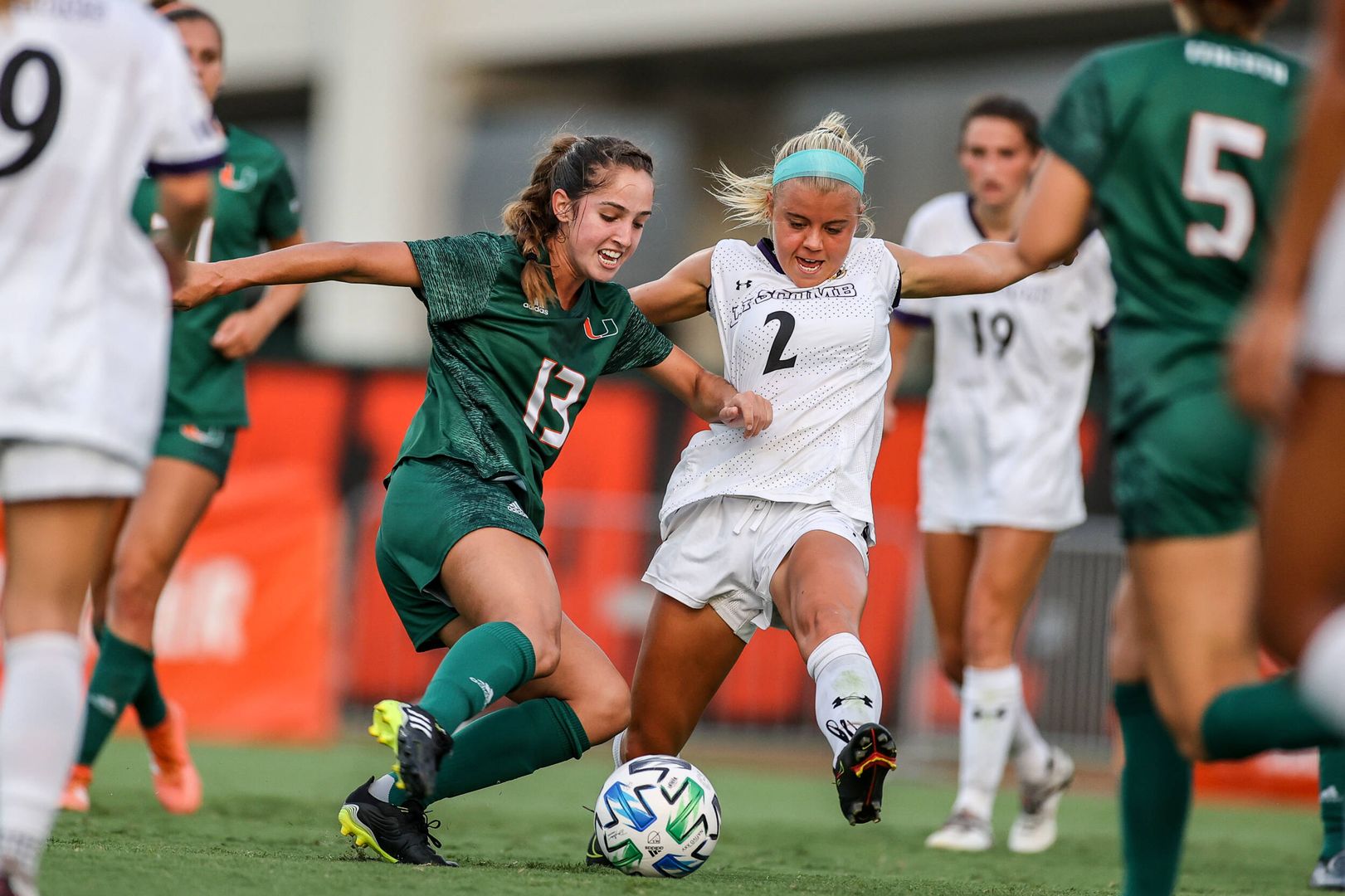 For Mia Atrio and Katerina Molina, orange and green have always been in their blood.

Atrio’s father, Andy, played wide receiver for the Hurricanes in the mid-90s. Meanwhile, Molina is a third-generation Cane with her grandfather and parents having attended the University of Miami.

Miami’s dynamic duo met in pre-school, played alongside each other into high school and reunited on the pitch at The U.

“Our soccer teams were rivals in pre-K but then when we got to travel soccer, we became teammates and inseparable,” Molina said. “All through middle school and high school we were always together.”

“It’s like a sisterly bond,” Atrio said. “We can read each other’s minds on the field.  We know the next pass we’re going to make before it’s made.”

When the Canes welcome crosstown foe FIU to Cobb Stadium Thursday evening, the pair will have extra motivation to protect their home turf.

Both Atrio and Molina are friends with a handful of players on the Panthers, including Sophia Vilar, the younger sister of former Hurricanes baseball standout Anthony Vilar.

“It’s always nice to see a friendly face on the field,” Atrio said. “But when game time comes, we’re fighting to win. We’re doing anything we can to win and have to put our game faces on.”

Miami and FIU have met 15 times, last squaring off this past March. In the spring showdown, the Hurricanes downed the Panthers, 4-0, extending their win streak to three in the series. UM has won six of its last seven contests, and 10 of 15 overall, against FIU.

After starring together growing up, the pair has started to carve out roles at the collegiate level.

Atrio, who capped her high school career with 111 goals and back-to-back state championships, played in 12 matches and earned five starts in her rookie campaign at UM, logging 437 minutes, including a career-high 80 minutes against Pittsburgh. This fall, the 5-foot-3 forward is working her way back from an offseason.

“On the field, she’s relentless,” Molina said. “She’s quick. Our chemistry is incredible. I always know where she’s going before she makes that move.”

For two years in high school, Molina started alongside Atrio, helping the Cougars secure their first-ever state championship. After her sophomore year, Molina focused her attention on her academics and her club team, Weston FC DA.

Since arriving on campus, the 5-foot-7 midfielder/forward has tallied five points, including the game-winning goal against FAU on Aug. 22. Molina has started all four matches to begin her sophomore season after appearing in 12 matches and making five starts a year ago.

“She’s really tough,” Atrio said. “She’s super skilled and always shines with the ball at her feet. I love playing with her.”

Atrio and Molina have shared nearly every step of their soccer journey together.

Their next step, gearing up for a backyard battle against FIU at 7 p.m. Thursday.

“We need to be composed and relentless when we face them, “Molina said. “We want to come in attack-minded and be ready to play.”