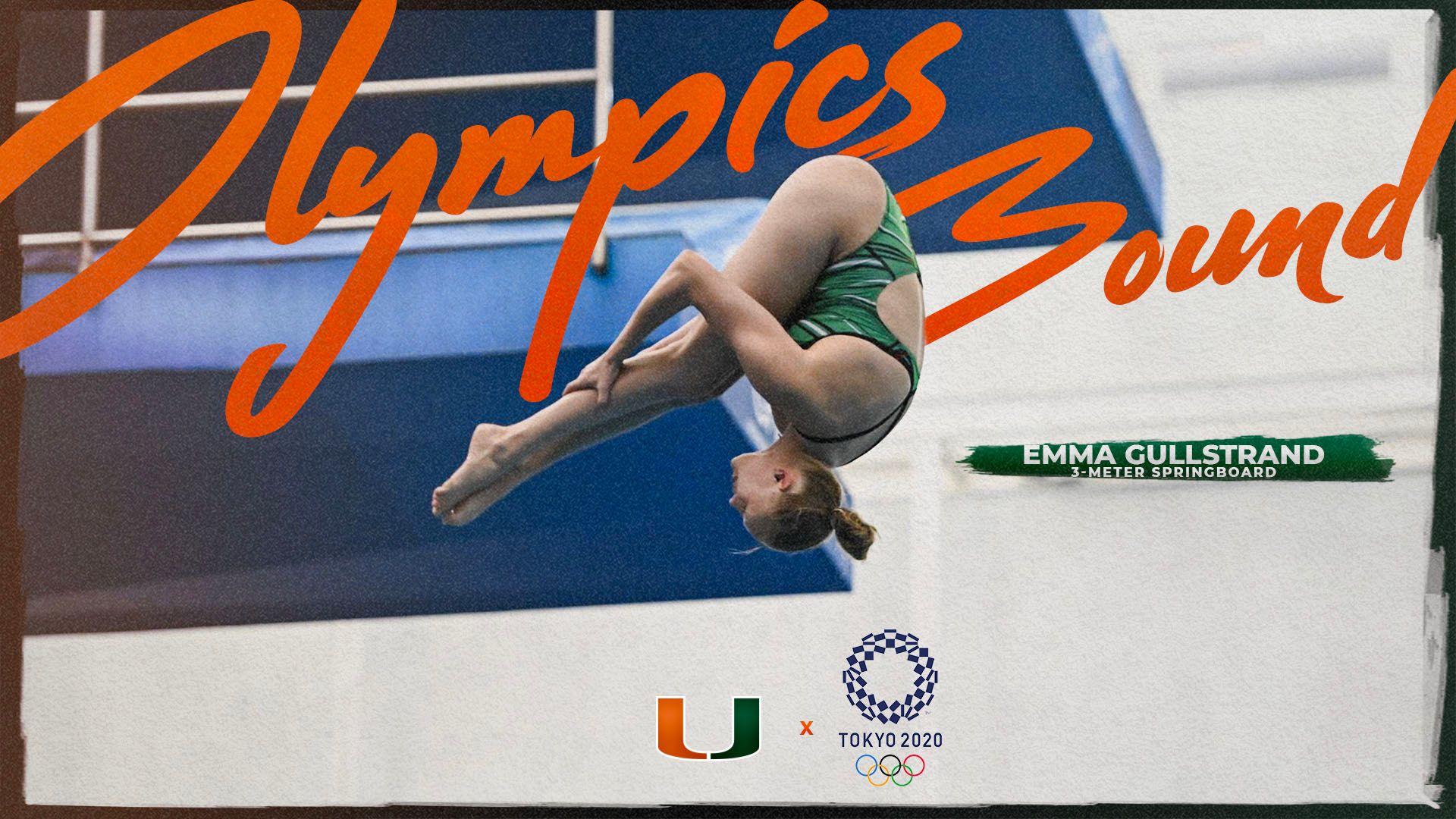 Gullstrand to Represent Sweden in Tokyo

Freshman diver Emma Gullstrand officially qualified for the 2021 Tokyo Olympics, where she will represent her native Sweden after earning a roster spot for the 3-meter springboard diving event.

Gullstrand said she found out about her selection Monday, but was sworn to secrecy until the official announcement came Wednesday morning.

“Our head coach Ulrika Knape texted me Sunday night and said, ‘Can I call you around 9 a.m. or 10 a.m. tomorrow?” Gullstrand said. “I said, ‘No, I don’t want to go through morning practice not knowing! Can you call me at 7 a.m. instead?’”

Knape agreed, and it was then that Gullstrand found out the news.

After a stellar showing at the 2021 European Championships in Budapest, where she finished third on the 3-meter springboard, Gullstrand became the 13th Hurricane to qualify for the Olympics under the tutelage of head diving coach Randy Ableman.

“I had to keep it from everyone until today. My team kind of already knew, based on how I was acting on Monday at practice,” Gullstrand said with a laugh. “They’ve been so supportive. They’ve been going through the whole phase of emotions with me since the FINA World Cup. It’s been such a fun time.”

Gullstrand helped Sweden clinch a spot for the Olympics by finishing 17th on the 3-meter at the FINA World Cup in Tokyo earlier in spring. From Tokyo she flew straight to Budapest for the European Championships, hoping she had done enough to earn her place at the Olympics and a return trip to Tokyo.

Gullstrand, who arrived to Coral Gables as mid-year enrollee, said earning a spot at the 2021 NCAA Swimming & Diving Championships and her subsequent All-America recognition played a big role in her successful qualifying run.

“It was so exciting. When I went to World Cup and Europeans after the college season ended, I had the advantage of having the competitions I had at NCAAs,” Gullstrand said. “It’s been amazing. I got to a new environment with an amazing team and it’s just been wonderful… it’s the only word I can think of.”

Though the transition from Tokyo to Budapest was a difficult one, Gullstrand was focused on the task at hand.

“To go directly into another time zone and try to not get too jetlagged and have a good competition… it was interesting,” Gullstrand said. “But it was so much fun. I did 1-meter springboard a couple days before the 3-meter just to get into the rhythm of competition, and 1-meter didn’t go so well.

“But I came back and did really well on the 3-meter.”

Gullstrand said she is proud to continue a lineage of Hurricanes representing on the sport’s biggest stage; Sam Dorman won a medal for the United States at the 2016 Rio Olympics, while Brittany Viola competed for Team USA at the 2012 London Olympics.

“I’m super excited. I really don’t think it’s hit me that I’m going yet, even though I’ve known it since Monday,” she said. “It feels so amazing. I have the support of my team here, and hopefully they’ll be watching. It’s just amazing to have this kind of support.”