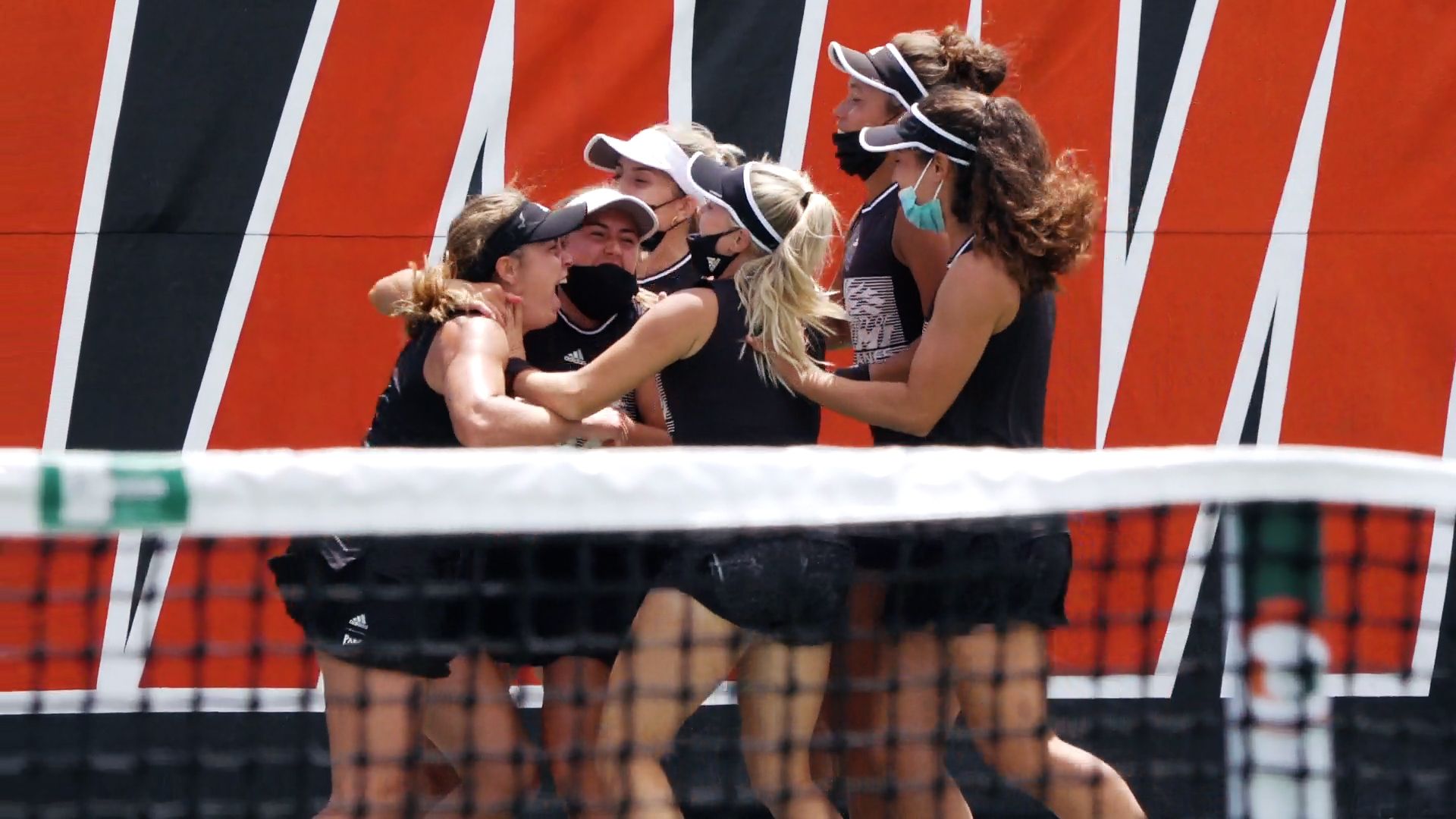 No. 26 Miami (11-6, 8-4 ACC) dropped the doubles point against the Cavaliers, but won four singles matches, including two in decisive third sets, to log its first top-10 victory of the season.

“We needed this,” Miami head coach Paige Yaroshuk-Tews said. “We’ve been patiently just sticking with the process, staying positive with these girls and really pointing out all the positives. Even through a lot of tight losses, there have been a lot of positives. So, we’ve been trying to grab onto those. It was just nice to see them come out today [and do this], especially the ones that got the wins today.”

The Virginia (12-4, 8-3 ACC) duo of Vivian Glozman and Amber O’Dell, ranked No. 52, clinched the point by defeating third-year sophomore Daevenia Achong and second-year freshman Florencia Urrutia, 6-3. The Cavaliers won deuce points at 3-3 and 4-3 on their way to victory.

A top-30 matchup between Miami fifth-year senior Estela Perez-Somarriba and freshman Isabella Pfennig, ranked No. 19, and Virginia’s Sofia Munera and Natasha Subhash, ranked No. 29, was left unfinished with the Hurricanes ahead, 5-3.

“I sensed calmness before the match, which kind of bothered me in doubles because I almost felt like we were too calm, but I didn’t see nerves. So, I hit them pretty hard after doubles,” Yaroshuk-Tews shared. “I told them if they go out there and they don’t play with more fire, I felt like we were going to struggle to pull out a ‘W.’ But the good news is that they were calm and I hadn’t seen that in the last few big matches that we’ve played. So, I was happy to see that. I was happy to see the poise and the disciplined tennis in the big moments.”

Miami took the first two singles matches to pull in front, 2-1, behind impressive displays in the bottom third of the lineup.

The Cavaliers evened the score at 2-2 behind a 7-5, 6-3 victory from No. 101 Johanson, who rallied from a 0-3 second-set deficit to defeat Achong in straight sets.

No. 35 Subhash snapped No. 17 Pfennig’s seven-match winning streak to put Virginia back in front. She took five straight games in the first set to close it out and then won the second in a tiebreaker to earn a 6-3, 7-6 (7-1) result.

Miami, facing a 3-2 deficit, needed both remaining matches, one on Court 1 and the other on Court 4.

Fourth-ranked Perez-Somarriba provided the tying point by rallying to defeat sixth-ranked Navarro, who entered the match with an unblemished 14-0 record in her young college career. After dropping eight of the first nine games, Perez-Somarriba won 12 of the final 17 to log a 1-6, 6-4, 6-3 victory. With the decision, the Madrid native improved to 14-5 in her career against top-10 foes.

“Stela never wants to lose; she definitely doesn’t want to lose when it’s 4-3. She felt her team,” Yaroshuk-Tews said. “I think she felt that we were going to pull two in the back [from Maya and Diana]. Daev was even hanging on tough there in the second set. I’ll be perfectly honest with you, I was never worried [about Estela]. I know that’s crazy to say, but I wasn’t worried. … I give a lot of credit to Navarro. What a player, what a class act, what a match.”

All eyes turned to Court 4, where Urrutia finished off a third-set comeback to defeat Hibah Shaikh and give Miami the win. Facing a 1-3 deficit in the final set, she won each of the last five games to post a 6-2, 4-6, 6-3 victory and send the Hurricanes into a jubilant celebration.

“It was nice to see Flor come through in a situation like that,” Yaroshuk-Tews said. “You’ve got to play with a mentality that big players play big tennis in the big moments. It’s not about playing well when you’re up 5-0 in a match. This wasn’t easy to do. I’m proud of them.”

With its seven-match homestand in the books, Miami now heads to Tallahassee, Fla., to play sixth-ranked Friday at 4 p.m. in its final ACC match of the season.