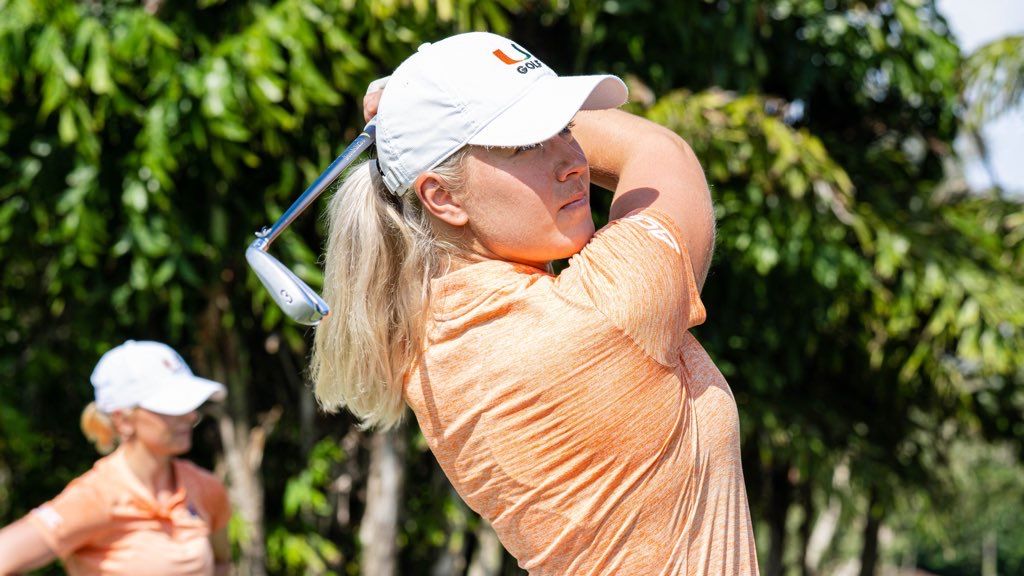 CORAL GABLES, Fla. – A quartet of University of Miami student-athletes are among the 52 recipients of the ACC’s 2021 Weaver-James-Corrigan Postgraduate Scholarship Award, as announced by the conference office Wednesday morning.

The Weaver-James-Corrigan and Jim and Pat Thacker postgraduate scholarships are awarded to selected student-athletes who intend to pursue a graduate degree following completion of their undergraduate requirements. Each recipient will receive $6,000 toward his or her graduate education. Those honored have performed with distinction in both the classroom and their respective sport, while demonstrating exemplary conduct in the community.

One of just three recipients of the Jim & Pat Thacker Scholarship award, Ajagbe is two-time ACC Field MVP, most recently defending her shot put title at the 2021 ACC Track and Field Indoor Championships. In April, the Miami native was named the 2020 ACC Indoor Track Scholar-Athlete of the Year, after earning both ACC Women’s Field Performer of the Year and ACC Championship Field MVP honors, after capturing gold in both the weight throw and shot put at the conference championships. Her gold medal toss in the weight throw set an ACC Championship and Miami program record mark of 22.55 meters. In the classroom, Ajagbe holds a 3.463 overall GPA, while majoring in mechanical engineering.

A native of Bergen, Norway, Grimstad has been a pillar to the Miami golf program over her illustrious five-year career. Competing in all 121 possible rounds as a Hurricane, she has maintained a 73.12 scoring average, while setting the program record during the 2019-20 campaign with a remarkable 71.00. Following her historic senior campaign, Grimstad was selected as a Second-Team All-American by the Women’s Golf Coaches Association (WGCA), becoming the 22nd player in program history to earn WGCA All-American honors, while also collecting All-American Honorable Mention team status through Golfweek. A recipient of the 2020 Dinah Shore Trophy, she cemented her status as one of the top collegiate female players who has made an impact on the golf course through her leadership and also on society through charitable endeavor. A two-time captain, she earned her bachelor degree in sport administration last spring, along with a minor in sport medicine. Boasting a 3.853 GPA as an undergraduate, she has been named to the All-ACC Academic Team every year and earned WGCA All-Academic honors in 2018 and 2019. Currently pursuing a master degree, Grimstad is maintaining a 4.0 GPA.

A two-time team captain, Knapp has set several top-10 marks in her signature freestyle events over the course of her career. The Germantown, Md., native posted the 10th-fastest time in program history in the 50-yard freestyle (23.11), the eighth-fastest time in the 200-yard freestyle (1:48.52) and the sixth-fastest time in the 100-yard freestyle (49.88). Knapp graduated in three years from Miami with a double major in both communication studies and international studies, to go along with a minor in Spanish, while boasting a remarkable 3.97 GPA. In addition to her work in the classroom and in the pool, Knapp served on the University of Miami’s Student-Athlete Advisory Committee’s executive board in 2020, as the group’s community service and outreach coordinator. Currently, she is pursuing a master of arts in international administration.

Lukianova is one of nine student-athletes who plan to pursue professional careers in their chosen sports and were named honorary recipients. In her four seasons with Miami, the Omsk, Russia, native has recorded 1,011 kills, with a team-high 304 in 2019. This spring, Lukianova broke into Miami’s top 10 record book for kills in a career, surpassing Elizabeth Tyson (2001-04) for ninth in program history. Lukianova has also been named to the All-ACC Second Team two years in a row and garnered back-to-back All-ACC preseason team recognition from 2019-2020. Lukianova boasted a 3.68 GPA during her undergraduate career and is currently working on her master’s degree in sports administration. The three-time Provost Honor Roll recipient has also been named to the AD’s Honor Roll six times and the Book Buster Club eight times. In addition, she is a four-time ACC Honor Roll selectee and two-time All-ACC Academic honoree. Most recently, she was one of 30 volleyball student-athletes named a 2020-21 Senior CLASS Award candidate.

About the Weaver-James-Corrigan Award
The Weaver-James-Corrigan Award is named in honor of the late Jim Weaver, Bob James, and Gene Corrigan, the first three ACC commissioners. The league’s first commissioner, James H. Weaver, served the conference from 1954-70 after a stint as the Director of Athletics at Wake Forest. His early leadership and uncompromising integrity are largely responsible for the excellent reputation enjoyed by the ACC today.

Robert C. James, a former Maryland football player, was named commissioner in 1971 and served in that capacity for 16 years. During his tenure, the league continued to grow in stature and became recognized as a national leader in athletics and academics, winning 23 national championships and maintaining standards of excellence in the classroom.

Prior to 1994, the Weaver-James postgraduate scholarships were awarded as separate honors, including the Jim Weaver Award, the Marie James Award and the Bob James Award.

About the Thacker Award
The Thacker Award, which originated in 2005, is awarded in honor of the late Jim and Pat Thacker of Charlotte, North Carolina. Jim Thacker was the primary play-by-play announcer for the ACC’s first television network. Recipients of the award must demonstrate outstanding performance both in athletic competition and in the classroom and intend to further their education through postgraduate studies at an ACC institution.