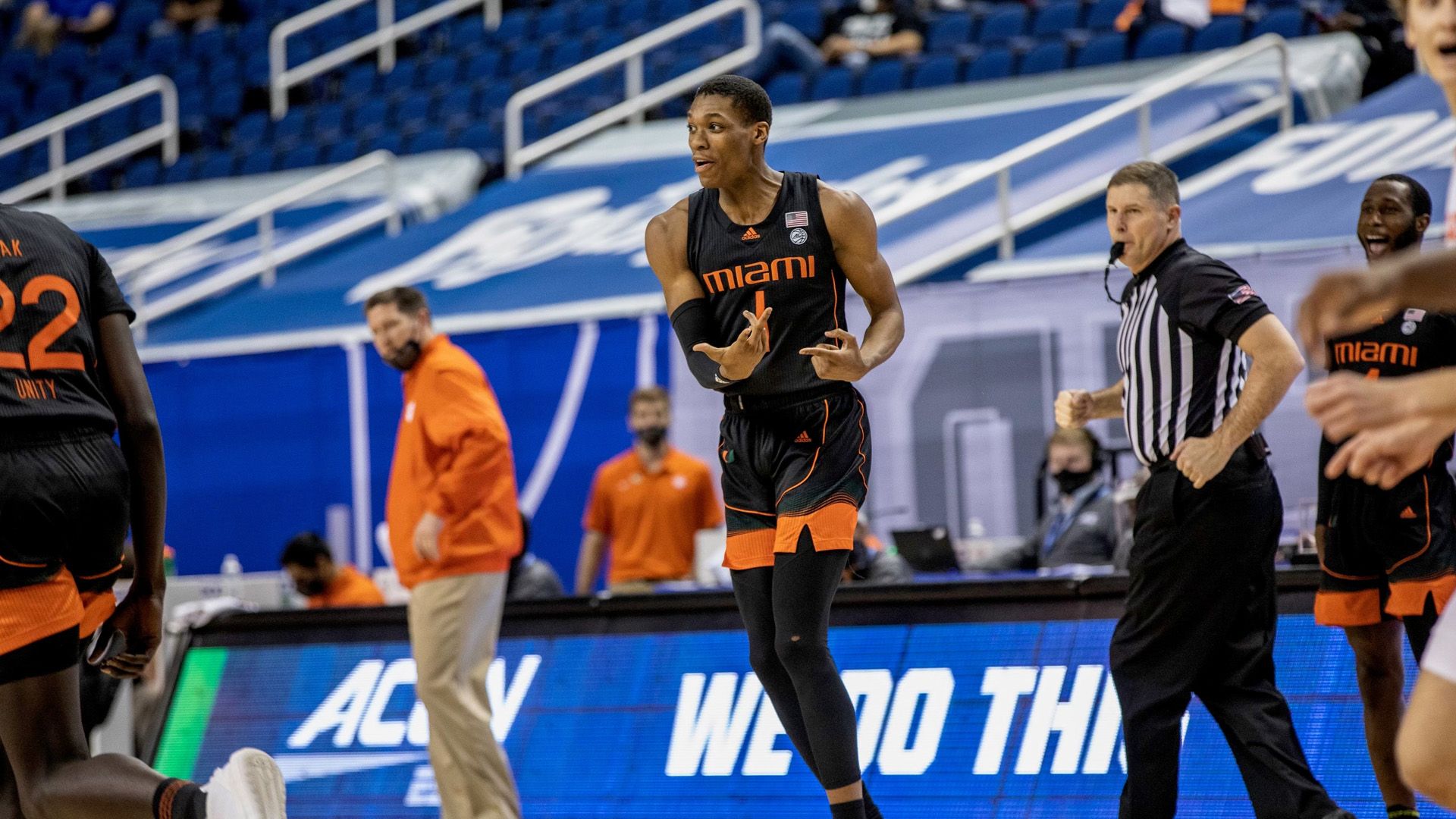 GREENSBORO, N.C. – The University of Miami men’s basketball team continued its march at the ACC Tournament with a 67-64 victory over Clemson Wednesday afternoon at the Greensboro Coliseum.

Miami, yet again playing with only six available scholarship student-athletes, shot a superb 53.7 percent from the floor to counteract the fifth-seeded Tigers’ excellent 3-point numbers. Sophomore guard Isaiah Wong scored a game-high 20 points for the Hurricanes, who became the first No. 13 seed to reach the quarterfinals.

“Clemson, I have the utmost respect for them, there staff, how hard there players play. I think Aamir Simms easily could have been the Most Valuable Player in the league,” Miami head coach Jim Larrañaga said after his 200th win with the Hurricanes. “For our guys to raise their level of performance against that kind of tenacious defense was very impressive. I am so proud of them for being able to do it in back-to-back games and still having the energy to execute. We did some terrific things and we are excited to be moving forward.”

Miami posted a 9-2 run early in the second session to take a 43-41 lead with exactly 15 minutes to play, but Clemson then scored seven straight points to go up by five with 12:53 on the clock. The Hurricanes once again countered; this time they logged a 16-2 burst, featuring a pair of corner 3-pointers by sophomore forward Anthony Walker, to grab a game-best nine-point edge, 59-50, with 7:26 to go.

“Deng Gak was in there and during that time period, he blocked a shot, he altered another one, we got a steal and bucket,” Larrañaga said of Miami’s success during the second-half surge. “Deng got two dunks and our guys were really functioning as a unit. We kept adjusting our offense, trying to find different ways to stretch their defense out.”

After a Miami turnover and then a defensive stop, Wong, for the second day in a row, sealed the win from the line, connecting on two free throws with two seconds left.

The Piscataway, N.J., native’s ACC-best 11th 20-point performance of the season came on 8-of-14 shooting from the field and a 3-of-3 clip at the stripe. He added six rebounds in 39 minutes of action.

Walker totaled 15 points, his 11th double-digit performance in the last 13 games after logging just four previously in his career, to go along with six boards and a career-best three steals. Redshirt senior guard Kameron McGusty added 14 points and a co-game-high four assists.

Clemson finished the day 12-of-23 from 3-point range, good for 52.2 percent mark that ranks as the second-best by a Miami foe in the ACC Tournament. The Hurricanes, meanwhile, dominated down low offensively, recording a 40-18 edge in paint points and finishing with a 53.7 percent (29-of-54) mark from the floor that is their third-best in ACC Tournament play.

The performance around the basket, as well as a defensive showing that included forcing 15 turnovers, helped Larrañaga become just the 17th person in history to amass 200 wins as an ACC head coach.

“Longevity has its reward. I have been able to coach for 50 years, I have been at Miami 10 wonderful years and the longer I am here, the more wins we can accumulate,” the two-time ACC Coach of the Year said of his achievement. “A lot of the credit goes to my assistant coaches, who have done a miraculous job of not only coaching, but recruiting the right guys who fit Miami.”

Up next for the Hurricanes is a Thursday matchup with fourth-seeded Georgia Tech at 2:30 p.m., live on ESPN from the Greensboro Coliseum.

MIAMI HURRICANES POSTGAME NOTES
– The Hurricanes moved to 14-17 all-time against Clemson, including 3-4 at neutral sites, 2-1 in the ACC Tournament and 8-6 in Larrañaga’s tenure.
– Miami is now 17-15 all-time in the ACC Tournament, including 11-8 under Larrañaga, 13-8 in North Carolina, 11-6 in Greensboro, 3-3 in the second round and 3-10 in second games.
– In addition, the Hurricanes moved to 7-13 as a lower seed, 7-4 as a double-digit seed, 2-0 as the No. 13 seed, 11-14 versus single-digit seeds, 4-1 against fifth seeds and 1-0 in 5/13 games at the ACC Tournament.
– This is the third time Miami has won multiple games at the ACC Tournament, joining the 2010 and 2013 events, both of which were also held in Greensboro.
– Including its time in the BIG EAST, Miami is now 23-27 all-time in conference tournament competition.
– Larrañaga, who entered the game with the 11th-most victories of any active Division I coach, is now 670-463 in 37 years as a head coach, including 200-129 in 10 seasons at Miami.
– Just 16 prior individuals, five of whom are still active, have reached 200 victories while serving as the head coach of an ACC team.
– Larrañaga is the 16th coach to register 200 victories at multiple Division I schools, including the eighth active coach to do so, alongside Dana Altman, Jim Calhoun, John Calipari, Bob Huggins, Bob Marlin, Rick Pitino and Roy Williams.
– Since Larrañaga arrived at Miami in 2011-12, the Hurricanes’ 11 wins in the ACC Tournament are tied with Notre Dame and Virginia for the third-most of any team, trailing only North Carolina (16) and Duke (14).
– The Hurricanes became just the eighth team to log an ACC Tournament win over a team it lost to twice in the regular season; such teams were previously 7-36.
– For the seventh time this season, Miami used a starting lineup of McGusty, Walker, Wong, redshirt senior center Nysier Brooks and senior guard Elijah Olaniyi.
– For the seventh straight game, Miami played without five scholarship players, all of whom are out for the season, due to injury: sophomore guard Harlond Beverly (back), senior guard Chris Lykes (left ankle), redshirt senior center Rodney Miller Jr. (right knee), freshman guard Earl Timberlake (left shoulder) and redshirt senior forward Sam Waardenburg (left foot).
– The last eight contests between Miami and Clemson have been decided by a total of 38 points, good for an average of just 4.8 per contest, with all determined by single digits.
– The lone two times Miami shot better than 53.6 percent from the field in the ACC Tournament came in 2016, when it logged a 56.6 (30-of-53) mark on 3/10/16 against Virginia Tech and a 54.8 (23-of-42) ledger on 3/11/16 versus fourth-ranked Virginia.
– The only team to shoot better from beyond the arc against Miami in the ACC Tournament was Florida State on 3/9/12, notching a 56.3 percent (9-of-16) mark.
– The Tigers’ 12 made 3-pointers tied for the second-most by a Miami opponent in ACC Tournament action, behind only the 13 North Carolina made on 3/17/13 in the title game.
– Tyson is the first player to make at least four 3-pointers without a miss against the Hurricanes in the ACC Tournament.
– Clemson’s 72.7 3-point percentage in the first half marked the best single-half shooting performance by a Miami foe this year.
– Miami shot 56.0 percent (14-of-25) in the opening half, tied for its fourth-best ledger in any half this season, including second-best before the break.
– The last time Miami shot over 50 percent in both halves was 12/29/20 at No. 24/RV Virginia Tech.
– Per WVUM’s Josh White, Wong is the third Hurricane with consecutive 20-point games in the ACC Tournament, joining Shane Larkin and Guillermo Diaz, with the former the only player to do so in the same year.
– The eight made field goals by Wong tied for the fourth-most by a Hurricane in an ACC Tournament contest.
– Wong scored in double digits for the 32nd time, including the 22nd this season, and reached 20 points for the 14th time, including the 11th this season.
– Walker, who logged his 50th appearance at Miami, registered double-figure points for the 15th time, including the 14th this year.
– McGusty, who eclipsed 1,000 field goals attempted in his career, notched double-digit points for the 62nd time, including the 13th in 2020-21.
– McGusty has notched at least four assists in six of the past seven games after reaching that total just three prior times in his career.
– Olaniyi surpassed 1,350 points as a collegian.
– Senior guard Willie Herenton hit a 3-pointer with 8:57 left in the first half, marking the second game in a row he has scored before the break after never doing so the first 41 outings of his career.