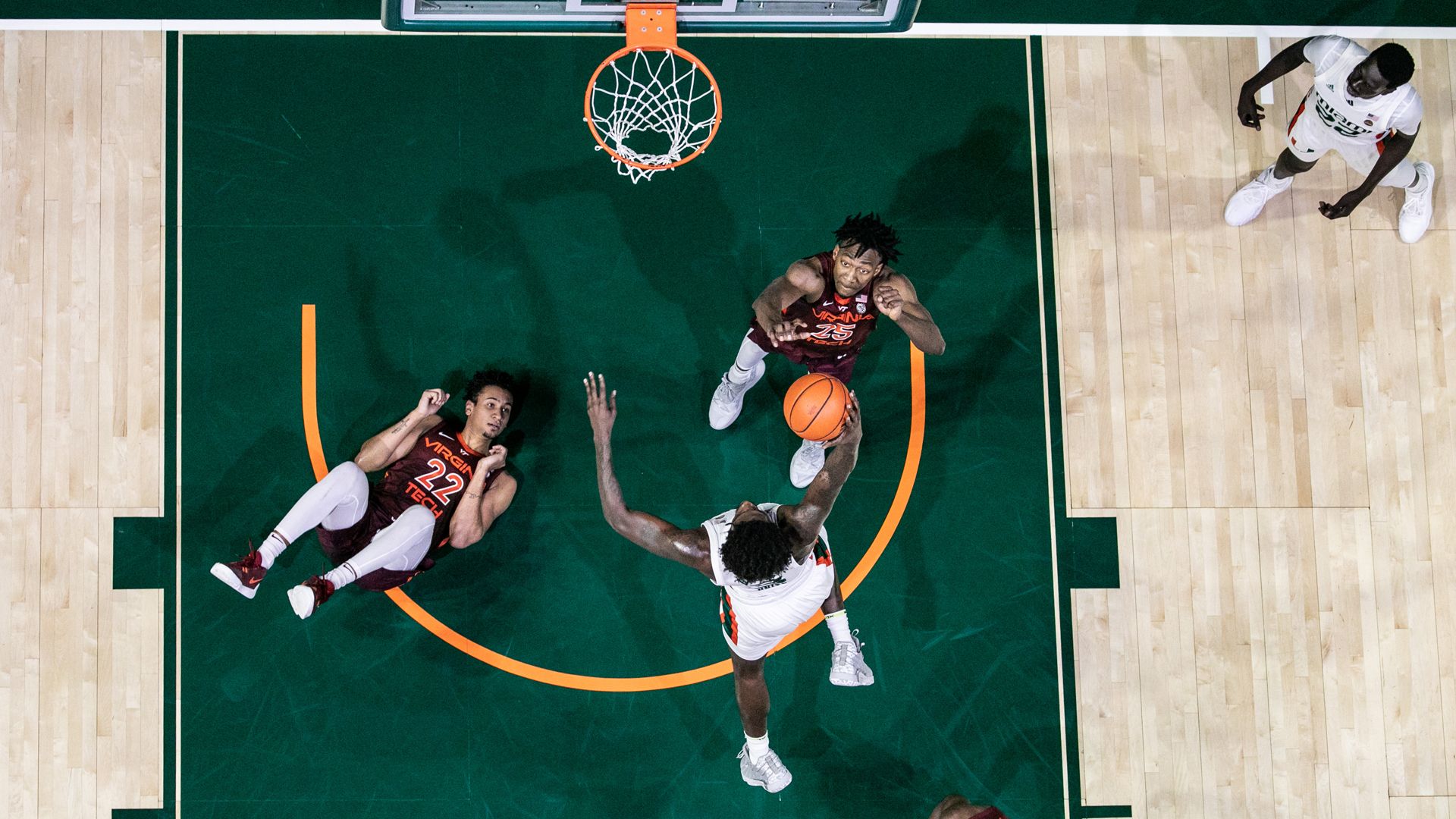 CORAL GABLES, Fla. – The University of Miami men’s basketball team fell to No. 16 Virginia Tech, 80-76, in an overtime thriller Saturday afternoon at the Watsco Center.

Once again playing with just seven scholarship student-athletes, the Hurricanes trailed by 11 with under eight minutes left before rallying to take a three-point lead, but could not hold on. Senior guard Elijah Olaniyi and sophomore guard Isaiah Wong tied for the team lead with 19 points in the narrow setback.

“Both teams deserve a lot of credit. I thought our guys did a great job,” Miami head coach Jim Larrañaga said. “…I told them they should not put their heads down. It’s very deflating losing a game like that.”

Each side got off to sluggish starts from the field, with the Hurricanes opening 4-of-17 from the floor and Virginia Tech (14-4, 8-3 ACC) starting just 6-of-19. However, Miami (7-11, 3-10 ACC) then hit five shots in a row on its way to making 7-of-10 to close the half, while the Hokies connected on their next three shots, en route to hitting six of its final nine in the frame.

The strong closes by both sides set the score at 31-28 in favor of Virginia Tech after 20 minutes. Redshirt senior guard Kameron McGusty scored 11 first-half points for the Hurricanes, as did redshirt junior forward Keve Auma for the Hokies.

Miami eventually upped its run all the way to 20-7, with a putback dunk by redshirt senior center Nysier Brooks capping the spurt and giving the Hurricanes a 68-66 advantage with 3:34 to go. It marked the Hurricanes’ first lead since it was 18-16 with 5:47 left in the first half.

“We, I thought, executed very well,” Larrañaga said. “We were down 11 and we switched to a 2-3 zone and tried to trap them out of it to change the tempo and that seemed to work. It got them off-balance.”

Miami went on to push its advantage to a game-high three points, but Virginia Tech tied it at 71 with 11 seconds left. Wong then drilled a contested 3-pointer to put Miami on top with 2.4 ticks to go, but sophomore guard Hunter Cattoor hit a buzzer-beating 3-pointer to send it to overtime.

Each team scored just two points in the first four-plus minutes of the extra session before Virginia Tech sophomore guard Nahiem Alleyne put the Hokies up, 78-76, on a floater with 25 seconds remaining. After a Miami offensive foul, Cattoor sealed it with two free throws at the other end with 4.4 ticks to go.

Olaniyi’s 19 points came on 6-of-11 shooting from the field and a 5-of-6 mark from the line in a career-high-tying 41 minutes. Wong, who grabbed eight boards and led Miami with a season-high-tying six assists in 40 minutes of action, went 8-of-9 at the stripe and scored all but three of his points in the second half.

McGusty finished with 18 points in 41 minutes and Brooks, who played a career-high 39 minutes, logged a 10-point, 12-rebound double-double, with the latter mark leading all players. Saturday marked the first game since Jan. 12, 2021, at Boston College in which four Hurricanes tallied double-digit points.

Redshirt junior forward Justyn Mutts scored a season-high 22 points for the Hokies, finishing 9-of-14 from the floor. He added nine rebounds, a season-best seven assists and two steals in the game.

Aluma, the reigning ACC Player of the Week, totaled 16 points, six rebounds and a season-high-tying five assists, though Miami did limit him to 5-of-13 shooting, including a 0-of-5 clip from deep.

The Hurricanes had a 13-2 edge in fast-break points, but the Hokies logged a 27-6 advantage in bench scoring. In addition, Miami went 22-of-26 (84.6 percent) from the free-throw line to set a season high in makes and percentage, but two if its misses came in overtime.

Miami now has one day off before its second straight Big Monday outing, with this one a 7 p.m. matchup against North Carolina at the Dean E. Smith Center in Chapel Hill, N.C.

MIAMI HURRICANES POSTGAME NOTES
– The Hurricanes moved to 24-19 all-time against Virginia Tech, including 12-6 at home and 14-9 in Larrañaga’s tenure.
– Larrañaga, who entered the game with the 11th-most victories of any active Division I coach, is now 667-458 in 37 years as a head coach, including 197-124 in 10 seasons at Miami.
– Larrañaga is now 11-12 in overtime games at Miami, including 8-7 in ACC play, 7-11 in single-overtime and 0-1 this season.
– For the first time this season, Miami used a starting lineup of Brooks, McGusty, Olaniyi, Wong and sophomore forward Anthony Walker.
– The Hurricanes have now used 10 starting lineups in 2020-21, including a different one in each of the past five games.
– Miami once again played without three of its four returning starters: senior guard Chris Lykes (left ankle), redshirt senior center Rodney Miller Jr. (right knee, season) and redshirt senior forward Sam Waardenburg (left foot, season).
– In addition, the Hurricanes were again without freshman guard Earl Timberlake, who is out indefinitely with a lingering left shoulder injury.
– Miami’s prior top total in made free throws was 21 against Jacksonville on 12/19/20 and its previous best mark in percentage was an 84.0 clip (21-of-25) also against the Dolphins.
– The last time a Miami opponent had five players scored in double figures was on 2/8/20 when eighth-ranked Florida State did so.
– Neither team scored in the first 4:03, with Miami going scoreless for the first 5:26 and without a field goal for the first 5:51.
– Both teams made exactly 16 of their first 36 field-goal attempts, through the first 25:30 of action.
– Mutts is 4-of-7 from 3-point range in two games against Miami and 6-of-28 in his other 16 outings this season.
– Olaniyi, who eclipsed 1,250 points as a collegian, scored in double figures for the 67th time, including the eighth this season.
– The five makes and six attempts both set new season bests from the stripe for Olaniyi, while Wong’s eight makes also set a season high.
– McGusty, who moved past 2,500 minutes played in his career, tallied double-digit points for the 56th time, including the seventh in 2020-21.
– Wong, who surpassed both 550 points and 50 made 3-pointers at Miami, recorded his 26th double-figure scoring performance, including his 16th this year.
– Wong and Mutts both joined Duke’s Jalen Johnson (1/19/21 at Pittsburgh) as the only players in the ACC to record 19 points, eight rebounds and six assists in a game this season.
– This is the third time in Larrañaga’s Miami tenure a player has recorded at least 19 points, eight rebounds and six assists in a game, joining Durand Scott (2/1/12 vs. Maryland) and Wong himself (1/16/21 vs. Louisville).
– Brooks scored in double digits for the 19th time, including the fifth this season, and posted 10-plus rebounds for the ninth time, including the third this season.
– Additionally, Brooks registered his fifth double-double, including his second as a Hurricane.
– Walker played a career-high 38 minutes, two more than his prior best.
– Sophomore guard Harlond Beverly reached 300 points in his career.