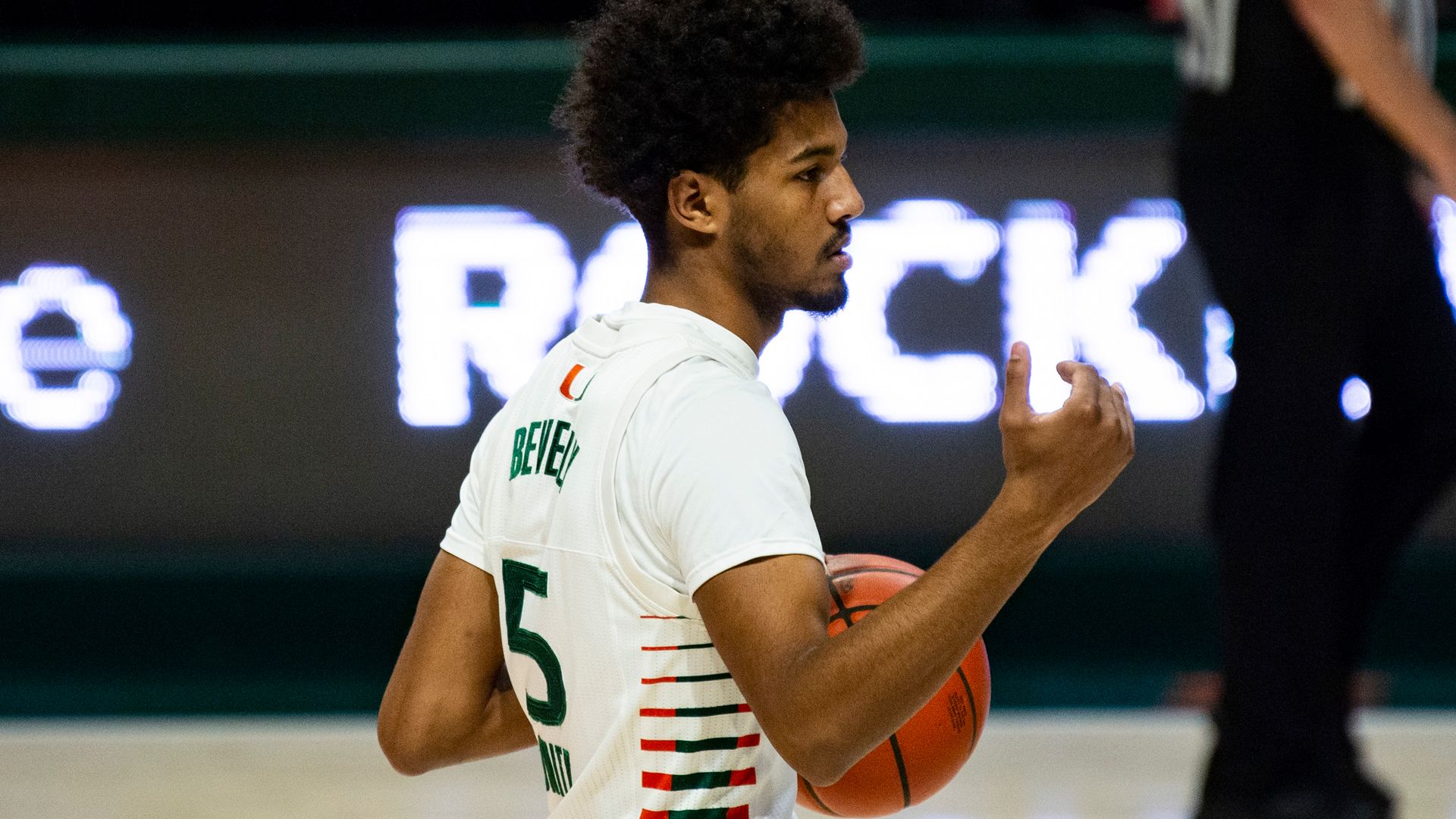 Redshirt senior guard Kameron McGusty scored a game- and season-high 20 points for the Hurricanes, who had just seven healthy scholarship players from start to finish.

Both teams shot 11 3-pointers before the break, with the Fighting Irish connecting on five and Miami (6-8, 2-7 ACC) making just one. In addition, Notre Dame made five of its final seven field goals of the half, while the Hurricanes hit just two of their last 11.

Notre Dame upped its cushion to 19 midway through the second half, but Miami countered with nine straight points in 32 seconds to spark a 17-5 run that trimmed the deficit to seven, 63-56, with 4:34 to play.

The Hurricanes, however, got no closer than that the rest of the way, as the Fighting Irish held on to register the victory.

“We did a very good job of putting some full-court pressure on them, but it was hard to get it set up after that initial burst,” Larrañaga said. “Guys started to get fatigued and we couldn’t sustain the effort through the end. They were able to get a breakaway layup or dunk, but the press was effective for a three- or four-minute period.”

McGusty’s 20 points came on 8-of-15 shooting, as he set a season high in makes, while also adding three assists and a season-high two steals. Sophomore guard Isaiah Wong added 16 points, while senior guard Elijah Olaniyi had 10 points and a co-team-high five boards to go along with a season- and game-high four steals.

In addition, redshirt junior forward Deng Gak finished with six points to go along with a co-team-best and season-high-tying five rebounds. He also logged a career-best three steals to lead all players and matched his career high with 20 minutes played.

Junior guard Prentiss Hubb went 5-of-7 from beyond the arc and totaled 19 points to lead a trio of Fighting Irish players with 16-plus in the scoring column. He added nine assists, good for the most by a Miami opponent this season.

Up next for Miami is a trip to Tallahassee, Fla., where it meets RV/No. 25 Florida State Wednesday at 6 p.m., live on ACC Network from the Donald L. Tucker Civic Center.

MIAMI HURRICANES POSTGAME NOTES
– The Hurricanes moved to 12-13 all-time against Notre Dame, including 6-6 at home and 5-5 in Larrañaga’s tenure.
– Larrañaga, who entered the game with the 11th-most victories of any active Division I coach, is now 666-455 in 37 years as a head coach, including 196-121 in 10 seasons at Miami.
– For the first time this season, Miami used a starting lineup of McGusty, Olaniyi, Wong, redshirt senior Nysier Brooks and freshman forward Matt Cross, marking its sixth different opening group in 14 games.
– Miami once again played without three of its four returning starters: senior guard Chris Lykes (left ankle), redshirt senior center Rodney Miller Jr. (right knee, season) and redshirt senior forward Sam Waardenburg (left foot, season).
­- As announced prior to tip-off, freshman guard Earl Timberlake is out indefinitely with a lingering left shoulder injury, while sophomore forward Anthony Walker is out with a right foot injury and is day-to-day moving forward.
– Miami’s 22 points before the break tied for its second-fewest in a half this season, matching its total in the first half at Syracuse (1/19/21) and trailing only the mark (14) in the opening 20 minutes against Purdue (12/8/20).
– The Fighting Irish shot 65.4 percent (17-of-26) in the second half, good for the best mark by a Miami foe in a frame since North Carolina recorded a 62.1 percent (18-of-29) mark on 1/25/20.
– Miami finished with 11 steals in the setback, tied for its second-most in a game this year, equaling the mark set against North Florida (11/29/20) and trailing just the total (14) versus North Carolina (1/5/21).
– Brooks surpassed both 550 points and 1,750 minutes played as a collegian.
– McGusty scored in double figures for the 53rd time, including the fourth in 2020-21, and reached 20 points for the 11th time, including the first in 2020-21.
– The eight made field goals tied McGusty’s career best in ACC play, a mark previously set 1/12/20 against Pittsburgh.
– Olaniyi recorded his 65th double-digit point total, including his sixth at Miami.
– Wong logged double-figure points for the 22nd time, including the 12th this season.
– Gak’s only other outing in his career in which he played 20 minutes was 11/24/19 against UConn in Charleston, S.C.