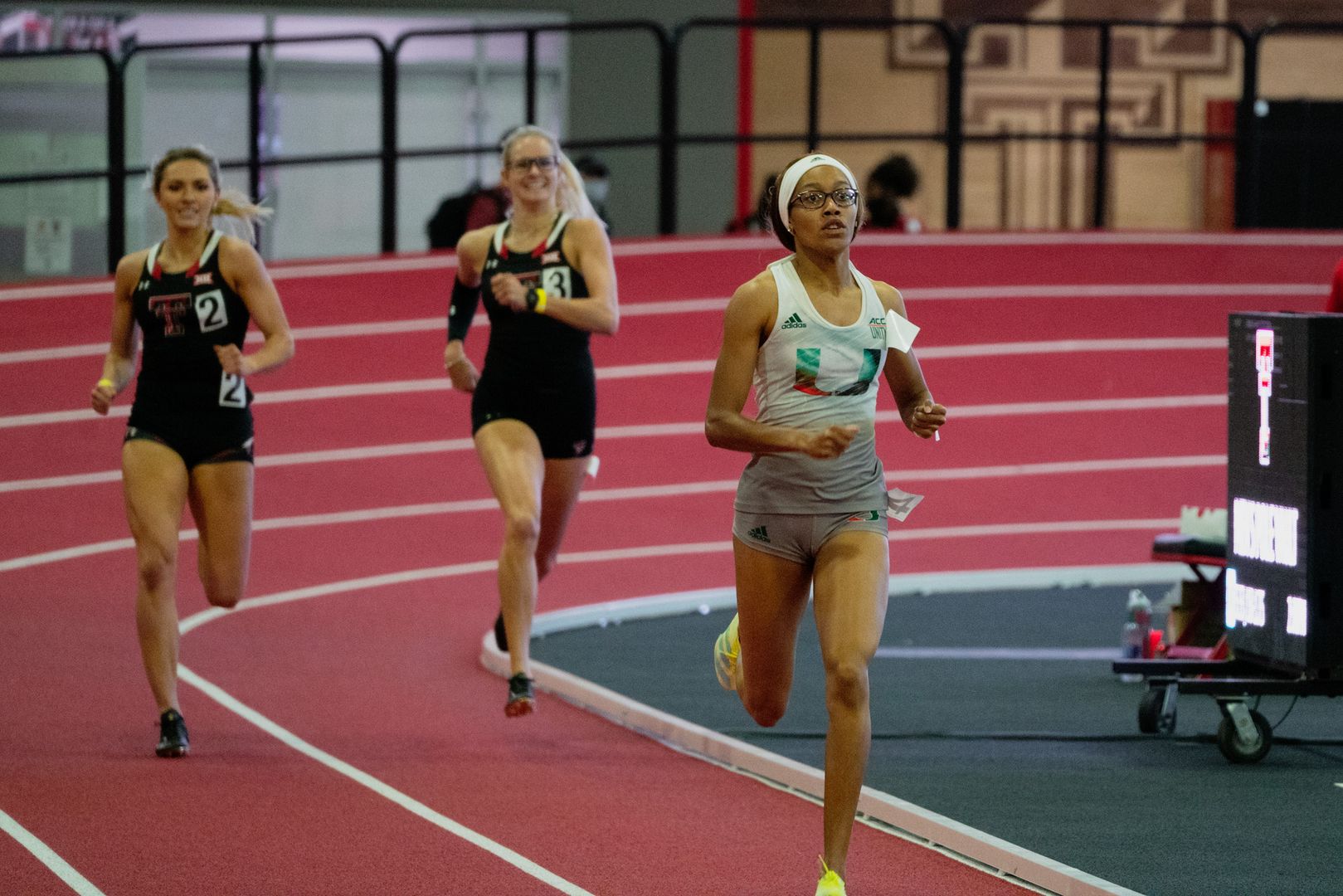 “I couldn’t be more proud of our kids since we’ve came back to practice on August 31st because they’ve been extremely focused and really determined to make sure they do everything in their control for the season to happen,” director of track and field/cross country Amy Deem said. “To get on the plane and come to Lubbock and just to be out there and compete was great, especially for our upperclassmen who had their season ripped away from them last year.”

The young squad that featured eight freshmen, with seven making their official debuts in Canes uniforms, started the indoor season after 10 months away from competition.

“We have such a great group of young kids and to give them their first experience was really great and we had a productive weekend,” Deem said.

Miami dominated the 600 yard run on both sides with junior Kayla Johnson breaking the program record and winning the women’s event with a time of 1:20.75. Johnson’s time broke the seven-year top spot held by Taneisha Cordell. Johnson also broke Miami’s program record last season in the 600m run on the same track.

“Kayla ran very aggressive and it was a good opening meet for her that will set her up well to have some good 800s moving forward,” Deem said. “She’s been training well and now it needs to carry over to her 800s.”

Freshmen Solomon Strader and Oskars Bambals had stellar debuts for the Canes each breaking the program record in the men’s 600 yard run, but Strader took second place with his time of 1:10.13, while Bambals finished third with a time of 1:10.71.

“Solomon and Oskars are what you want out of freshmen. They came in and weren’t intimidated and ran very strong in the 600 as well as the 4×400,” Deem said. “They came to work and they were very competitive and I’m really excited about their future.”

Meanwhile on the track, graduate student Alfreda Steele controlled the women’s 60m dash from the start, registering a time of 7.30 seconds to win the event. Her time currently ranks as the seventh fastest time in the NCAA, while sophomore Jacious Sears finished second with a time of 7.36, ranking 15th in the NCAA.

“Freda has been training extremely well and it’s the most consistent that she’s been able to train and I expected some good marks from her today,” Deem said. “She’s going to continue to grow and run with more confidence each week.”

Sears finished the day winning the women’s 200m dash with a time of 23.97 seconds. Freshman Blanca Hervas made her debut for Miami running a time of 24.90 seconds to finish fifth, overall.

Fellow freshman Sierra Oliveira grinded out a top-notch performance in the women’s 1000m, winning the event with a time 2:55,23, which ranks as the third-fastest time in program history.

“As Sierra gets stronger and understands what her strengths and weaknesses are as a runner, I think we’ll see her get better and better,” Deem said. “I liked her poise in the entire race, but she really took charge in the final 200m.”

Oliveira’s twin sister Moriah also made her debut finishing second in the women’s 400m with a time of 55.61 seconds.

Sophomore Justin Forde won the men’s triple jump with a mark of 15.46m, while sophomore Kevin Snyder finished third 14.70m. Freshman Ashley Moore finished in the top 10 on the women’s side with a mark of 12.21m in her collegiate opener.

“It’s great to walk away with a win in any event, but even Justin would admit, it’s not the performance he was looking for,” Deem went on to say.

Sophomore Russell Robinson was the lone Cane to compete in the long jump and finished third with his mark of 7.34m. Taylor Wright finished fourth overall in the women’s high jump with her mark of 1.73m.

Senior standout Kevin Arreaga finished second in the men’s weight throw with his mark of 20.44m and Jeffrey Williams finished eighth with a 17.50m. Williams also finished fifth in the men’s shot put with a mark of 15.47m.

Three Canes finished in the top 10 in the women’s shot put with Ajagbe leading the way in fourth with a mark of 15.17m, Selina Dantzler in eighth at 14.28m and Hall just behind in ninth at 14.18m. Kristina Rakocevic finished with a mark of 12.98m.

Miami closed out the competition finishing second in both the men’s and women’s 4×400. The men’s side was composed of four freshmen with Berberena, Strader, Gould and Bambals who posted a time of 3:14.84. Johnson was the lone upperclassmen on the women’s side, which featured the Oliveira sisters and Hervas who finished with a time of 3:43.61.

Heading into Clemson next weekend for the Bob Pollock Meet, Deem hopes to see her upperclassmen take more leadership of the young squad while also continuing to improve individually.