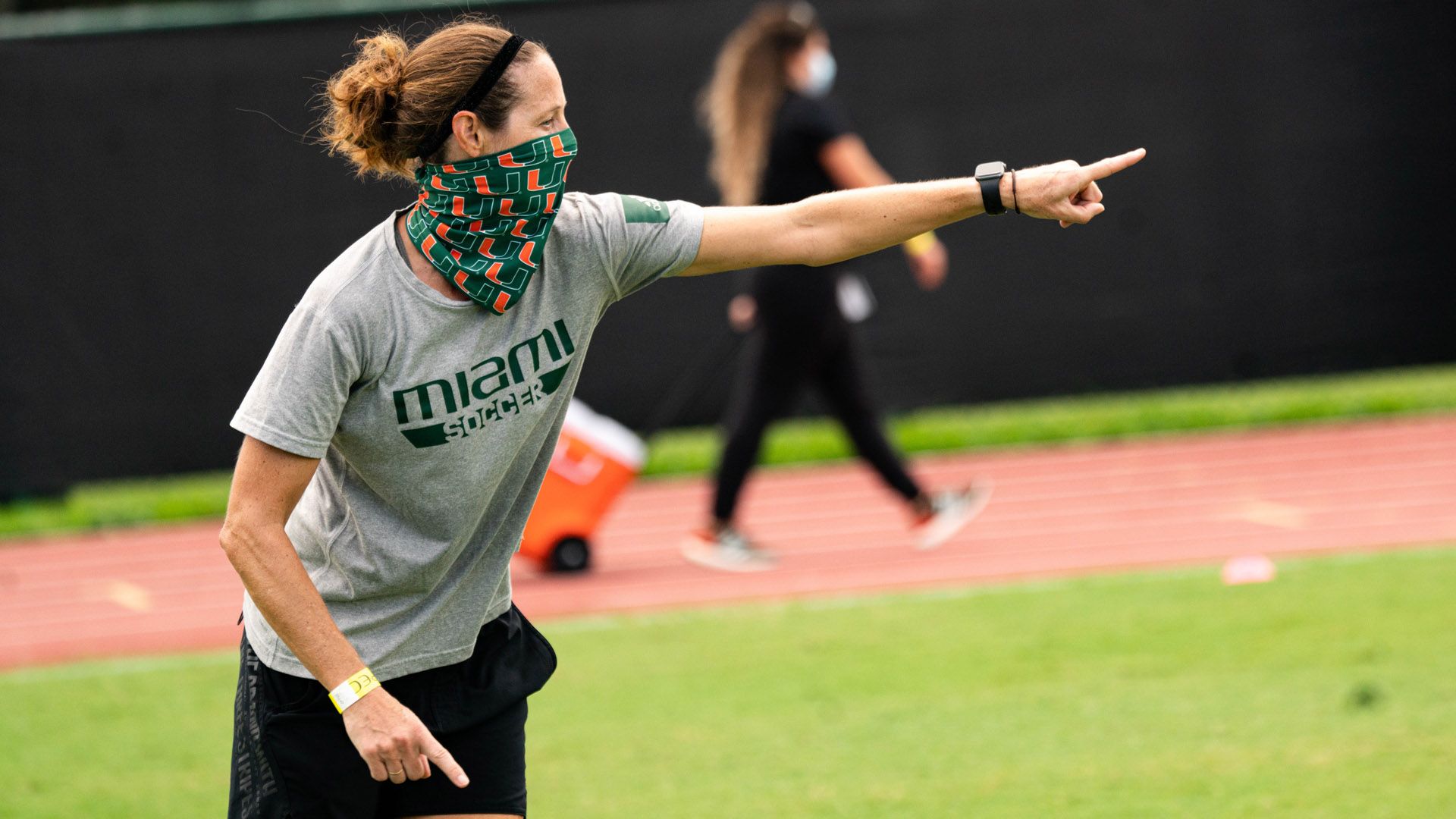 A 5-foot-3 midfielder/forward from Waldorf, Md., Felton takes care of business both on the pitch and in the classroom, maintaining a perfect 4.0 GPA. A member of McLean ECNL, she traveled to Scotland to train with Celtic FC, while also working with the Washington Spirit coaching staff.

“We’re thrilled that Jordie is joining the Miami program,” Barnes said. “She comes from McLean ECNL, who currently have several players competing at the ACC level. Her training environment has been focused on player development, emphasizing technique, tactics and competitive mentality. Jordie’s skill and deception, her effectiveness in and around the box and composure will make her a competitive addition to the attack.” 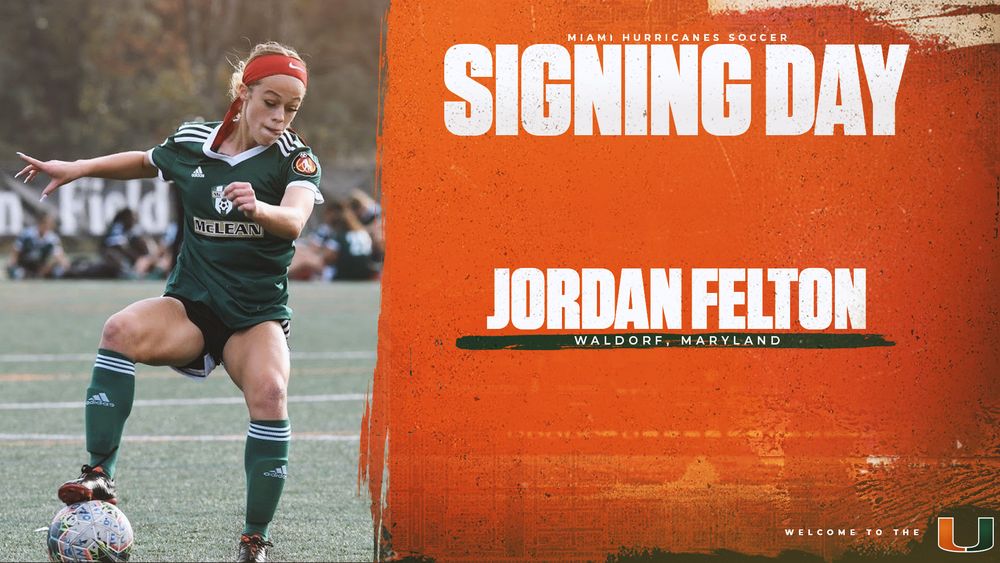 Growing up in Broward County, Klein is set to take her talents to Coral Gables after participating in the Florida Olympic Development Program. A 5-foot-9 goalkeeper hailing from Cooper City, Fla., she is ranked among the IMG Top 150 by Top Drawer Soccer. Selected for the Region 3 ODP pool, she also was selected to the U19 Israeli National Team.

“We’re eager for Sky to become a part of the Cane family,” Barnes said. “She just finished playing for the Weston Girls Academy and will enroll at the University in January. Her club and personal training is with and against numerous future and current ACC players, which prepares her daily for college. Sky is invested in developing her skillset and tactics and has a strong work ethic. She’ll be a competitive addition to our goalkeeper core.” 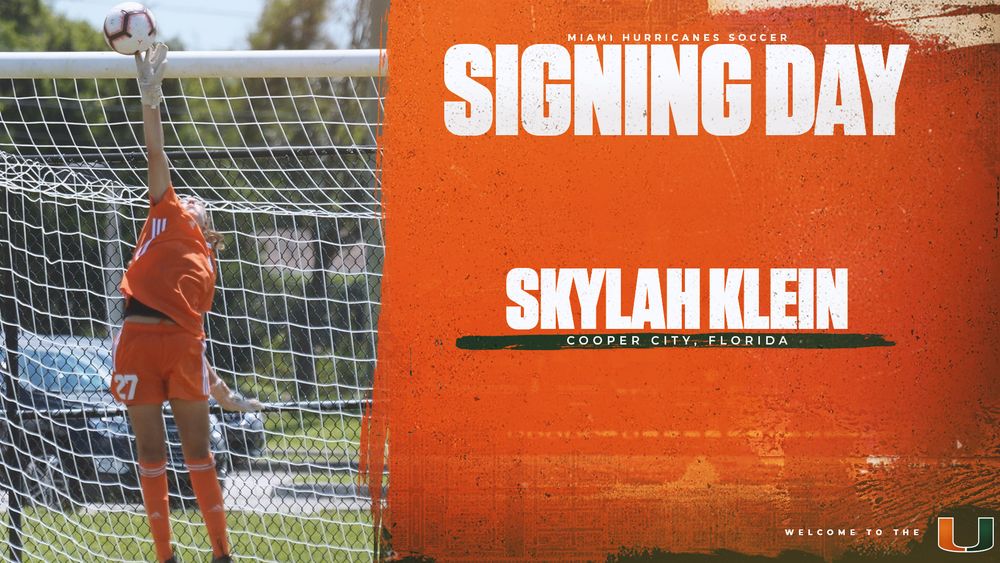 A native of Lake Orion, Mich., Llewellyn attends Lake Orion High School and competes for the Michigan Hawks. The 5-foot-6 midfielder helped lead the Hawks to the ECNL National Playoffs in 2017, the U.S. Academy Playoffs in 2018 and reached the ECNL title match in 2019. From 2015-17 she played in the Michigan ODP pool and was invited to the USYS ODP Region II pool and camp in 2016.

“We look forward to Claire joining the Hurricane program. She is comfortable on the ball and does a good job of escaping pressure,” Barnes said. “Coming from the Michigan Hawks ECNL club, which numerous successful ACC players have played for, she will be prepared for the collegiate environment. Claire’s spacing, awareness and vision will help her to be competitive in the midfield line.” 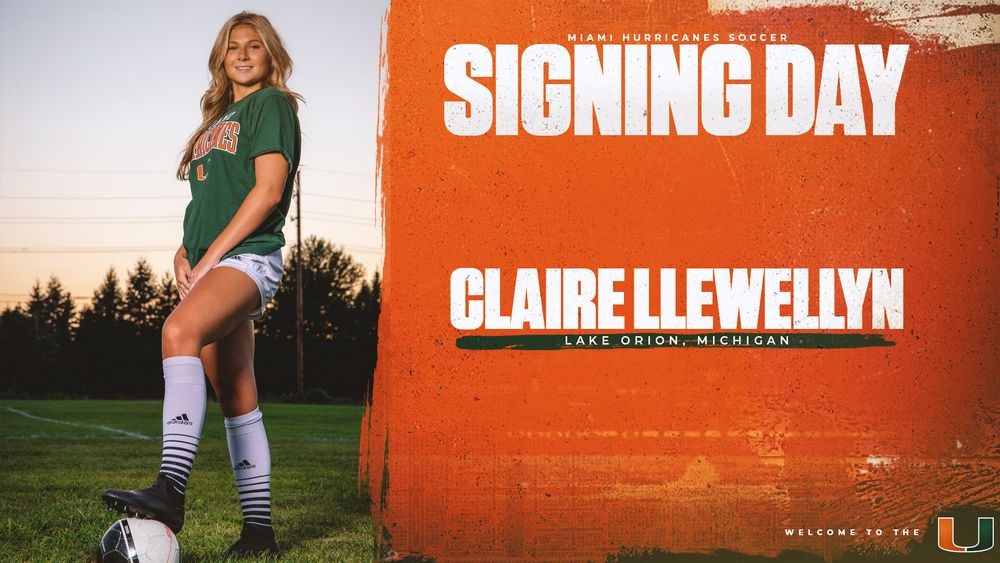 A 5-foot-8 midfielder from Fairfax Station, Va., Meeks participated on McLean ECNL and helped lead her to team to a first-place finish in 2019-20. One of the top goal scorers in the ECNL last season, she was also a two-time ECNL Mid-Atlantic All-Conference team member.

“We’re excited for Lauren to join the Miami program. She’s versatile, playing in the forward and midfield lines and will be competitive for both,” Barnes said. “She also comes from the Mclean ECNL club. Her training environment has emphasized technique, tactics and physically competing on both sides of the ball against a number of ACC level players. Lauren is a student of the game and has prepared for the collegiate demands.” 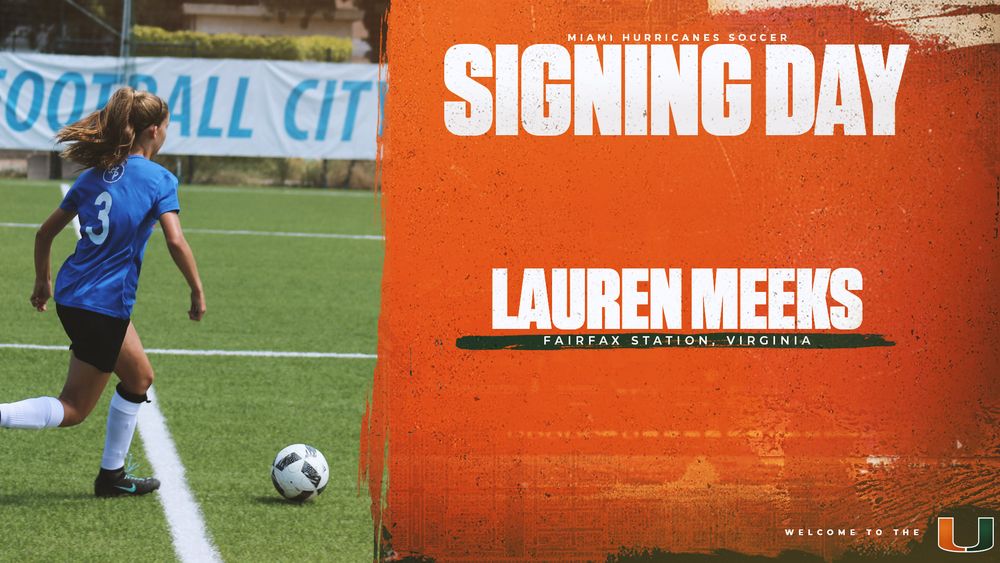 One of two Hurricanes set to make the trip from Canada, Rogers is a 5-foot-7 midfielder from Vancouver, British Columbia. Competing for the Vancouver Whitecaps FC Girls Elite REX program since 2016, Rogers has had the opportunity to travel the world while making a major impact on both ends of the pitch. Dating back to 2015, while competing for Fusion FC, she capped the year as the team’s MVP and the Club Female Athlete of the Year. In 2017, she competed in the U17 Four Nations tournament in Weifeng, China, while also being invited to a trio of U17 National Squad EXCEL Camps. In 2018, she was member of Canada’s U15 National team member, competing in the CONCACAF Championships in Bradenton, Fla. Most recently, she was invited to the U20 FIFA/Blue Stars Youth Cup in Zurich, Switzerland.

“We’re eager for Maya to become a Hurricane. She has a good technical base that helps her control the ball in possession and escape pressure,” Barnes said. “She comes from the Whitecaps in Vancouver. Her training environment emphasizes player development and she routinely plays games against boys, challenging her physically and tactically. Maya will be a competitive addition to the front 6 with her vision, technique and athleticism.” 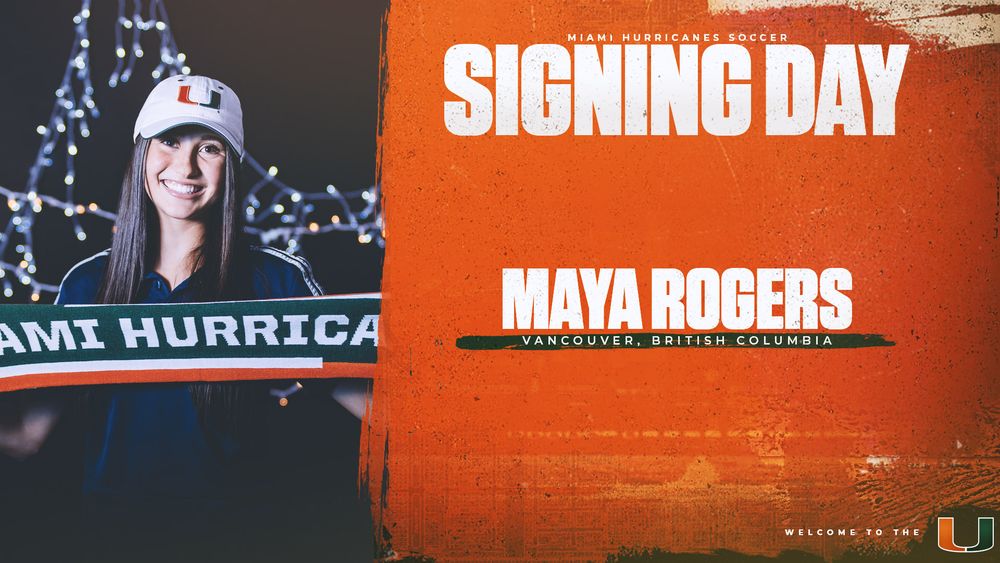 Hailing from Cary, N.C., Salas is a 5-foot-7 center back spending five years with the North Carolina Courage. Competing in both Academy and ECNL leagues, in 2017 she helped the team reach the ECNL national champions league. From 2015-18 she spent time training in the USDP and in eighth grade she led her team to an undefeated season.

“We look forward to Hallie joining the Hurricane program,” Barnes said. “She plays for the North Carolina Courage, formerly in the Development Academy. Her youth training environment has emphasized technique and tactics within a high level squad. Hallie is comfortable on the ball and is confident to play out of pressure from the back. She will be competitive player within our defensive core.” 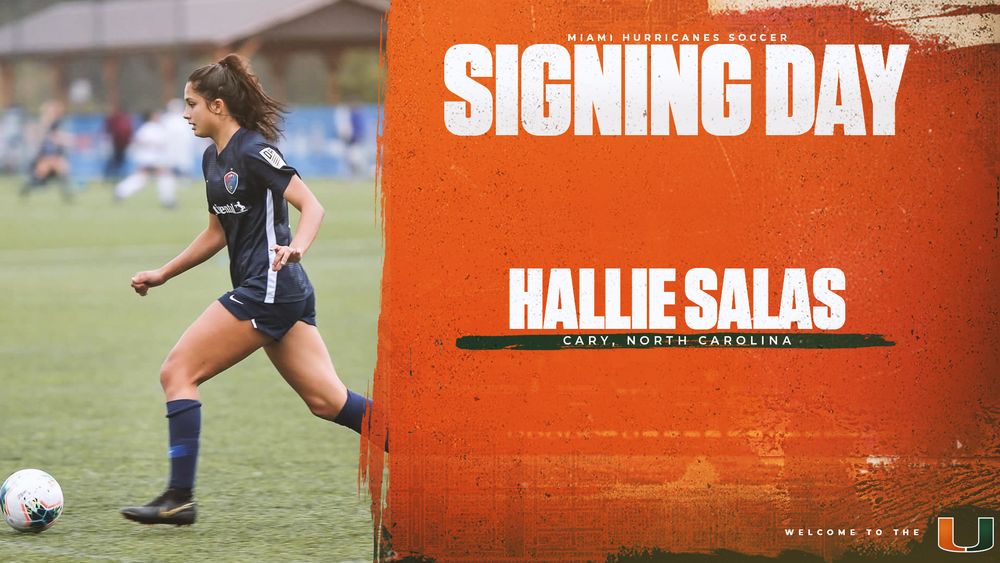 Joining Rogers on the journey from The Great White North to The City Beautiful, Tupper is a 5-foot-8 forward/midfielder hailing from Langley, British Columbia. Also a member of the Vancouver Whitecaps Rex 2017 club, she has been a dominant force on the attack, registering 74 goals since 2014. A two-sport athlete, Tupper won a pair of U15 Canadian National Championships in 2017, both in soccer and softball. Individually, she secured BC Provincial MVP honors in 2017, while her club secured the title in 2016 and 2017.

“We’re excited for Mikayla to join the Miami program. She’s a strong forward who causes problems for defenses and also comes from the Whitecaps,” Barnes said. “Her training environment has allowed her to develop under the speed and pressure of playing against boys, which will help her with the transition to the ACC speed of play. Her athleticism and goal scoring mentality will make her competitive in our attacking group.” 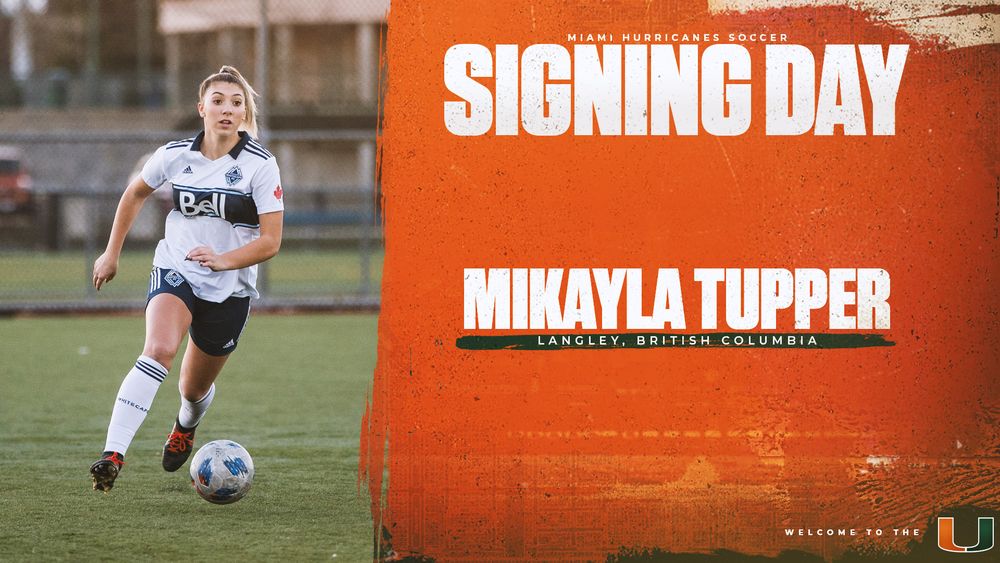