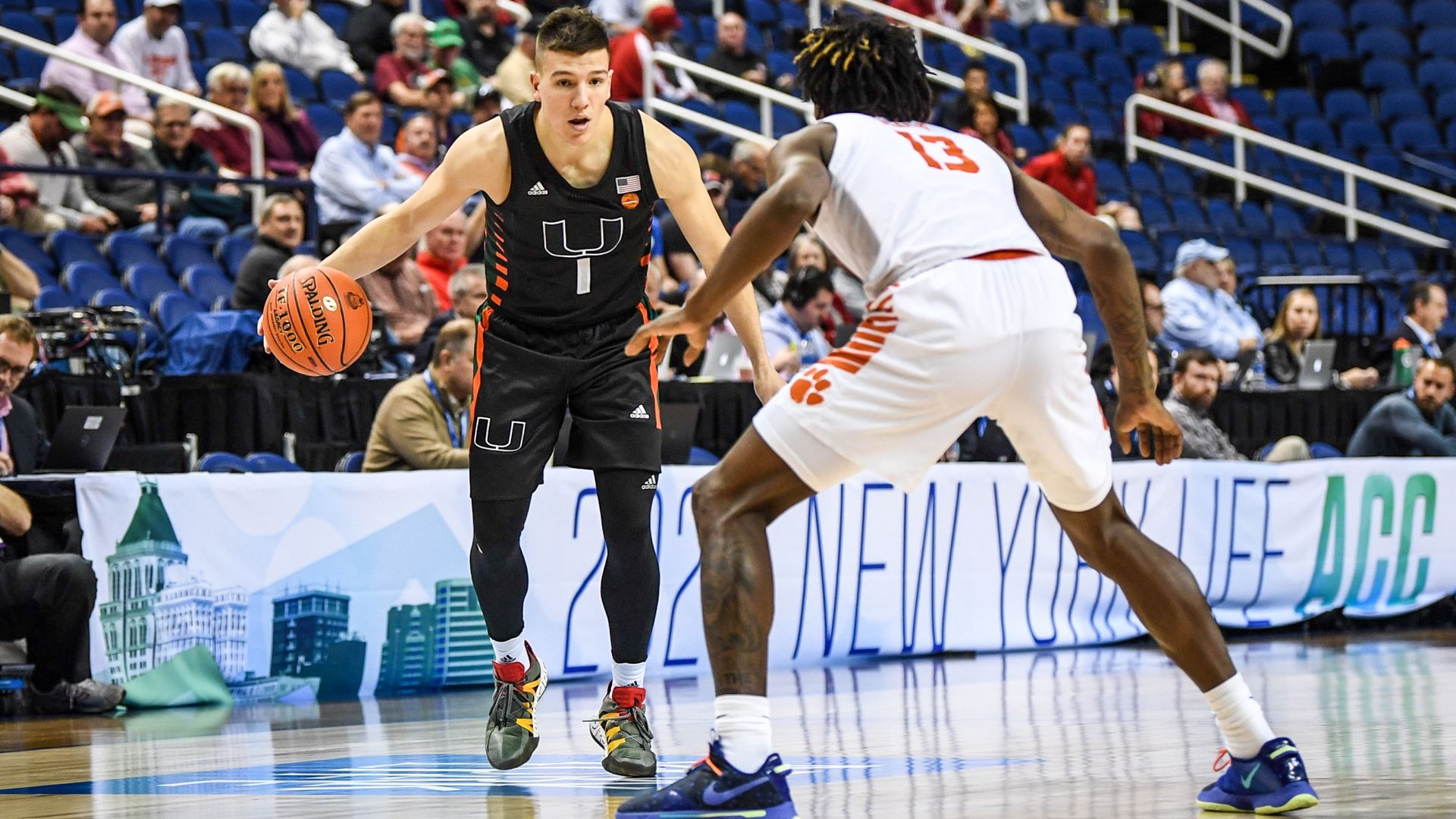 GREENSBORO, N.C. – The University of Miami men’s basketball team dropped a narrow 69-64 decision to Clemson Wednesday afternoon in the second round of the ACC Tournament.

Junior guard Chris Lykes paced the ninth-seeded Hurricanes with a game-high 21 points at the Greensboro Coliseum, but it was not enough in a back-and-forth affair against the eighth-seeded Tigers.

“Well, I thought our defense for the first 30, 35 minutes was good, but in the last five or six minutes, it looked like they were able to attack us and get to the foul line far more,” Miami head coach Jim Larrañaga said. “We are a team that rarely fouls—I think we are in the top-10 in not fouling—and they made 18 of 19 free throws. That was the difference in the game.”

The Tigers, after missing 11 of their prior 12 shots and going scoreless for 6:14, evened the game at 21 with back-to-back baskets, but freshman guard Isaiah Wong’s putback layup at the buzzer gave Miami a 23-21 lead at the break.

Miami shot just 2-of-15 (13.3 percent) from 3-point range in the first half, including missing 10 of its first 11 tries, and tied for its second-lowest point total in a frame this season. However, the 21 points it allowed were its second-fewest against.

The score was tied at 53 with four minutes to go, but the Tigers scored 11 consecutive points, eight at the line and the latter three beyond the arc, to take a game-high 64-53 lead with 1:06 to go. Miami trimmed the deficit to four, 68-64, with 14.5 ticks remaining, but could not climb all the way back.

Lykes, who wore a mask due to face injuries sustained last Wednesday against No. 22 Virginia, shot 5-of-11 from 3-point range. Senior guard Dejan Vasiljevic finished 6-of-11 from the field to total 17 points and redshirt junior guard Kameron McGusty added 12 points.

The Tigers made their first 18 free-throw attempts, all of which came after halftime, before missing their final attempt in the closing seconds. Their 94.7 percent clip from the line was the best mark by a Miami foe all season and the top mark by a Miami opponent ever in ACC Tournament play.

Wednesday’s contest served as the final collegiate outing for Vasiljevic and senior forward Keith Stone. Eight other letter winners are scheduled to return for the Hurricanes in 2020-21.

MIAMI HURRICANES POSTGAME NOTES
– The Hurricanes moved to 13-15 all-time against Clemson, including 2-4 at neutral sites, 1-1 in the ACC Tournament and 7-4 in Larrañaga’s tenure.
– Larrañaga, who entered the game with the 10th-most victories of any active Division I coach, is now 660-447 in 36 years as a head coach, including 190-113 in nine seasons at Miami.
– Miami moved to 15-15 all-time in ACC Tournament play, including 9-8 under Coach L, 9-6 in Greensboro, 12-4 in opening games, 2-4 as a No. 9 seed and 5-13 against higher seeds.
– For the first time this season, Miami used a starting lineup of McGusty, Stone, Vasiljevic, Wong and redshirt junior forward Sam Waardenburg.
– Miami finished the season 15-1 when leading or tied at halftime and 0-15 when trailing through 20 minutes.
– The only team to score fewer than 21 points in a half against Miami this season was Coppin State, which tallied just 20 before the break Dec. 17 at the Watsco Center.
– Miami’s two other halves scoring 23 points or fewer were both March 4 against then-No. 22 Virginia at the Watsco Center, as it logged 23 before the intermission and 21 after.
– The Tigers attempted zero free throws in the first half, marking the second time this season a Miami foe had none in a half, along with No. 22 Virginia doing so in the first session March 4.
– The prior top free-throw mark by a Miami opponent in 2019-20 was 94.1 percent, a ledger tallied by eighth-ranked Florida State, which went 16-of-17 on its home court Feb. 8.
– The previous best free-throw percentage by a Hurricane foe all-time in ACC Tournament action was 92.3, which Syracuse posted on a 12-of-13 tally on March 8, 2017.
– Miami’s 11 3-point makes were its second-most in ACC Tournament play and its 36 attempts were a new high, passing the prior mark of 29 set in its last appearance, March 13, 2019, against No. 16/15 Virginia Tech.
– Vasiljevic registered his 65th double-digit scoring performance.
– Lykes notched his 64th double-figure point total and 16th 20-point outing.
– McGusty recorded his 49th double-digit scoring total.
– Waardenburg surpassed 250 rebounds as a Hurricane.
– Freshman forward Anthony Walker made his 25th appearance as a collegian.