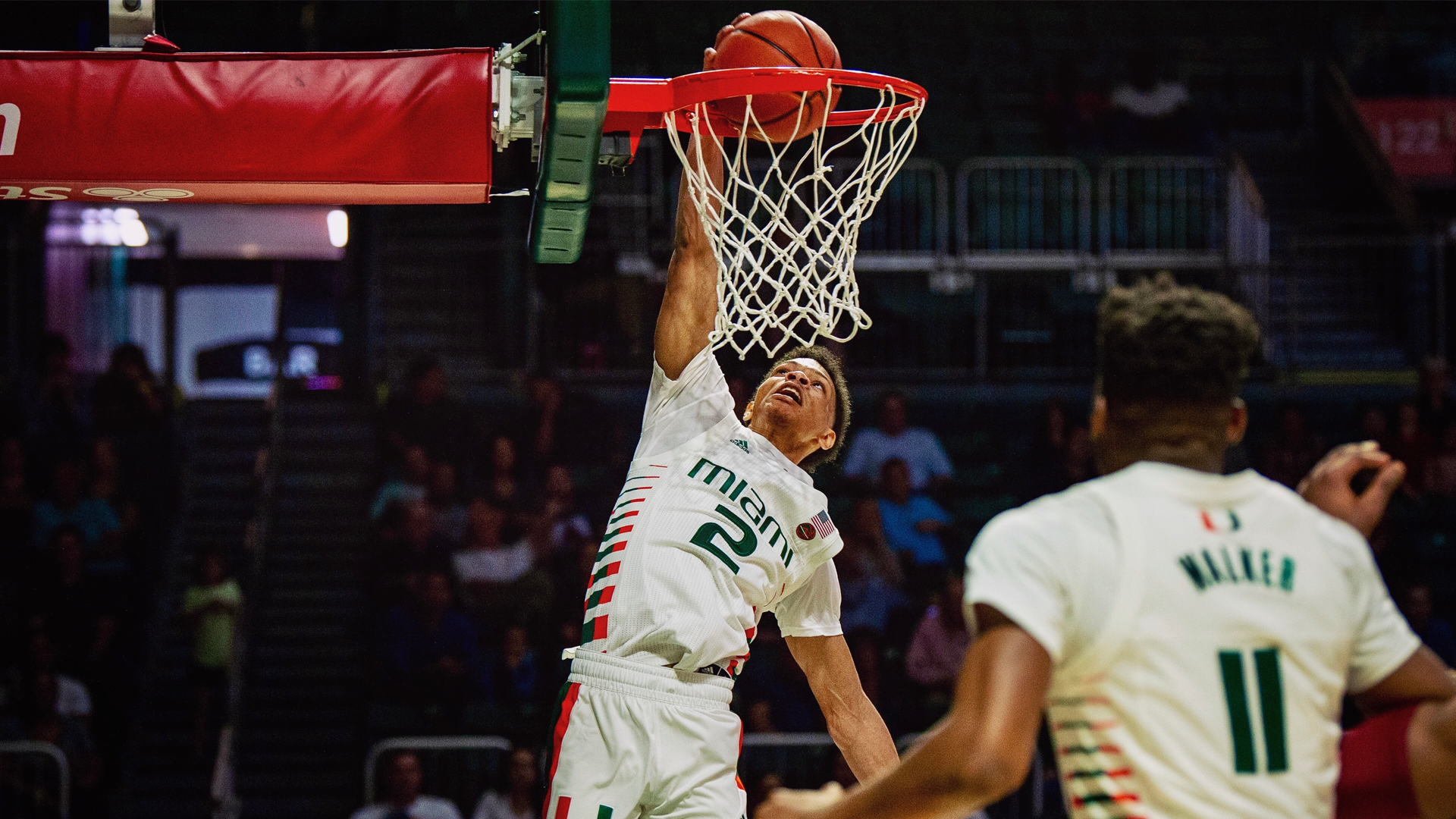 By Alex Schwartz
HurricaneSports.com
CORAL GABLES, Fla. – The University of Miami men’s basketball team turned in a dominant performance Wednesday night in an 85-58 victory against Boston College at the Watsco Center.

Guard Isaiah Wong paced all scorers with 21 points for the Hurricanes, who led for over 31 minutes, to become the program’s first freshman with back-to-back 20-point outings in regulation affairs since Marcus Barnes in 2001.

The Hurricanes held Boston College to 10-of-34 (29.4 percent) shooting in the opening 20 minutes, including a 1-of-10 (10.0 percent) clip from beyond the arc, the latter the lowest mark this year in a frame by a Miami foe.

The Eagles connected on five straight field goals midway through the second half to make it a 12-point game, 55-43, with 10:06 to go. They got no closer, though, as Miami answered with seven consecutive points in 58 seconds.

From there, Miami continued to control play, upping its lead as high as 29, en route to the 27-point decision, its largest conference win since Feb. 22, 2014, a 69-42 triumph also over the Eagles.

Wong’s 21 points came on 7-of-10 shooting from the field, including a 2-of-2 mark from deep, and a 5-of-6 tally from the line. He added five rebounds, tied his career best with three assists and did not commit a turnover.

“Isaiah continues to do a lot of things well,” Larrañaga said. “He is scoring the ball well, he is shooting a high percentage, he is making his free throws, he is handling the ball, but he is also defending and rebounding. And when a guy contributes in so many different areas—he had three assists today—it just shows he is really, really focused.”

Freshman forward Kamari Williams paced the Eagles, who suffered their second-largest loss of the year, with 14 points. Freshman guard Jay Heath and senior forward Nik Popovic each scored 10, with Miami holding the former to a 4-of-17 mark from the floor.

The Hurricanes, who held Boston College to just two 3-point makes on its first 16 tries, shot 57.7 percent (30-of-52) from the floor, good for their second-best total of the year. Their 85 points were their most in a regulation ACC contest since logging 91 on Feb. 27, 2017, in a victory at ninth-ranked North Carolina.

Up next for Miami is a Saturday afternoon home affair against Wake Forest, as it hosts the Demon Deacons at 2 p.m., live on RSN.

MIAMI HURRICANES POSTGAME NOTES
– The Hurricanes moved to 25-26 all-time against Boston College, including 14-11 at home and 12-2 in Larrañaga’s tenure.
– Larrañaga, who entered the game with the 10th-most victories of any active Division I coach, is now 657-443 in 36 years as a head coach, including 187-109 in nine seasons at Miami.
– With the victory, Coach L tied Ralph Miller for No. 37 on the NCAA all-time wins list (min. 10 years at a Division I school).
– Larrañaga now has 350 league wins in his 34 seasons as a Division I head coach, tallying an overall mark of 350-236.
– For the first time this season, Miami used a starting lineup of Lykes, McGusty, Wong, redshirt senior forward Keith Stone and senior guard Dejan Vasiljevic, marking the first time in 2019-20 that group even took the court together at any point.
– As announced prior to tip-off, redshirt junior forward Sam Waardenburg, after starting the first 23 affairs of the season, missed the game due to an injury sustained in Tuesday’s practice.
– Six of Miami’s 10 active scholarship players have missed at least one game due to injury this year, including four of the five primary starters, with the six individuals combining to sit out 39 total contests.
– Miami is now 12-0 when leading or tied at halftime and 0-12 when trailing through 20 minutes this season.
– The last time Miami won an ACC game by 25-plus points was Jan. 14, 2016, when it posted a 72-46 victory at Pittsburgh.
– This marked the sixth time in 2019-20 the Hurricanes have held an opponent under 40 percent shooting and Miami is now 5-1 in such games.
– The only game this season in which Miami posted a better field goal percentage was Dec. 2, 2019, at Illinois, when it tallied a 59.3 percent clip.
– Miami’s 60.0 percent mark (15-of-25) from the floor after the break was its second-best in a half this season, trailing only the 66.7 percent ledger it posted in the first half at Illinois.
– In the first half, Boston College logged the third-lowest field goal percentage by a Miami opponent in a half this season and the fourth total mark under 30 percent, including just the second in ACC play along with Pittsburgh (29.6 percent, Jan. 12, first half).
– The Eagles became just the third team to hit only one 3-pointer in a half against Miami this year, joining then-No. 13/11 Louisville (Jan. 7, second half) and Pittsburgh (Jan. 12, first half).
– Boston College’s only larger loss this season was Dec. 31, 2019, at then-second-ranked Duke in a 39-point setback, 88-49.
– With one made 3-pointer in the game, Vasiljevic now has 258 in his career, tying Georgia Tech’s Travis Best and Anthony Morrow for No. 25 in ACC history.
– Wong notched double-digit points for the sixth game in a row, all of which he has started, after not reaching that figure in the first 18 affairs of his career.
– In addition, Wong surpassed both 150 points and 50 free-throw attempts.
– Barnes, the last Miami freshman with back-to-back 20-point games in non-overtime games, did so Jan. 16 and Jan. 20, 2001, in victories at Providence and over No. 15 UConn.
– With Beverly tallying 20 points in the game before Wong’s back-to-back stretch, this is the first time any Miami freshmen have combined to log three straight 20-point outings since Barnes’ back-to-back affairs were followed by Darius Rice hitting that mark Jan. 22, 2001, in an overtime loss at St. John’s.
– Beverly, who eclipsed both 500 minutes played and 50 rebounds in his young career, registered five-plus assists for a team-leading fourth time this season.
– Lykes recorded double-figure points for the 59th time, including the first since Jan. 18 after missing four of the past five games with a groin injury.
– Lykes moved past Guillermo Diaz for fifth place on Miami’s ACC-only career made field goals list, now owning 214.
– McGusty posted his 44th double-digit point total, including his first since Jan. 21 after missing three of the last five outings due to back spasms.
– Miller, who moved past 200 points at Miami, recorded his ninth double-figure scoring performance, including his sixth in the past nine games.
– Freshman forward Anthony Walker scored nine points, tied for his second-most this season, on 4-of-7 shooting to match his top mark in makes.
– Stone, who earned his first home start with the Hurricanes, eclipsed 1,750 minutes played as a collegian.