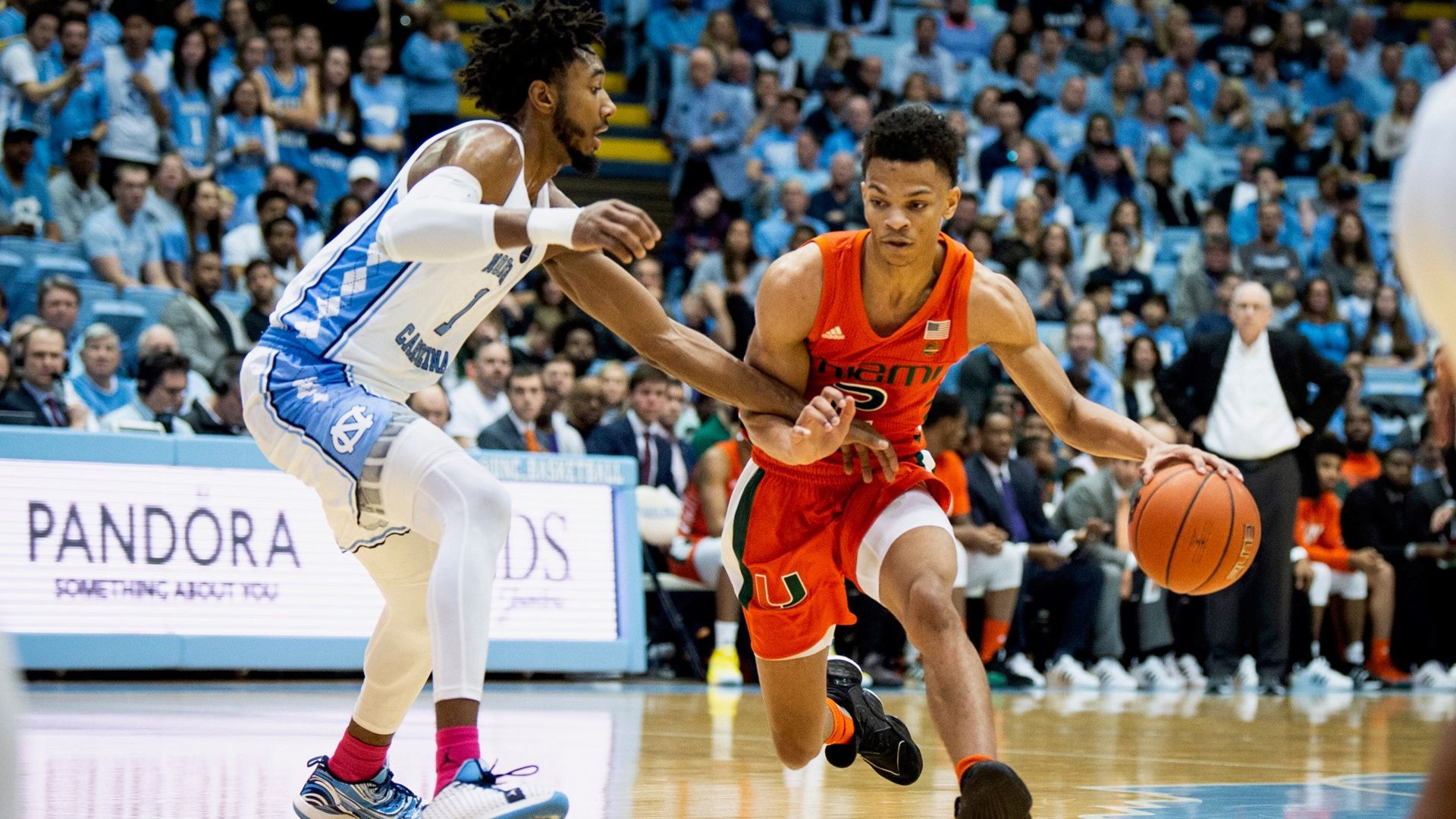 “Carolina had a great day. Getting [Brandon] Robinson back was a huge boost for them,” Miami head coach Jim Larrañaga said. “He had a career high; he shot the ball extremely well. Once he started shooting it well, that opened it up for the other guys and we just had a very hard time guarding them.”

The Tar Heels finished the first half shooting 55.0 percent (22-of-40) overall and 42.9 percent (6-of-14) from 3-point range, en route to a 51-27 edge at the break. It marked the most points Miami has allowed in a half this season and matched its largest deficit through 20 minutes.

North Carolina continued its blistering 3-point shooting in to the second half, while the Hurricanes struggled to get going from long range. The Tar Heels made nine of their first 18 3-pointers, while Miami hit just two of its first 18.

At the final buzzer, North Carolina had a 10-of-23 (43.5 percent) clip from beyond the arc and finished with the second-most points the Hurricanes have allowed in a game this year.

Wong’s 19 points, 11 above his prior career high set in Miami’s last game, came on 6-of-11 shooting overall, a 2-of-6 clip from beyond the arc and a 5-of-5 ledger from the line. All of those marks, except free-throw attempts, also set new top marks, as did his 35 minutes. In addition, his team-high three assists and one blocked shot tied his best tallies.

Freshman forward Anthony Walker scored 14 points in 25 minutes on 4-of-8 shooting from the floor and 5-of-5 shooting at the line, all of which set career highs. Redshirt junior center Rodney Miller, Jr., posted 13 points on 6-of-8 shooting, tying his career mark for makes.

“You have to learn a whole new system and how to take advantage of what you did in high school, but do it within our system,” Larrañaga said of Wong and Walker. “They were able to score points and get baskets, but part of that was because there were so many possessions and North Carolina was up 30 points.”

Robinson, a senior guard, led all scorers with a career-high 29 points, the most Miami has allowed to an opposing player this season. He shot 11-of-15 from the floor, 6-of-10 from deep and scored 27 of his points in the first 25:20 of action.

MIAMI HURRICANES POSTGAME NOTES
– The Hurricanes moved to 8-25 all-time against North Carolina, including 4-12 on the road and 6-9 in Larrañaga’s tenure.
– Miami has dropped its last four games against the Tar Heels after winning six of the prior nine matchups.
– Larrañaga, who entered the game with the 10th-most victories of any active Division I coach, is now 655-440 in 36 years as a head coach, including 185-106 in nine seasons at Miami.
– As announced prior to the game, Lykes (groin injury) and McGusty (back spasms), who are averaging a combined 30.2 points per game, did not play.
– Lykes entered Saturday having played in all 82 games of his career and starting each of the past 52 contests, dating back to 2017-18.
– After being the lone team in the ACC to use the same starting five in every game this season through its first 18 outings, Miami Saturday used an opening lineup of Miller, Wong, freshman guard Harlond Beverly, senior guard Dejan Vasiljevic and redshirt junior forward Sam Waardenburg.
– This marked the first start in the young careers of both Beverly and Wong, who entered the day averaging a combined 8.6 points and 31.0 minutes per game.
– Of Miami’s 10 active scholarship players, four missed Saturday’s contest due to injury.
– Miami is now 10-0 when leading or tied at halftime and 0-9 when trailing through 20 minutes this season.
– The Hurricanes’ 94.4 percent clip from the line was its best since going 7-of-7 at North Carolina on Feb. 9, 2019, and its first time eclipsing 90 percent on 10-plus attempts since a 92.3 percent mark (12-of-13) on Feb. 27, 2018, also in Chapel Hill.
– North Carolina’s 32 assists were nine more than Miami has allowed in any prior game in 2019-20.
– Along with scoring the most points, Robinson had the most made 3-pointers and tied the top total for made field goals the Hurricanes have conceded to an opposing player in a game this year.
– Robinson also became just the third opposing player, including the first who does not play for Duke, to log 15-plus points in the first half against Miami.
– Wong’s 19 points were the most by a Miami freshman since Lonnie Walker IV totaled the same amount on Feb. 19, 2018, against Notre Dame.
– Additionally, Wong moved past 250 minutes played in his career.
– Beverly played a career-high 34 minutes and tied for his most points in an ACC outing with nine.
– Miller, who reached 50 free-throw attempts as a collegian, posted his sixth double-digit point total, all of which have come this season, including his third in the last four games.
– Walker, who recorded his first double-figure point total, eclipsed 50 points in his career.
– Vasiljevic became the fourth Hurricane to reach 250 made 3-pointers and passed Sheldon McClellan for No. 10 on Miami’s ACC-only scoring list, now with 540 points.
– Junior guard Willie Herenton logged his first points of the season on a 3-pointer with 5:35 remaining in the game.
– Herenton finished with career highs in points (six), made field goals (two), rebounds (two) and minutes (10), plus recorded his first assist.
– Freshman guard Filippos Gkogkos played a career-best six minutes, registering his first two collegiate shot attempts and first steal.