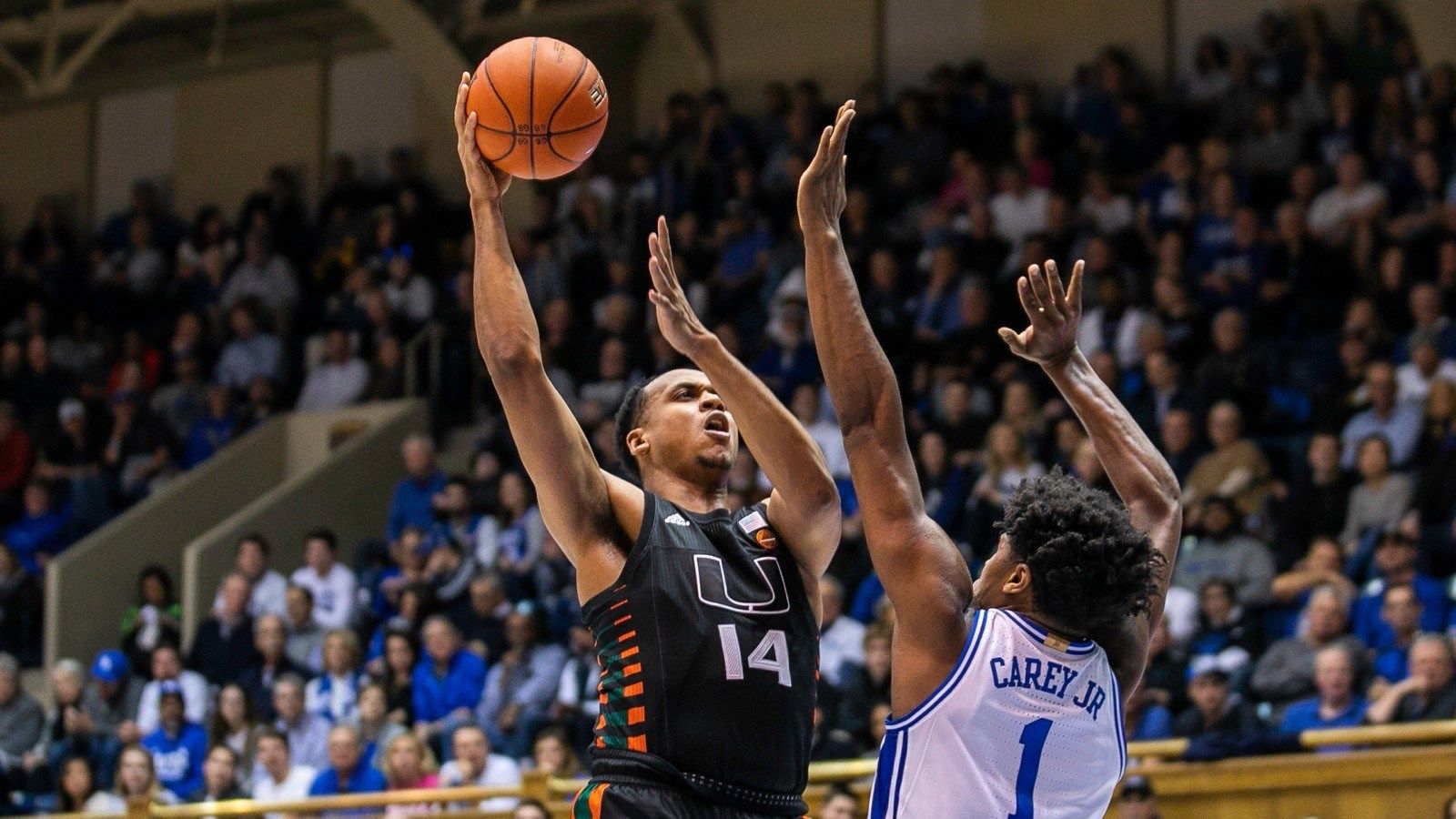 DURHAM, N.C. – The University of Miami men’s basketball team dropped an 89-59 decision Tuesday night on the road against eighth-ranked Duke.

Redshirt junior center Rodney Miller, Jr., led the way for Miami (10-8, 2-6 ACC) with 13 points and a career-best 13 rebounds in the defeat at Cameron Indoor Stadium.

“What we told the team, and what the game plan was, was to try and force them to beat us from the outside—and they did,” Miami head coach Jim Larrañaga said. “They made nine threes in the first half.”

The Blue Devils eventually took a 48-24 edge into the intermission, with freshman forward Matthew Hurt notching 15 points for the home team. Duke shot 9-of-17 (52.9 percent) from long range in the opening session, the first team to make eight-plus 3-pointers in a half against Miami in 2019-20.

Although the Hurricanes improved on the offensive end after the break, they were unable to slow down the Blue Devils enough to claw back from their largest halftime deficit this year.

In addition to logging his first double-double, Miller went 5-of-6 at the line, setting a career high in makes and tying his top mark in attempts. His 13 rebounds were two more than the prior top mark by a Hurricane this season.

Redshirt junior guard Kameron McGusty also finished with 13 points, connecting on all six of his free throws to set a season high in makes and match his season best in attempts. Senior guard Dejan Vasiljevic added 12 points for Miami.

“We are a team that has been very beat up. We couldn’t practice Sunday or Monday,” Larrañaga said. “Chris Lykes and Kam McGusty fought through it and played tonight. On Sunday, my athletic trainer told me they [might not be able to] play on Tuesday. Their bodies were so beat up . . . but instead they gutted it out. They didn’t play great, but at least they were able to play hard and hopefully, with a little more rest, they will be ready to go on Saturday.”

The Hurricanes will head back to the Tar Heel State for their next game, as they are set to square off with North Carolina Saturday at noon at the Dean E. Smith Center in Chapel Hill, N.C., live on ESPN2.

MIAMI HURRICANES POSTGAME NOTES
– The Hurricanes moved to 7-22 all-time against Duke, including 2-11 on the road and 5-7 in Larrañaga’s tenure.
– Miami has dropped its last four games against the Blue Devils after winning five of its first eight under Coach L.
– Larrañaga, who entered the game with the 10th-most victories of any active Division I coach, is now 655-439 in 36 years as a head coach, including 185-105 in nine seasons at Miami.
– For the 18th time in as many games this season, Miami used a starting lineup of Lykes, a junior guard, McGusty, Miller, Vasiljevic, and redshirt junior forward Sam Waardenburg.
– Miami is now 10-0 when leading or tied at halftime and 0-8 when trailing through 20 minutes this season.
– After playing five of its first eight ACC games against teams currently ranked in the top eight nationally, Miami has just one ranked team on its schedule the rest of the season.
– Duke was the fourth top-15 team, including the third top-10 foe, Miami has faced in a six-game, 18-day stretch.
– The Hurricanes recorded first-half season lows in points and field goal percentage (29.6), the former their lowest mark in any half.
– In the opening 20 minutes, Miami also tied its season low in first-half made 3-pointers (one) and recorded zero blocks in a session, either one, for just the fourth time.
– Miami has allowed 48-plus points in a half three times, with two of them coming in the first half against Duke.
– The Blue Devils have the only two players, Hurt and freshman guard Cassius Stanley (16 in the first meeting), to log at least 15 points in the first half against the Hurricanes this year.
– Miller is the fourth Hurricane to record a double-double this season, joining McGusty (two), Vasiljevic and Waardenburg.
– Miller’s seven first-half rebounds were the most he has recorded in a half in his career
– In addition, Miller moved past 150 points as a Hurricane and registered his fifth double-digit scoring performance, all of which have come in 2019-20.
– Lykes, who eclipsed 1,100 points at Miami, passed Davon Reed for sole possession of second place on Miami’s ACC-only 3-pointers made list with 118.
– McGusty, who surpassed 850 points and reached 100 made 3-pointers as a collegian, notched his 43rd double-figure scoring performance.
– Vasiljevic registered his 57th double-digit scoring total.
– Freshman guard Isaiah Wong scored a career-high eight points and surpassed 50 total in his young career.
– Freshman forward Anthony Walker played a career-high 24 minutes, matching his total in the prior six games combined.