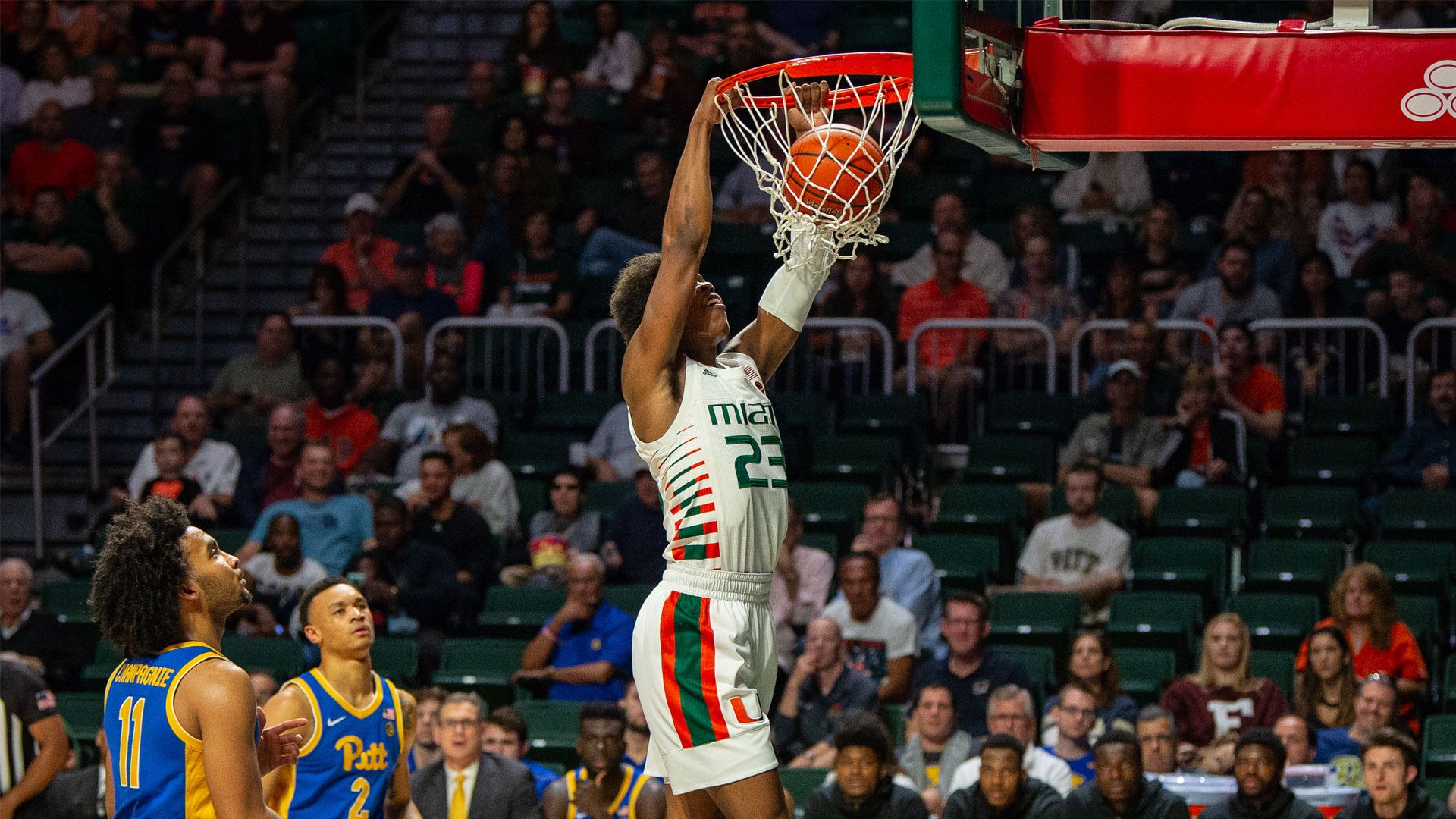 Redshirt junior guard Kameron McGusty scored a game-high 19 points on 8-of-12 shooting for Miami (10-5, 2-3 ACC), which held the lead for over 39 minutes and never trailed.

The Hurricanes jumped out to a 16-0 lead in under six minutes, connecting on 6-of-9 shots, while Pittsburgh (11-5, 2-3 ACC) missed its first seven. Miami held the Panthers without a point for the opening 6:12 and without a field goal for the first 6:53.

“Our practice and preparation with very little time to prepare—our guys did a really good job of recognizing what we needed to do,” Miami head coach Jim Larrañaga said of the strong start. “[That is] partially because they play similarly to us. They do a lot of ball screens and our guys are used to guarding that in practice.”

The Panthers, however, made their next six shots to counter with an 18-2 burst in under five minutes, quickly leveling the score at 18 with 9:25 left in the half. Miami then returned to form defensively, limiting the Panthers to 2-of-14 shooting the rest of the half, including another 0-of-7 stretch, and took a 31-22 edge into the locker room.

The Hurricanes opened the second half in similar fashion to the first, scoring 15 of the opening 19 points to go up by 20, 46-26, with 13:59 to go. Once again, though, Pittsburgh responded, this time logging a 17-3 run, including an 11-0 spurt to cap it, to make it 49-43 with 8:09 remaining. That also marked the time at which junior guard Chris Lykes fouled out, the first disqualification of his career.

The Panthers pulled within four on four occasions, but Miami never let it become a one-possession game, even stretching its lead back to 10 with 1:09 left before finishing with an eight-point decision.

“I’m particularly happy with Harlond Beverly, his ability to help us at the end when Chris Lykes fouled out,” Larrañaga said. “You have to have someone step up and he’s the backup point guard. Not only did he play well, but he made some critical plays that sealed the victory.”

Beverly, a freshman guard, had four points and three of his team-high five assists in the final five minutes of the game.

Senior guard Dejan Vasiljevic played all 40 minutes and totaled 13 points, while Lykes had 12 in just 19 minutes, his lowest total in the latter since playing 18 on Feb. 19, 2018, at Notre Dame. Redshirt junior forward Sam Waardenburg had seven points and a team-high 10 rebounds in a career-high-tying 40 minutes.

Up next for Miami is a trip to NC State, as it is set to take on the Wolfpack Wednesday at 7 p.m. at PNC Arena in Raleigh, N.C., live on RSN.

MIAMI HURRICANES POSTGAME NOTES
– The Hurricanes moved to 23-18 all-time against Pittsburgh, including 14-7 at home and 7-1 in Larrañaga’s tenure.
– Miami’s seven-game winning streak against the Panthers’ is its longest active mark against any ACC team.
– Larrañaga, who entered the game with the 10th-most victories of any active Division I coach, is now 655-436 in 36 years as a head coach, including 185-102 in nine seasons at Miami.
– This victory gives Coach L 50 ACC home wins in his Miami tenure, compared to just 24 defeats.
– For the 15th time in as many games this season, Miami used a starting lineup of Lykes, McGusty, Vasiljevic, Waardenburg and redshirt junior center Rodney Miller, Jr.
– Miami is now 10-0 when leading or tied at halftime and 0-5 when trailing through 20 minutes this season.
– Before Vasiljevic and Waardenburg did so Sunday, the last time a Hurricane played every minute of a game was Jan. 3, 2015, when Sheldon McClellan played all 50 minutes in a double overtime loss at third-ranked Virginia.
– This marked the first time all season Miami has used just seven players in a game.
– Miami last shot 50-plus percent in both halves of an ACC game on Feb. 27, 2018, in a win at ninth-ranked North Carolina.
– The Panthers’ 29.6 percent mark from the field and 22 points in the first half were both the second-lowest totals by a Miami foe in a half this season, behind just the 22.6 percent ledger and 20 points posted by Coppin State before the break Dec. 21.
– McGusty’s 15 points in the first half were the fifth-most in a session by a Miami player in 2019-20, including the second-most before the intermission.
– McGusty, who surpassed 300 made field goals as a collegian, recorded his 41st double-digit scoring performance.
– Lykes, who eclipsed 1,050 points and 350 made field goals at Miami, registered his 56th double-figure point total despite having his 51-game streak of playing 20-plus minutes snapped.
– Lykes passed Robert Hite for No. 10 on Miami’s ACC-only made field goals list, now owning 188 in his career.
– In addition, Lykes passed Sheldon McClellan and tied Guillermo Diaz for fifth place on Miami’s ACC-only free-throw attempts list, now with 171 as a collegian.
– Vasiljevic, who registered double-digit points for the 54th time, passed three Hurricanes to move from No. 12 to ninth on Miami’s ACC-only minutes list, now with 1,420.
– Waardenburg, who logged his fourth double-figure rebounding total, moved past 1,500 minutes played as a Hurricane.
– Beverly, who notched his second five-assist outing, surpassed both 100 points and 250 minutes played in his young career.
– The last time a Miami freshman had five-plus assists in an ACC contest was Lykes on Jan. 31, 2018, also against Pittsburgh.
– Miller set a career high with 36 minutes of action, four above his prior top mark.