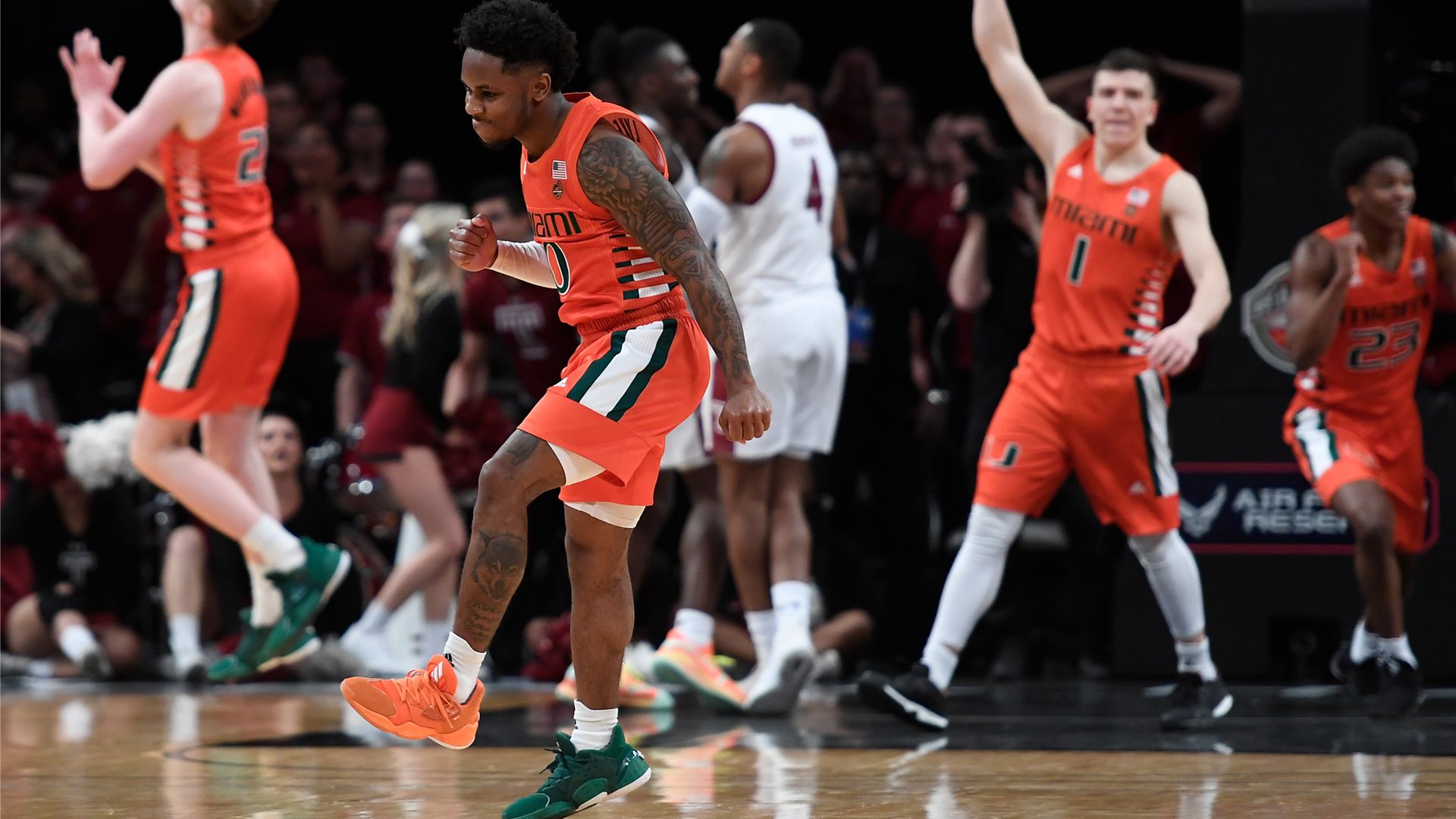 Canes Cruising Ahead of Duke Matchup

CORAL GABLES, Fla. – It was, for the Hurricanes, a perfect December.

It started with a gritty two-point victory at Illinois. Then came a high-scoring effort against Alabama A&M that featured five different players finishing in double figures. There was the hard-fought neutral-site thriller against Temple. A record-breaking 3-point shooting performance against Coppin State. And just this week, an overtime showdown at Clemson.

Now, with a tough stretch set to begin Saturday night at the Watsco Center when second-ranked Duke comes calling, Miami coach Jim Larrañaga says it’s time to see how his team has grown since its November opener against Louisville when it last faced a ranked opponent.

“I was very, very pleased that in the month of December we won all our games. That’s hard to do in any month, but particularly with the schedule we had and a number of road games against very good teams at Illinois, at Clemson and at a neutral site against Temple,” Larrañaga said. “Our home games, I thought we played pretty well. But if you look at our January schedule, I don’t think there’s a team in the country that compares with the level of difficulty that we’re going to face starting [Saturday] night against Duke. …

“It’s great to win close games and I do think that gives you confidence, but now the question is how well can we play against some of the best teams in the country?”

As the Hurricanes try to answer that question Saturday against Duke and again Tuesday at No. 7 Louisville, Miami will rely on a trio of backcourt veterans, all of whom are averaging 15 points.

Junior Chris Lykes, senior Dejan Vasiljevic and redshirt junior Kameron McGusty have all put up impressive performances over the course of the last month, with both Lykes and Vasiljevic scoring the 1,000th points of their Miami careers in recent weeks. McGusty, meanwhile, earned recognition as the co-ACC Player of the Week after averaging 20 points, 7.5 rebounds and 2.5 steals in the wins over Temple and Coppin State.

Also contributing significantly during Miami’s run has been redshirt senior forward Keith Stone, who has been working his way into the rotation after recovering from the season-ending ACL injury he suffered last January, along with fellow big men Sam Waardenburg and Rodney Miller.

“I really like what our veterans have done. When I see Chris Lykes, DJ Vasiljevic, Kam McGusty, Sam Waardenburg, Rodney Miller and Keith Stone, those older guys, I love the way they play together,” Larrañaga said. “Chris, DJ and Kam are really bringing out the best in each other. … We’re the only team in the country that has three guards averaging 15 points per game or more, that’s great balance in your backcourt.”

As well as Miami’s veterans have played, though, the Hurricanes (9-3, 1-1 ACC) know they face a test.

Since being upset by Stephen F. Austin in late November, the Blue Devils (12-1, 2-0) have won six straight.

Freshman standout Vernon Carey Jr. – the son of former Hurricanes and Dolphins offensive tackle Vernon Carey – has posted eight double-doubles this season, with all eight being 15-point, 10-rebound efforts. And in his first year in the ultra-competitive ACC, Carey already leads the league in field goal percentage (.613), is third in scoring (17.9 ppg) and is third in rebounding (9.0).

In his return to South Florida, Carey Jr. will be joined by a trio of teammates all averaging double figures including Tre Jones (14.6 ppg), Matthew Hurt (11.5 ppg) and Cassius Stanley (10.3 ppg).

It’s not just on offense, though, where Duke excels.

The Blue Devils are ranked third nationally in defensive efficiency and in the month of December, they allowed an average of just 58.6 points per game.

All are challenging numbers, but, the Hurricanes say they’re ready to see how they match up.

“They play with a lot of heart. I think Tre Jones leads that team just with the emotion he plays with,” Vasiljevic said. “They’ve been playing really well. I think they’re 12-1 now and they’re having a great season. I’m looking forward to the challenge come Saturday. … I think we’re all excited. It’s ESPN, prime-time, 8 o’clock. We look forward to these games. I think we’ll be really energetic and ready to play.”