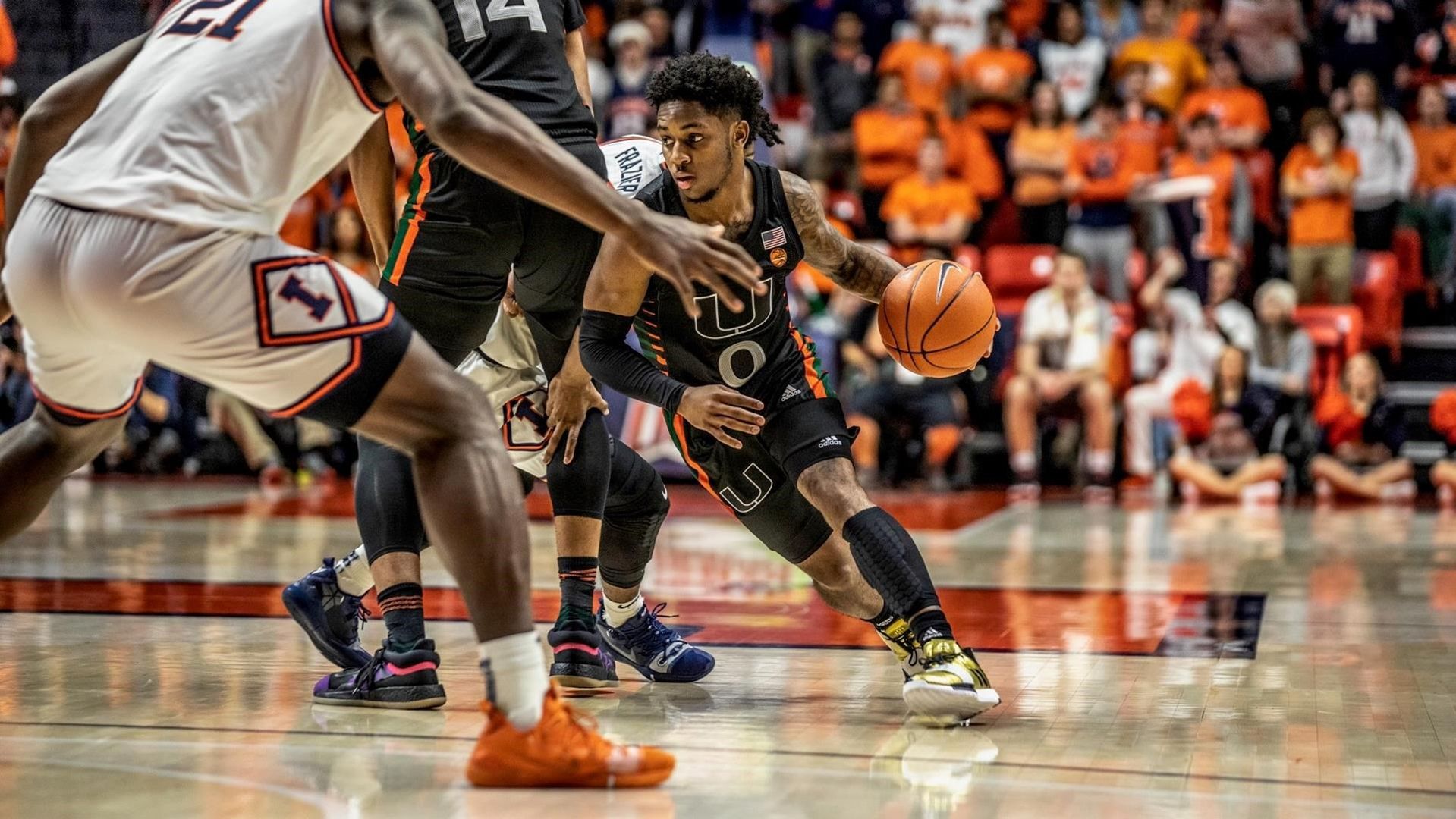 CHAMPAIGN, Ill. – Behind a scintillating first-half shooting performance, the University of Miami men’s basketball team picked up an 81-79 victory Monday night at Illinois.

The triumph was Miami’s third straight on the road in Big Ten/ACC Challenge competition and gave head coach Jim Larrañaga 650 total wins in his stellar career.

“Winning on the road is very difficult, but getting out in front and playing as well as we did in the first half really gave us a chance,” Larrañaga said. “I have got a lot of respect for the job Illinois did, and their players in making a great comeback, but we were able to keep our poise down the stretch and win the game.”

After missing their first two shots, the Hurricanes fully controlled the remainder of the first half. Miami connected on 18 of its next 21 attempts from the floor, hitting 10 in a row and making 6-of-7 shots from 3-point range, to take a commanding 27-point edge, 45-18, with 4:33 on the clock.

Lykes scored 18 points on 7-of-9 shooting in the half, tying his season high for a full game and setting a new career high for points before the break. Redshirt junior forward Sam Waardenburg also set a new season high in the first half alone, notching 10 points on 4-of-5 shooting.

Overall, Miami shot 20-of-30 (66.7 percent) in the first half, including 6-of-12 (50.0 percent) from beyond the arc. The Hurricanes also scored 17 points off Illinois’ 10 turnovers, while the Fighting Illini had four points on Miami’s four turnovers.

“I think our players were very focused; we had a great week of practice,” Larrañaga said. “I thought Chris Lykes, DJ Vasiljevic and Kameron McGusty, our starting back court, were very sharp in their decision-making, whether to shoot or pass, and they were very, very aggressive. At the same time, we were also very aggressive on the defensive end of the floor, limiting them to one shot.”

Lykes, however, drew a charge with 2.7 seconds left on Illinois’ next possession and then connected on the first of two free throw with 1.8 ticks left and the Illini missed a half-court heave, sealing the Miami win.

Along with tying his career high in points, Lykes set a new career high in made field goals, finishing 11-of-17 after starting 9-of-11. The Mitchellville, Md., native also logged a career- and game-best four steals.

Vasiljevic’s 20-point outing featured a career-high-tying six made 3-pointers on just nine attempts in a game-leading 37 minutes. McGusty, a redshirt junior guard, scored 13 points, while Waardenburg finished with 12 points and a co-game-high eight rebounds, the former two shy of his career high.

Redshirt senior forward Keith Stone also made his Miami debut in the victory, playing for the first time in 317 days after rehabbing from a right knee injury he suffered while playing for Florida at Georgia on Jan. 19. The Deerfield Beach, Fla., native recorded two points and three rebounds in 15 minutes.

Freshman center Kofi Cockburn paced Illinois with 23 points, finishing 8-of-8 from the floor and 7-of-8 at the line. Junior guard Trent Frazier notched 14 points, while sophomore guard Ayo Dosunmu totaled 12 and senior guard Andres Feliz had 11.

In addition, the Hurricanes shot over 50.0 percent in both halves for the first time since Dec. 29, 2018, when they did so against Campbell.

With the win, Larrañaga became just the 18th active coach to reach 650 career victories, including the 10th at the Division I level.

“This is really about a team accomplishment, not just this year’s team, but all of the years that I have coached,” Larrañaga said. “[I have had] the opportunity and the privilege to coach a lot of terrific players who have helped us win a lot of games.

After 11 days without a game, the Hurricanes will return to action Dec. 14, when they host Alabama A&M at 2 p.m. at the Watsco Center, live on ACC Network.

MIAMI HURRICANES POSTGAME NOTES
– The Hurricanes are now 3-1 all-time against Illinois, including 1-0 on the road and 3-0 in Larrañaga’s tenure.
– Miami improved to 7-6 in Big Ten/ACC Challenge action, including 3-4 on the road, 6-3 under Coach L and 5-1 in the past six years.
– Larrañaga, who entered the game with the 10th-most victories of any active Division I coach, is now 650-434 in 36 years as a head coach, including 180-100 in nine seasons at Miami.
– Larrañaga is the 64th NCAA coach all-time to record 650 victories in a career, including the 39th with Division I experience, the 38th with at least 10 years at a Division I school.
– With the victory, Larrañaga passed Cliff Ellis for sole possession of the No. 20 spot on the all-time wins list by an ACC coach while in the league (180).
– After going 0-10 in true road games during the 2018-19 season, the Hurricanes are 2-0 in such contests this year.
– The Hurricanes have opened December with a victory in 15 of the past 17 seasons, including 10 of the last 11.
– For the eighth time in as many games this season, Miami used a starting lineup of Lykes, McGusty, Vasiljevic, Waardenburg and redshirt junior center Rodney Miller, Jr.
– The last time two Hurricanes scored 20-plus points in a game was March 12, 2019, in the ACC Tournament in Charlotte, N.C, when Vasiljevic had 21 and Anthony Lawrence II had 20.
– Lykes’ 18 points in the first half were one shy of his most in any half, just behind the 19 he scored against Bethune-Cookman (Nov. 17, 2018) and Wake Forest (Jan. 12, 2019) last season.
– The Hurricanes’ 20 made field goals in the first half tied for the ninth-most in a session since joining the ACC in 2004-05 and tied for the fifth-most in the first half.
– Miami reached 50 points in a half for the second time this season, as well as tallied 50 before the break for the first time since Nov. 13, 2018, against Stephen F. Austin.
– The last time Miami scored 50 points in a half against power conference opponent was Feb. 7, 2018, when it notched 52 versus Wake Forest.
– The Hurricanes’ 19-point edge at the half was their largest since leading La Salle by 31 points, 49-18, on Nov. 22, 2018, in Fullerton, Calif., as well as its largest versus a power conference team since holding a 24-point advantage, 59-35, over Mississippi State on Nov. 19, 2015, in San Juan, P.R.
– The last time Miami shot 60-plus percent in a half was Nov. 25, 2018, versus Seton Hall, also in Fullerton, when it posted an equal 66.7 percent mark (16-of-24).
– The Hurricanes’ first half featured a stretch of 15:45 during which it went 19-of-23 (82.6 percent) and within that was an 18-of-21 (85.7 percent) span in 14:02, a 14-of-15 (93.3 percent) stretch in 9:31 and a 10-of-10 (100 percent) span in 6:07.
– Miami’s 6-of-7 (85.7 percent) 3-point spurt in the first half came in 12:16 timeframe that featured four straight makes in 3:38 and two others in 30 seconds.
– Illinois shot 17-of-28 (60.7 percent) in the second half, becoming the first team to shoot 60-plus percent in a half against the Hurricanes since Feb. 9, 2019, when eighth-ranked North Carolina went 16-of-25 (64.0 percent) in the second stanza.
– Over its last 180 minutes of action—the past four full games and the first half of the prior one—Miami is shooting 41-of-84 (48.8 percent) from 3-point range.
– In his 72nd appearance as a Hurricane, Lykes made his 50th start, surpassed 250 free-throw attempts, logged his 50th double-figure scoring output and totaled his 11th 20-point showing.
– McGusty posted his 34th double-figure point total and eclipsed 250 made field goals in his career.
– Vasiljevic registered his 48th double-digit point total and eighth 20-point performance as a collegian.
– Vasiljevic tied Malcolm Grant for fifth place on Miami’s all-time made 3-pointers list with 223 and passed Grant for sole possession of fifth place on the attempts list with 580.
– Waardenburg notched his eighth-career double-digit point total and tied his career high in made field goals (four).
– Freshman guard Isaiah Wong surpassed 100 minutes played in his young career.
– As announced prior to the game, redshirt sophomore forward Deng Gak will miss the remainder of the season with a right knee injury sustained in practice.