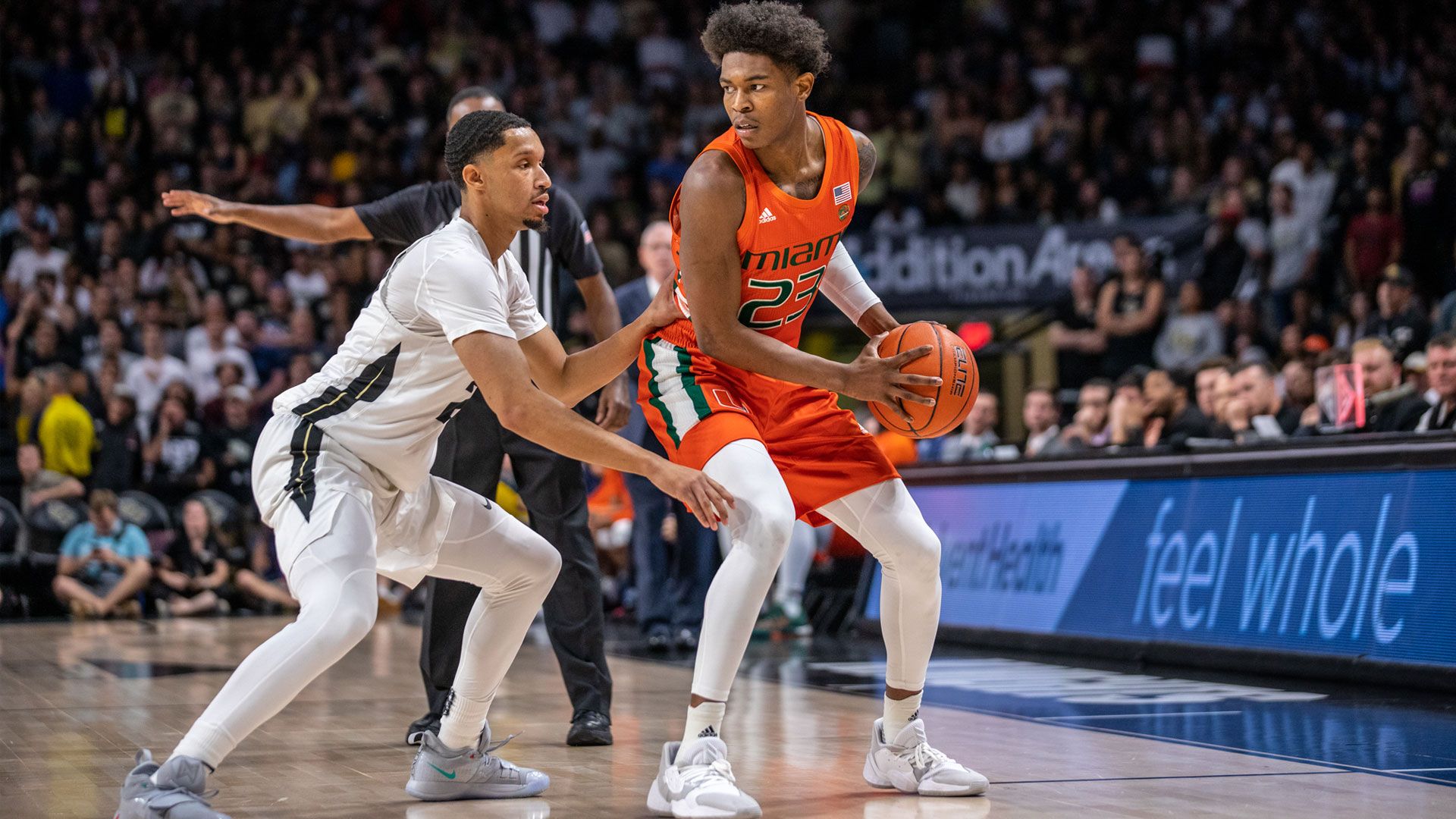 ORLANDO, Fla. – The University of Miami men’s basketball team earned a 79-70 win Tuesday night at UCF in its first road game of the season.

Buoyed by a game-best 17 points and a career-high 10 rebounds from redshirt junior guard Kameron McGusty, who posted his first collegiate double-double, Miami (2-1, 0-1 ACC) led for over 34 minutes at Addition Financial Arena.

“Well, he got himself off to a great start,” Miami head coach Jim Larrañaga said of McGusty. “We ran a set play for him on the first two possessions and he scored on both of them. Then he got himself to the foul line and made some free throws. He was able to just keep that aggressiveness throughout the game and when he is playing like that he is hard to handle.”

McGusty, however, scored the final four points of the half, including a buzzer-beating jump-shot after a steal near midcourt. The back-to-back baskets put the Hurricanes ahead by one, 30-29, at the break despite shooting 12-of-31 (38.7 percent) from the floor, including 2-of-13 (15.4 percent) beyond the arc.

The Hurricanes extended their advantage to as many as 15 points, 68-53, and the Knights never got any closer than eight the rest of the way. A layup in the closing seconds brought the final margin down to single digits.

“Winning on the road is the most difficult thing you can do and we were not able to do it a single time last season,” Larrañaga said. “Now, with a little deeper team—we played nine guys tonight—we were able to get a road win in our very first road game. So, I think that is a confidence builder for us.”

Three Hurricanes joined McGusty in double figures, including senior guard Dejan Vasiljevic notching 16 points on 6-of-12 shooting to go along with four rebounds and four assists.

Freshman guard Harlond Beverly scored a career-high 15 points on 6-of-11 shooting, adding four assists to co-lead the team alongside Vasiljevic. Junior guard Chris Lykes finished with 11 points and went 6-of-7 from the stripe.

Miami will now return home to the Watsco Center, where it squares off with Quinnipiac Saturday at 2 p.m., live on ACC Network Extra.

MIAMI HURRICANES POSTGAME NOTES
– Miami improved to 8-2 all-time against UCF, including 4-0 on the road and 2-1 in Larrañaga’s tenure.
– Since the program’s rebirth in 1985-86, Miami is now 82-7 against Florida’s 10 non-Power Five schools, including 14-2 under Larrañaga and 17-4 on the road.
– Larrañaga, who entered the evening with the 10th-most victories of any active Division I coach, is now 647-432 in 36 years as a head coach, including 177-98 in nine seasons at Miami.
– With 647 victories, Larrañaga is now tied with Gene Bartow and Rick Pitino for No. 39 on the all-time wins list (min. 10 years at a DI school).
– For the third time in as many games this season, Miami used a starting lineup of Lykes, McGusty, Vasiljevic, redshirt junior center Rodney Miller, Jr., and redshirt junior forward Sam Waardenburg.
– Tuesday’s victory was Miami’s first in a true road game since a 91-88 decision at ninth-ranked North Carolina on Feb. 27, 2018, snapping a 10-game skid.
– McGusty’s double-double was the first of the season by a Hurricane, with the most recent prior one coming March 12, 2019 by Anthony Lawrence II against Wake Forest in the ACC Tournament.
– In his 100th game as a Hurricane, Vasiljevic surpassed 900 points and registered his 44th double-digit scoring outing.
– McGusty, who tallied the 30th double-digit scoring game of his career, reached 75 made 3-pointers as a collegian.
– Lykes logged his 46th double-figure scoring game of his career, including his third in as many contests this year.
– Beverly reached double digits in the scoring column for the second time in his young career.
– UCF redshirt senior guard Dazon Ingram was ejected from the game with 6:11 to play after being issued a Flagrant 2 foul.