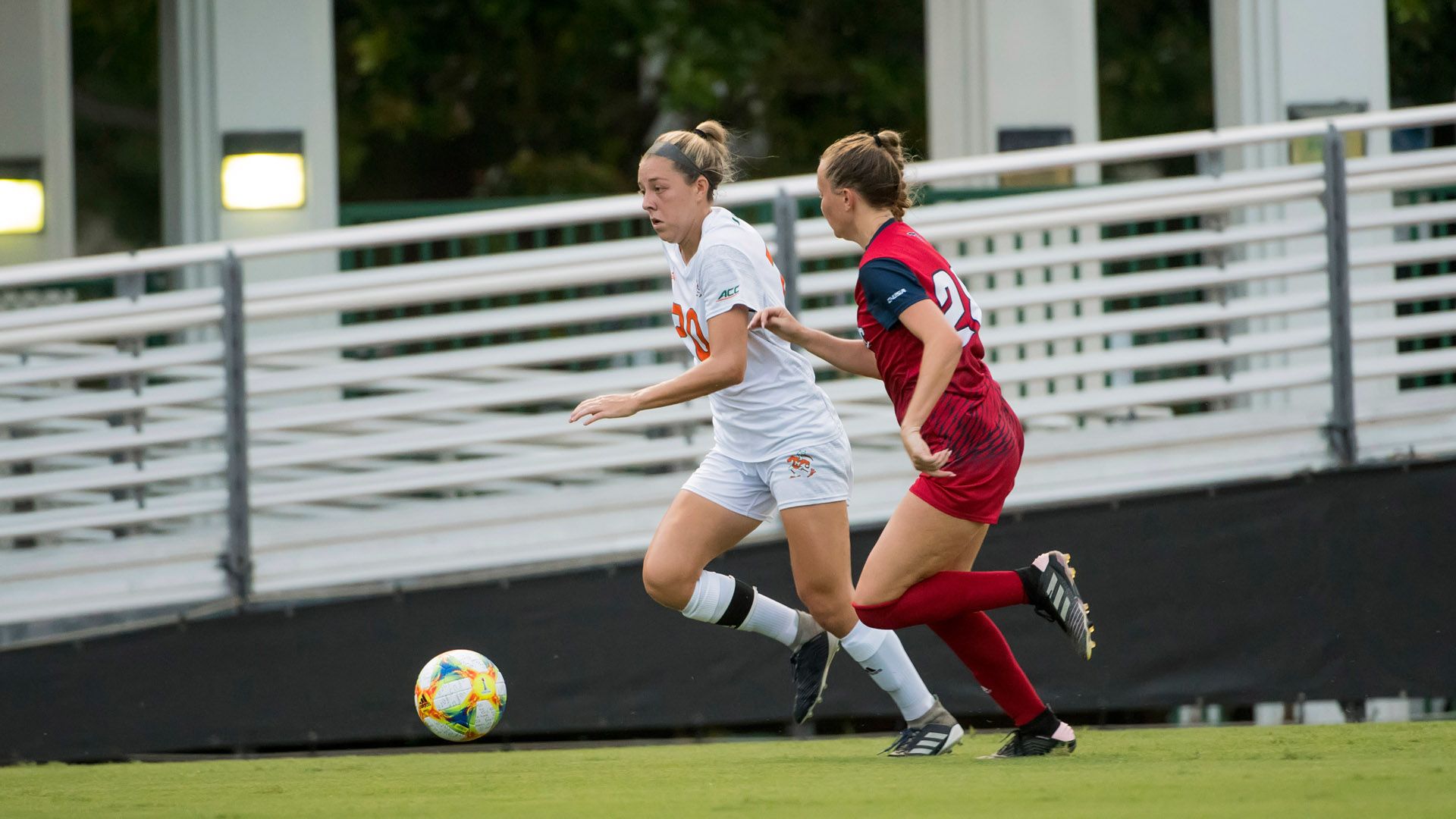 Miami Comes up Short against No. 12 Louisville, 1-0

CORAL GABLES, Fla. – An early goal makes the difference Sunday afternoon at Cobb Stadium, as the University of Miami soccer team dropped a hard-fought match against No. 12 Louisville, 1-0.

“I thought we just weren’t clinical enough in the attacking half, especially in the second half,” Miami head coach Sarah Barnes said. “We had the ball a lot, but I just thought our composure and decision making was a little bit off in terms of attacking the space they were giving us.”

Looking to take a hold of the match three minutes in, senior forward/defender Bayleigh Chaviers sent a through ball into space towards Kristina Fisher, who was able to get a shot off. However, Louisville’s goalkeeper Gabrielle Kouzelos was able to make the save.

Then in the fifth minute, Fisher returned the favor with a through ball towards Chaviers who went one-on-one with the goalie. However, again, Kouzelos was able to make the stop.

Receiving a breakaway of their own, the Cardinals’ Emina Ekic was able to finesse the ball into the back of the net, as Louisville jumped ahead 1-0 at the 5:33 minute mark.

Off a free kick in the 13th minute, Ekic sent a shot towards the bottom right post, but Miami’s goalkeeper, Tyler Speaks, made an incredible diving save to keep it a 1-0 match.

Knocking on the doorstep once again, Chaviers sprinted past the Louisville defense and was moments away from reaching the 18-yard box before getting tackled from behind by Niamh Nelson.

Receiving a red card on the play, Nelson was ejected from the match and set up a free kick opportunity for freshman midfielder Ine Ostmo at the 17:26 mark.

Sending a blast on net, Ostmo’s shot was barely denied by the Cardinals’ wall, as Louisville maintained its 1-0 lead.

In the 30th minute, Miami received another goal-scoring opportunity when Maria Jakobsdottir found space behind the Cardinal’s back four, but again Kouzelos was up for the challenge.

At the half, both team’s registered a trio of shots on goal.

Out of the break, playing a player down, Louisville parked the bus, hoping to deny a UM comeback.

Looking to even the match, Miami was unable to connect on any of its several crosses, as neither team registered a second half shot on goal.

The Hurricanes will return to the pitch on Saturday at 7:30 p.m. against third-ranked North Carolina. Prior to the match, a quintet of Miami seniors, Dejah Cason, Chaviers, Fisher, Lauren Markwith and Hannah Marwede will be honored for their commitment to The U over the past four seasons.

The match will be broadcast live on RSN.