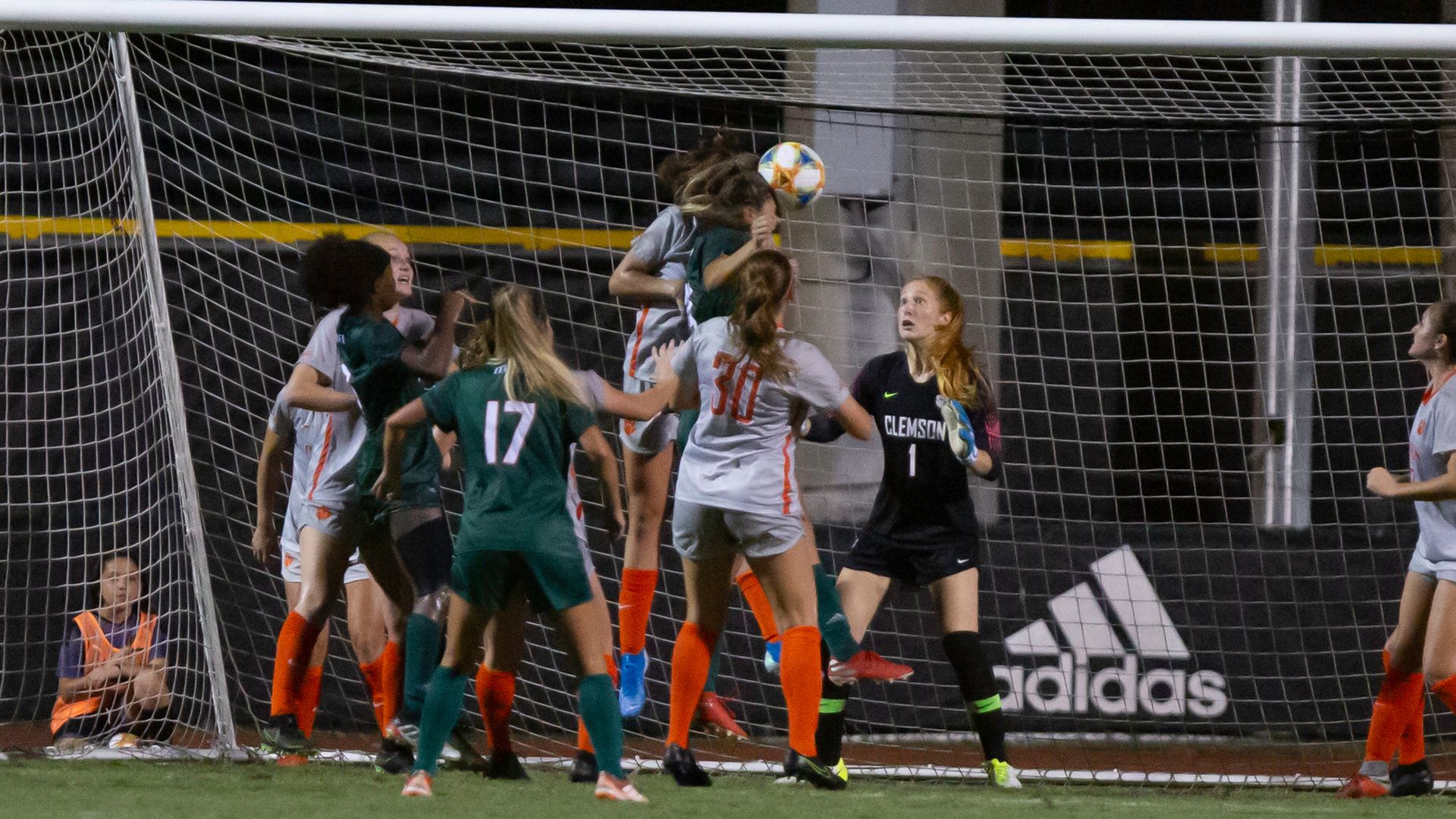 CORAL GABLES, Fla. – Just over 109 minutes into Thursday night’s nail-biting affair with No. 15 Clemson, Michelle Giamportone stepped up to the corner with ice in her veins.

Taking a breather, the junior stepped back from the ball, raised her arm in the air and watched her beautifully placed cross sail towards the top of the six-yard-box.

With time appearing to slow down for a moment, Selena Fortich jumped above the Tigers defense and immediately sent the home crowd in jubilation, as the University of Miami women’s soccer team secured the 3-2 triumph.

“It was a tough and gritty performance. I give the team a lot of credit, because they went down twice and came back both times,” Miami head coach Sarah Barnes said. “That is a hard thing to do, especially when going against a team ranked among the top-15. [Clemson has] a lot of experience [in those situations] and I thought the team did a good job of staying focused on what the job was they needed to do… This is a great jumping off point for us and we have to build on it. Every game this season, win or lose, we have always said, ‘We have to keep getting better.’ So, it is just taking the next step now.”

Looking to take an early lead, Tia Dupont sent a rocket from 20-yards out. However, the junior forward’s attempt just missed the target, banging off the top of the cross bar.

Despite the Tigers loaded shot total though the opening 38 minutes, it wasn’t until the final seven minutes where sophomore goalkeeper Tyler Speaks was truly put to the test.

38:17 into regulation, Clemson’s Caroline Conti sent a blast towards the cross bar, which Speaks was able to punch out of harm’s way.

Then in the 41st minute, Conti once again placed a beautifully placed ball on target that was heading for the bottom right corner of the net. However, making the extension, Speaks once again was able to knock away the goal-scoring opportunity.

Finally, with just 28 seconds remaining in the opening half, the Dunwoody, Ga., made her fourth save of the match, making an unbelievable diving effort to deny Mackenzie Smith’s attempt.

“Every time you make a big save, not only is it a confidence booster for yourself, but for the team as whole,” Speaks said. “Tonight’s win was huge, and it is something the team has needed for a long time. We have been working so hard for it, so it feels really good to get this win under our belts.”

Out of the break, the Hurricanes were looking to get on the board when Fortich sent a ball into the box from midfield toward the waiting head of Bayleigh Chaviers. The senior forward/defender flicked it backwards toward the net, but Clemson goalkeeper Sandy MacIver was able to make the stop.

Earning a corner in the 76th minute, the Tigers capitalized and took a 1-0 lead when Smith sneaked the ball into the back of the net.

However, not backing down, the Hurricanes quickly responded in the 78th minute, as freshman midfielder Ine Ostmo sent a corner into the box that was punched away by MacIver. Following an attempted clear by the Clemson defense, freshman defender Mari Horpestad found the ball at her foot and pocketed it in for the equalizer.

“At first I didn’t believe I scored, but it was awesome,” Horpestad said. “It was a weird feeling [scoring], but I liked it. I think I can get used to it (laughs).”

With overtime looming, Clemson earned a free-kick from 23-yards out with under four minutes remaining in regulation.

Skipping over the wall, Dani Antieau sent a perfectly placed ball into the bottom right corner of the net to give Clemson the 2-1 advantage.

But again, the Hurricanes quickly regrouped and found themselves back on the attack.

Then, with 1:19 remaining in regulation, the match was placed on the shoulders of Ostmo who was set to take her third career penalty kick.

In similar fashion to the prior two that resulted in goals for Miami, the Mandal, Norway, native once again remained calm, cool and collected to send the match into overtime.

“I was a little bit stressed out, just because there was only a minute remaining and there were so many players in the box [following the foul],” Ostmo said. “But it was fine. Yeah, it was a tougher situation then last time, but to be honest I am just glad I scored.”

Following a scoreless 10 minutes of overtime, the intensity quickly increased for the final 10.

In the 105th minute, Chaviers looked to secure the victory when she got off a shot that just missed wide of the net.

Four minutes later, the senior once again got a great look at the goal but this time MacIver was able to make the stop.

Then with 41 seconds remaining in regulation, Fortich buried home the corner off the foot of Giamportone, as the duo was quickly engulfed by their teammates.

“I mean, it definitely meant a lot, we needed that win,” Fortich said. “I think we all felt a goal coming, it was such a back-and-forth match and it was a matter of time. But just getting that goal and putting a dagger in the match felt really nice.”

“We train for that stuff all the time and part of it is just trusting your mechanics in those moments and understanding that you have done it before and you can do it again,” Barnes said on the match-tying penalty kick and match-winning corner. “Both were off set pieces, so you have the opportunity to focus and get your mind right. I mean, Ine has taken that same shot twice a week, every week. She was prepared for it and has always been composed in those moments. And I think Sel has been so close a number of times on corner kicks this season. And really, I thought Miche delivered a great ball and then for [Fortich] to finish it off was just an awesome ending. And again, something she trains all the time for and it is nice to see training pay off.”

Up next, the Hurricanes will welcome No. 12 Louisville to Cobb Stadium Sunday at noon. The match will be streamed live on ACC Network Extra.

“They are a very good team and it was a very competitive game when these two teams [Clemson and Louisville] played last,” Barnes said. “We played them last year, but we definitely were not at our best and they punished us severely. That has to be on our minds to make sure we show up, keep our focus and play with the same type of energy we showed tonight and at the same time, understand how to execute a new game plan against a team that has been really, really effective all season long. But we have to have it, so we have to attack it with the same mindset we attacked with tonight.”