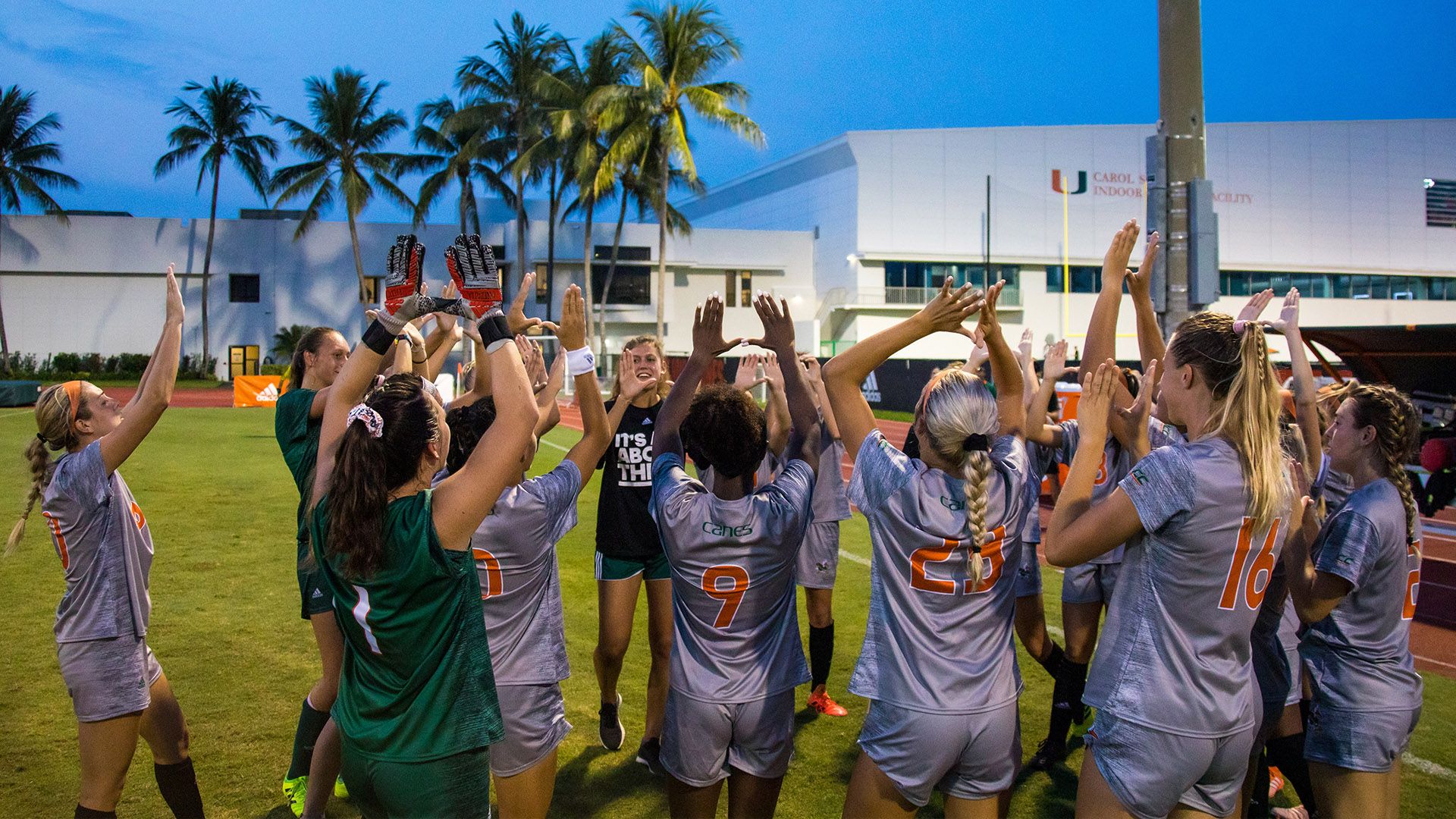 EDINBURG, Texas – Not one. Not two or three. But four goals propelled the University of Miami women’s soccer team past Fairleigh Dickson Sunday afternoon at the UTRGV Soccer and Track & Field Complex.

Overall, the Hurricanes followed up Thursday night’s 4-0 victory over UTRGV with a 4-1 win against the Knights to cap the UTRGV Tournament with a perfect 2-0 mark.

“We are obviously happy with the result, but I definitely felt like we played below our standards today,” head soccer coach Sarah Barnes said. “So, we go home fortunate to have two wins, but we are going to look to fix the issues and try to fine tune them so we can be better next week.”

In similar fashion to Thursday night, Miami’s first shot of the match, just 4:47 into regulation, resulted in a goal.

Receiving the ball from freshman midfielder Ine Østmo, junior Tia Dupont sailed a shot towards the net that ricocheted down off the cross bar and barely crossed over the line before FDU goalkeeper Amanda Fitzgerald could jump on it.

On the defensive side of the ball, in the 14th minute, freshman defender Mari Horpestad got her head on a cross to clear away FDU’s first goal-scoring opportunity. Moments later, sophomore goalkeeper Tyler Speaks collected her first save of the match denying Madelyn Robbins attempt.

19 minutes later, with the Hurricanes looking to hold on to their 1-0 advantage, Speaks went head-to-head with Jackson Bennett. Standing tall in the box, the Dunwoody, Ga., native made a tremendous stop to keep her clean sheet alive.

In the 40th minute, just five minutes after checking into the match, freshman forward Emma Tucker blew past the Knights’ defensive line and made a move past Fitzgerald before getting tackled to the ground.

For the second time in as many matches, Østmo walked up to the penalty kick line with ice in her veins burying not one but two goals, since the first was called off by the official due to illegal movement outside the 18-yard box.

With only a minute passing, Tucker once again made a fantastic run up the middle and this time was gifted a one-on-one opportunity off a through ball from Dupont. With time to make a decision, the Marshfield, Mass., native blasted the ball into the back of the net to lead Miami into the locker room with a 3-0 advantage.

Playing the opening half for Miami in both matches, before subbing out for freshman goalkeeper Melissa Dagenais, Speaks capped the weekend with seven saves and zero goals allowed in 90 minutes of action.

Out of the break, junior midfielder Alexa Ferreira looked to extend Miami’s lead, however with a shot heading towards the bottom corner of the net, Fitzgerald was able to make an incredible diving save for the Knights.

In the 55th minute, Fairleigh Dickinson got on the scoreboard when Lea Egner capitalized on a rebound in front of the goal.

The goal was the first allowed by the Hurricanes in 308 days, when UNC recorded a tally in the 56th minute on Oct. 21, 2018. Overall, the Canes went 267:04 consecutive minutes without allowing a goal.

With eight minutes remaining in the contest, senior forward Kristina Fisher led her fellow classmate, midfielder Lauren Markwith, into space, as the Huntington Beach, Calif., native notched her second goal of the weekend to place Miami in front 4-1.

The Hurricanes will return to action on Thursday night at 7 p.m. at Cobb Stadium, in the home opener against Florida Atlantic. The match will be streamed live on the ACC Network Extra.