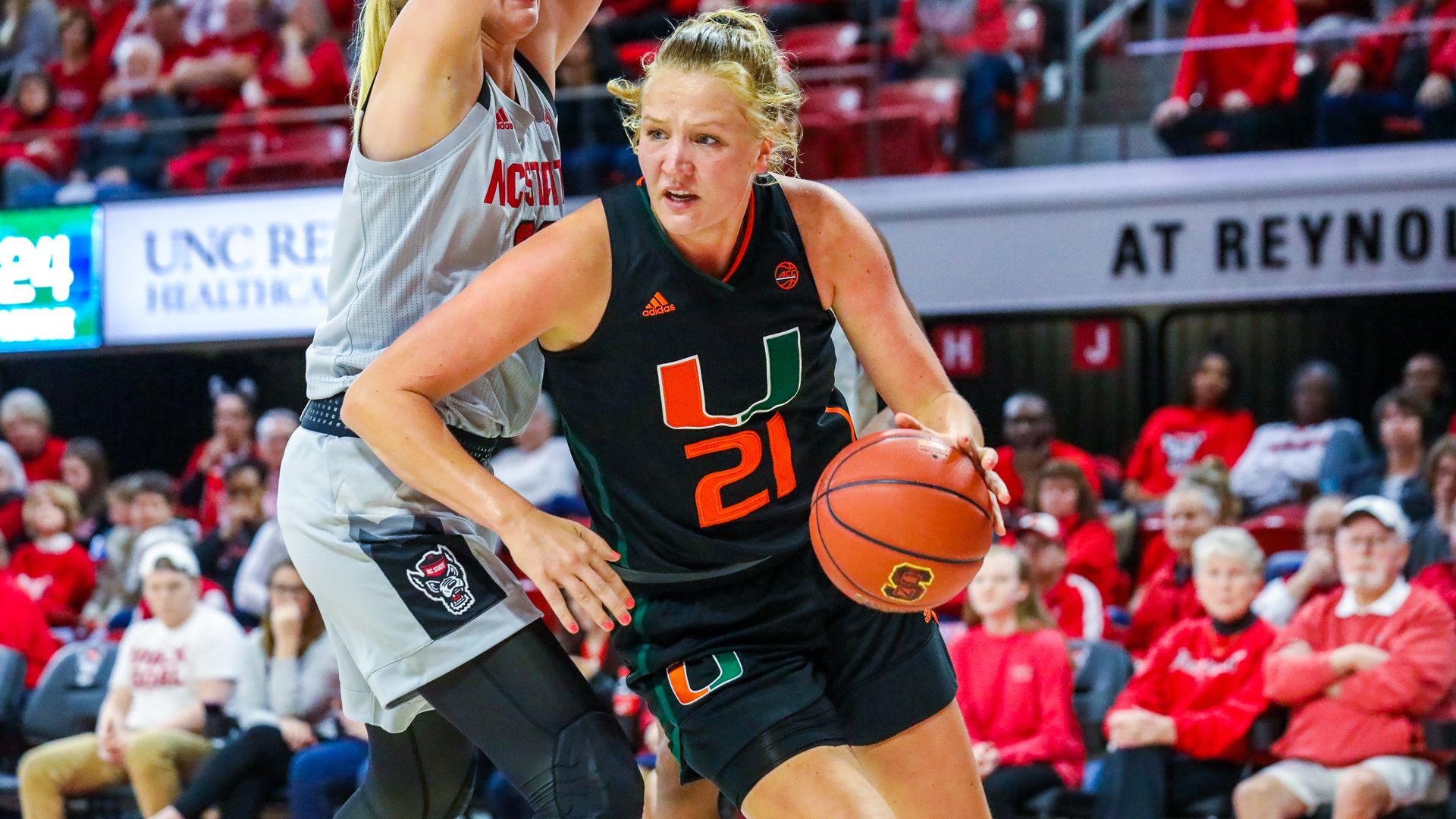 RALEIGH, N.C. – The University of Miami women’s basketball team came up just short of its third top-10 win of the year Sunday afternoon in front of a sold-out crowd of 5,500 at Reynolds Coliseum.

The Hurricanes jumped out to a quick 11-2 lead and held NC State (25-4, 12-4 ACC) to just four points in the first seven minutes of action. The Wolfpack, however, closed the frame on a 13-2 run, including scoring nine straight points, and held a 17-15 lead through 10 minutes.

Miami turned in a dominant second period on the offensive end, tallying 23 points and outscoring NC State by 10 to go into the locker room with a 38-30 advantage.

Hof led all scorers at the break with 12 points on 6-of-8 shooting. Her fellow frontcourt starter, redshirt junior forward Beatrice Mompremier, nearly tallied a double-double in the opening half, notching 10 points and nine rebounds.

Hof scored the first basket of the second half to give Miami a game-high 10-point lead, but the Wolfpack countered with 10 points in a row to pull even at 40 with 6:55 left in the third frame. After the Hurricanes answered with five quick points, NC State outscored Miami by seven the rest of the session and took a 53-51 advantage into the final period.

“Our third quarter, the layups and the bunnies [we missed] at the rim in the third quarter gave NC State life and they took advantage of it,” Meier said. “If we hit those layups in the third quarter—and I think there were five of them—then we have a nice little cushion going into the fourth. But we didn’t and we control that.”

The Hurricanes held a narrow 56-55 edge with seven-and-a-half minutes to play, but the Wolfpack scored six points in a row to take a lead it would not relinquish. Miami closed the game on and 8-3 run in the final 15 seconds, but it proved to be too little, too late.

To go along with logging her team-leading 10th 20-point outing of the season, Hof added eight boards to move into the top 10 all-time at Miami with 724 in her career. The Utrecht, Netherlands, native added three assists, two blocks and two steals, while setting a new career best with her 12 made field goals.

Mompremier finished with 15 points and a game-high 17 rebounds, tied for the second-most of her career. It was her sixth 15-rebound performance of the season, including her third in the last four games and second in a row. In addition, the double-double was her ACC-high 23rd of the year.

The Hurricanes, who tied for third in the ACC, earned the fourth seed in the ACC Tournament and will begin play Friday at 11 a.m., live on RSN. They will play either fifth-seeded Syracuse, No. 12-seed Virginia or No. 13-seed Boston College at the Greensboro Coliseum in Greensboro, N.C.

“I want us to be really confident, I want us to know that we have a lot [we have proven],” Miami head coach Katie Meier said of the team entering the postseason. “I think we can win on the road; I think we play really well on the road. We should be very confident going into the ACC Tournament.

The fourth seed is the third-best in program history, shy only of the second seed Miami had in both 2011 and 2012.

MIAMI HURRICANES POSTGAME NOTES
– The Hurricanes moved to 11-11 in their all-time series with NC State, including 10-2 in the last 12 matchups.
– Miami wrapped up the regular season with a 6-2 record against ranked opponents, including a 5-2 ledger in ACC play, a 3-1 mark versus top-15 teams and a 2-2 tally on a the road
– Mompremier (23) and Hof (nine) have combined for 32 double-doubles across 27 of the team’s 31 games this season, while Cornelius has one of her own to give Miami 33 in total.
– Five different Hurricanes have combined for a total of 26 20-point performances across 24 of the team’s 31 outings.
– Along with Hof moving into the top 10 on Miami’s all-time rebounding list, Mompremier played in the 100th game of her career and reached 800 rebounds, Cornelius eclipsed 300 assists as a Hurricane, sophomore guard Endia Banks reached both 250 rebounds and 1,000 minutes played at Miami, sophomore guard Kelsey Marshall surpassed 500 points as a collegian and redshirt senior Khaila Prather reached 300 rebounds in her career.