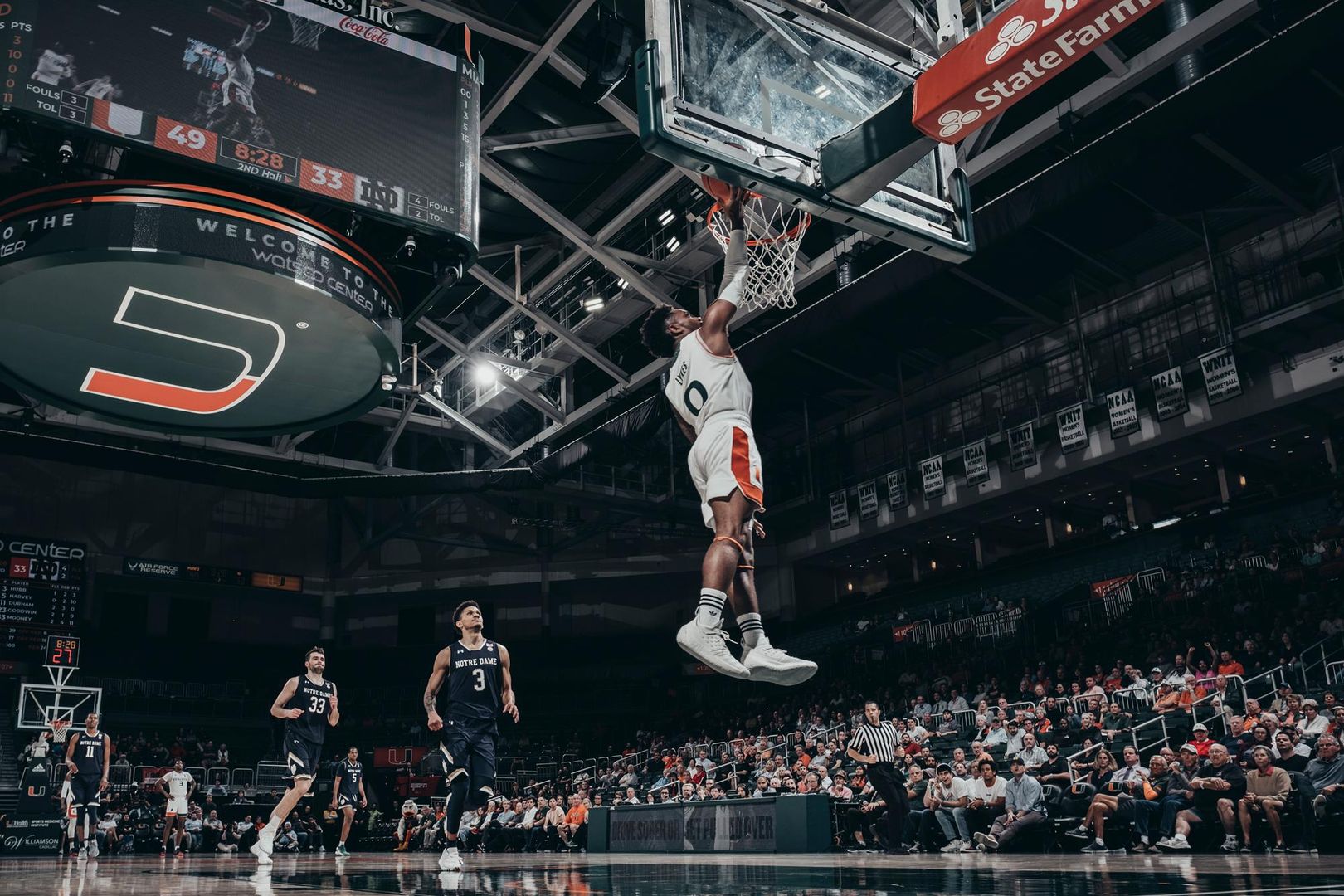 CORAL GABLES, Fla. – In its best defensive showing since Nov. 22, 2017, the University of Miami men’s basketball team blew past Notre Dame, 62-47, Wednesday night at the Watsco Center. The 47 points marked the fewest points for an opponent since Miami (10-12, 2-8 ACC) held La Salle to 46 points last season.

Finishing the night with a game-high 15 points, Dejan Vasiljevic pulled down a career-high 10 rebounds to secure his first career double-double. The junior guard’s double-double was matched by senior teammate Anthony Lawrence II, who posted 11 points and a game-high 12 rebounds. Overall, the duo recorded the program’s first pair of double-doubles on the same night since Davon Reed (10 points, 12 rebounds) and Kamari Murphy (11 points, 13 rebounds) accomplished the feat against Buffalo in the opening round of the NCAA Tournament on March 17, 2016.

The tandem were joined by Ebuka Izundu (14 points) and sophomore guard Chris Lykes (11 points) in double figures, while the senior center grabbed seven rebounds and finished the contest shooting a perfect 7-of-7 from the field.

Miami used a 24-10 outburst to enter the locker room in command 28-23, its first halftime lead since holding a 41-40 advantage over Louisville on Jan. 6. Through the opening 20 minutes of action, Izundu took over in the paint, shooting a perfect 5-of-5 from the field to lead the Canes with 10 points while pulling down five rebounds. At the half, the Hurricanes held the Fighting Irish to shoot just 8-of-25 (32.0 percent) from inside the arc, including just 3-of-19 (15.8 percent) from the field and 0-of-11 from beyond the arc in the final 16:20 of action.

Out of the break, Miami opened with a 6-0 run, following a trio of jumpers by Vasiljevic, Lawrence and Lykes, as the Canes extended their run to 30-10 over a span of 18:13. Miami pushed its lead to as many as 18 points midway through the second half.

The Hurricanes will return to action on Saturday, when the team heads to Chapel Hill to battle No. 8 North Carolina at the Dean E. Smith Center at noon. The game will be broadcast live by Raycom affiliates.
Game Notes

• Miami won its second straight game against Notre Dame and now leads the series, 12-11.
• Miami led at the half for the first time since the Louisville game on Jan. 6. The Canes trailed or were tied at the half in each of the last seven games.
• Notre Dame’s 23-point first half matched the fewest points allowed in any half by Miami this season (23 in first half vs. Florida Atlantic on Dec. 22).
• Miami’s 16-point lead in the second half was its largest in ACC play this season (15 in first half at Louisville on Jan. 6).
• Notre Dame’s 47 points were the fewest by a Miami opponent in ACC action since Jan. 14, 2017, when Miami topped Pittsburgh 72-46
• Miami tied a season low with four made 3-pointers (also four at Florida State on Jan. 9 and Virginia on Feb. 2).
• Anthony Lawrence II recorded his fourth career double-double and second this season with 11 points and 12 rebounds.
• DJ Vasiljevic picked up his first career double-double with 15 points and a career-high 10 rebounds.
• Chris Lykes scored 11 points, reaching double figures for the 19th time in 22 games this season.
• Miami had two players with double-doubles in the same game for the first time since Kamari Murphy and Davon Reed on March 17, 2016, against Buffalo in the NCAA Tournament.
• Zach Johnson scored nine points and has scored 1,633 career points (1,344 at Florida Gulf Coast, 289 at Miami).

“Well there was great concern on our side when we fell behind so quickly. They had 13 points at the first media timeout, but we played much better. I think we only gave up 10 in the last 16 minutes of the first half and we continues to play good defense. At least I hope it was good defense. I know they missed some wide open shots, but I think overall we defended and we rebounded. This is the first game out rebounded someone in a very long time, 39-33. I said before the game we needed five guys in double figures, and we had four in double figures and another with nine. So, that’s kind of what I was hoping for, that kind of performance.”

On DJ Vasiljevic’s first double-double of his career…

“I think he would tell you that at Virginia he wasn’t himself and I had a long talk with him on Monday and I could tell yesterday he was in a much better place mentally and emotionally, probably more emotionally. He was very ready to play tonight and you can tell that when a guy chases down rebounds. Most guys think the big guys have to do the rebounding, but you look tonight and Ebuka had seven, DJ had 10 and Amp had 12. That was truly a great team effort on the defensive end and Sam Waardenburg chipped in with five and Chris Lykes with three. That’s what teamwork is. More guys contributing in many different facets of the game.”

On Ebuka Izundu’s first half dominance…

“He played 18 minutes in the first half and only 10 in the second because of cramps, again.”

On Ebuka’s dunk leading into the second half…

“Well it was very interesting, because this is what I told the team at the half, when we played Notre Dame at Notre Dame last year, Lonnie Walker made a three at the buzzer and we got a defensive stop and kicked it ahead and for about half a second left, Lonnie Walker launched a three from the right corner, buried it and I thought it gave us tremendous momentum. Notre Dame then came out and scored nine straight points in the second half, so I told the guys we did this last year and we can’t relax and let them come out of the box in the second and take away all the momentum and we didn’t. We played very well to start and I think we scored the first six points of the second half, that put our lead at double digits and we were able to sustain that, maintain that in second half.”

Opening statement…
“We couldn’t keep it in front of us either. If you score 47 points, you’re not going to win a league game. I would give Miami’s defense credit, you know, not us missing shots. We did miss some clean ones in the second half that maybe could have helped us rally and Lykes just changes the game with his ball pressure. He just disrupts and I thought Miami played really well. I think they’re a good team. They play an unbelievably tough league schedule, league slate.  I think their personnel is pretty good even though they only have seven of them.”

On what happened on the early 13-4 run to start the game…
“I thought we were gonna have a really good offensive night like we did in Boston on Saturday. I think we made three 3s in that run right? We had 13 points and we couldn’t get back into a rhythm. Again, I would give Miami’s defense and ball pressure credit because we had some turnovers there and they rushed us because they were athletically up on us.  Maybe they weren’t guarding us as hard early and then they woke up. You know I’d have to look at the tape, but when they get out and athletically guard you and Lykes’ pressure on the ball, they’re tough to deal with.”

On Vasiljevic’s big night…
“What did he have? I don’t even know. He’s a threat, you know. We tried to play some zone against and that helped us a little bit early. I thought he did a great job driving. You know he’s underrated as a driver. We know he can shoot the ball. But they’ve got men, they’re old. I thought some of the matchups with our young guys, they kind of man handled us at times and that has really been the story of us in this league. We have been picked on a little bit and treated like a JV and they did it at times because so many young guys were playing.”

On Chris Lykes…
“Defensively, I think that’s one of the reasons we turned it over so much and Prentiss had six turnovers. He’s just really disruptive. He pressures the ball and he is quick enough where he can leave his man and run around and make plays. He kind of disrupted our whole flow after the first four minutes. It’s almost like he was warming up early in the game and we got some looks and then he was like, okay now I’m ready. The other 35 minutes we were searching.”

On recording his first career double-double, and how he turned things around after facing Virginia…

“So I had a meeting with [head] coach [Jim Larrañaga] on Monday, and he told me that my effort and body language wasn’t to the point where I can be. A fighter and being tough, and I took that to heart because I’m not known to be like that. So, you know, I just cleared my mind over the couple days and then came out today and showed the effort and the execution and whatever he asked me to do, I did it to the best of my ability.”

On what he thought the difference tonight was compared to Sunday…

“Our defense, the one and done. So, you know, stopping them, getting the rebound and finishing off the possession. And we [didn’t do] that for the first four minutes, they scored the first 13 points. And then after that we locked down defense and we gave them 10 points in 16 minutes in the first half, and then we continued it out of the half which was a great job by the guys.”

“Coach L talked about how the ACC is played in like two parts, first nine games and the next nine. And we didn’t play… I mean, we played to the best of our ability, just some results didn’t go our way in the first nine games and he told us to forget about it and you know focus on the next nine and you know it’s a good start, 1-0, and we just got to continue against UNC on Saturday.”

On what he was thinking when Ebuka Izundu went out with cramps, what was the team’s mood at that point…

“We were feeling good, because we were up at that time. So, we were just going to continue to work hard, keep playing smart [and] making the right plays until Buka had a chance to come back into the game.”

“It is a very good feeling to get a win at home. We have been going through a little losing streak, so it’s always good to come home and get a win.”