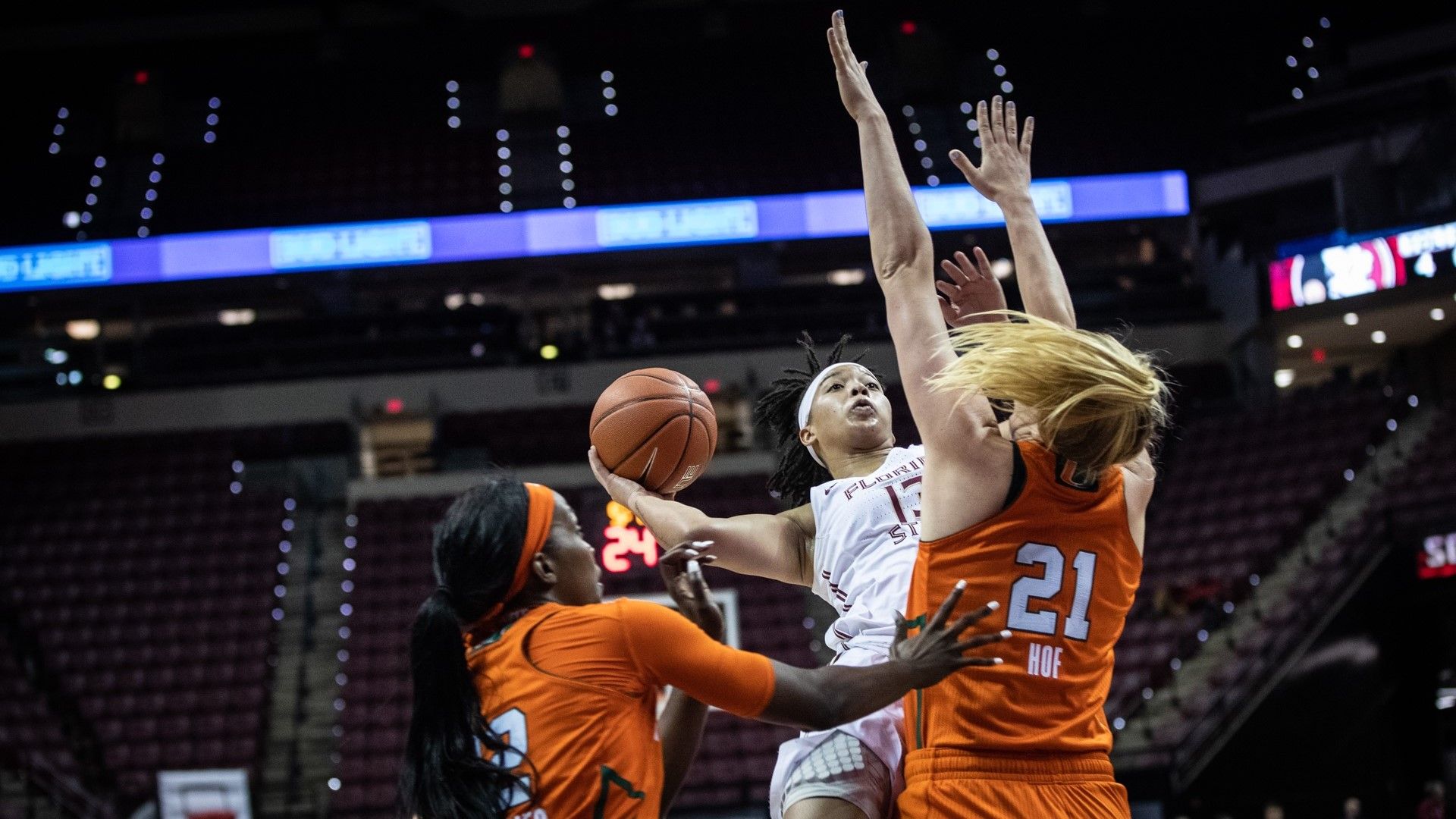 Despite 13 points and a game-high 14 rebounds by redshirt junior forward Beatrice Mompremier, RV/No. 23 Miami (18-5, 6-2 ACC) was unable to overcome turnover woes and saw its four-game winning streak come to an end.

“I think we played a little bit spoiled and soft. I have got to credit Florida State; I thought their personnel scout was great,” Miami head coach Katie Meier said. “I had to coach my individual players and say, ‘They are taking this away from you. This is what they are doing to you.’ I had to do that out loud, throughout the game, to get their attention.”

Miami opened the second frame with a 3-pointer to stretch its lead to nine, but scored just three points the rest of the way in a low-scoring quarter. The two sides combined for five total points in the first six minutes of the period, but a strong finish by the Seminoles trimmed their deficit to two, 22-20, at the break.

The Hurricanes held Florida State to 9-of-33 shooting (27.3 percent) in the first half, including a 0-of-9 mark from beyond the arc. It marked the first time this season a Miami opponent has gone a half without making a 3-pointer.

Miami went on an 8-0 run in a span of just 1:36 to cut its deficit to two, 44-42, with 6:52 remaining. However, Florida State answered with an 8-0 run of its own that featured two 3-pointers by redshirt junior forward Kiah Gillespie and made it 52-42 with just 3:18 to play. Miami pulled back within five multiple times, but could not get any closer until a 3-pointer at the buzzer.

“That is the worst my team has listened all year. It took until the fourth quarter to really listen and execute and you saw the result of that,” Meier said. “So, that is good news, bad news. When we locked in, really listened, executed and had some poise, we were fine. But Florida State’s personnel scouts caused us to lose our composure. Credit to their staff, assistant coaches and their players.”

Sophomore guard Mykea Gray led Miami with 14 points and connected on four 3-pointers in a career-high-tying 37 minutes of action. For Mompremier, the double-double was her ACC-leading 17th of the season, including her 12th in her last 13 appearances and eighth in a row.

Senior forward/center Emese Hof nearly logged a double-double of her own, finishing with eight points, all in the fourth quarter, and nine rebounds.

Gillespie paced all scorers with 20 points, including 18 in the second half, while redshirt freshman guard Sayawni Lassiter added 11 for the Seminoles and went 8-of-8 at the line.

Both teams shot under 40 percent in the defensive affair, with the Hurricanes posting a 22-of-60 mark (36.7 percent) and the Seminoles tallying a 23-of-64 ledger (35.9 percent). Florida State forced 23 turnovers, tied for Miami’s second-most this season, and turned them into 19 points, while the Hurricanes got seven points off the Seminoles’ 14 turnovers.

Miami now returns home to Coral Gables, Fla., where it hosts Virginia Sunday at 1 p.m. at the Watsco Center.

MIAMI HURRICANES POSTGAME NOTES
– The Hurricanes fell to 14-45 in their all-time series against Florida State, which dates back to the 1974-75 season.
– Thursday marked the first time a Miami opponent did not make a 3-pointer in the first half since Colorado did so on Nov. 18, 2017 and the first time an ACC opponent went without a 3-pointer in the opening half since Duke did so on Feb. 6, 2016.
– Miami’s 22 points before the intermission were its lowest in a half this season, while its 20 points conceded tied its third-fewest against in a half in 2018-19.
– Mompremier (17) and Hof (six) have combined for 23 double-doubles across 20 of the Hurricanes’ 23 outings, the most of any ACC duo, while redshirt junior guard Laura Cornelius has one of her own to give Miami 24 as a team.
– Mompremier eclipsed 700 rebounds as a collegian, Hof moved past 650 rebounds at Miami and sophomore guard Kelsey Marshall surpassed 150 made field goals as a Hurricane.