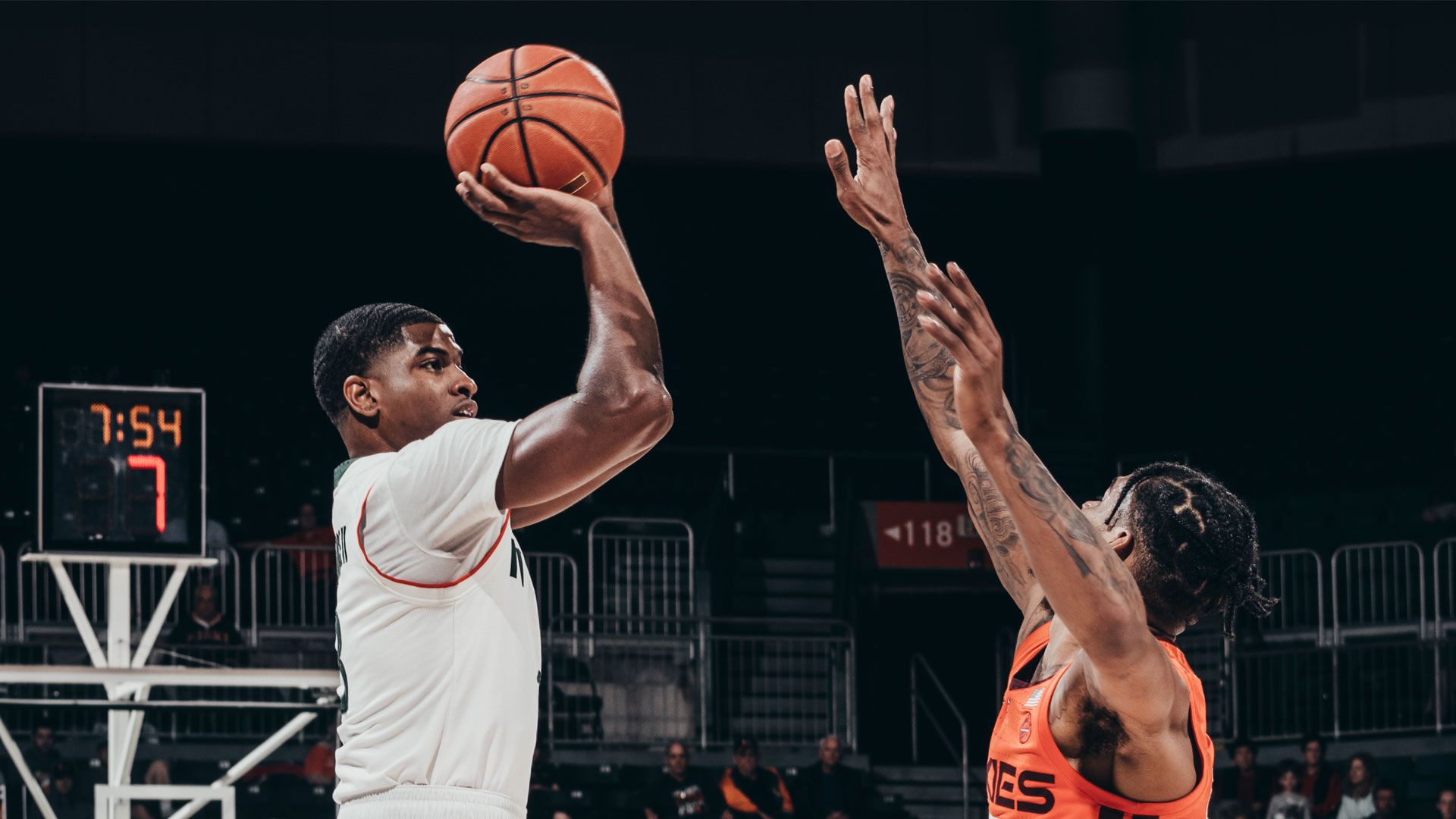 CORAL GABLES, Fla. – Battling No. 12 Virginia Tech all the way to the end, the University of Miami men’s basketball team came up short, 82-70, Wednesday night at the Watsco Center.

The Hurricanes (9-11, 1-7 ACC) were led offensively by sophomore guard Chris Lykes (19 points, four assists) and senior guard Anthony Lawrence II (15 points), while Lawrence finished just shy of a double-double, leading the way on the defensive side of the ball with nine rebounds. The duo were joined by redshirt senior guard Zach Johnson (10 points) in double figures.

The Hokies were led by Nickeil Alexander-Walker on both sides of the court, as the sophomore guard finished with a game-high 25 points, six steals, five assists, while also pulling down four defensive rebounds. He was joined in double figures by Ahmed Hill (19 points), Justin Robinson (17 points) and Ty Outlaw (11 points).

In a back and forth opening half, Virginia Tech and Miami continued to exchange baskets, with Lawrence knocking down a triple to place the Canes in front 18-15 with 8:35 to play in the period. The Hokies then countered with a 10-0 run over the next 3:17 of play, before taking a 34-27 advantage into the locker room, a lead they would not look back on.

Next up, the Hurricanes will travel to Charlottesville, Va., when they battle the third-ranked Virginia Cavaliers at 2 p.m. The game will be broadcast live by Raycom affiliates.

Game Notes
• DJ Vasiljevic hit a pair of 3-pointers and has connected on at least one shot from long range in 33 straight games, the longest current streak among ACC players.
• Vasiljevic’s streak is third longest in program history and two games shy of matching the school record.
• His streak is tied for the 20th longest in ACC history with Duke’s Jon Scheyer (2010) and Trajan Langdon (1998-99) and Wake Forest’s Randolph Childress (1994-95).
• Vasiljevic is 10th in program history in career 3-pointers made with 172.
• Zach Johnson scored 10 points and has scored 1,614 career points (1,344 at Florida Gulf Coast, 270 at Miami).
• Sam Waardenburg played 30 minutes, his most in his career in an ACC game.
• Virginia Tech shot 68 percent (17-25) in the second half – the best half of shooting by a Miami opponent this season.

Postgame Quotes
Miami Head Coach Jim Larrañaga
Opening statement…
“You might be surprised about what I’m going to say, but there was a time in the second half where I thought we played our best basketball for about a six or seven minute period. Things we want to do every day, every game, play hard at the defensive end of the floor, get stops, share the ball on offense, find the open man, penetrate and pitch, get touches, get everyone involved and quite frankly, we haven’t been doing that. It’s very frustrating. It’s frustrating for the players, it’s frustrating for the coaching staff. You fall behind because you’re not playing good, quality basketball. All of a sudden we did. I liked what we did for that six or seven minute period. I told the guys that at the timeout. I told them this is what we need to do all the time. I told them that after the game, too. Hopefully, it’s a lesson that will prove to be helpful for us for the remainder of the season.”

On why the team hasn’t been able to get to the right point until today…
“I would say there are a lot of reasons. We have some new guys who have never played here before, playing a major role. We have some young guys who are used to playing with different players. One of the things they talk about, chemistry. I thought we had terrific chemistry over the last four or five years. If you go back to Shane Larkin, Durand Scott, Trey McKinney-Jones, Kenny Kadji, Julian Gamble, they had great understanding of what everyone can do. They played off each other very well. When we had Angel Rodriguez, Sheldon McClellan, Davon Reed, Kamari Murphy, Tonye Jekiri were very, very familiar with each other. They were very experienced players and they each knew their role. This year we have some new guys, different starters and are used to coming off the bench and are playing sparingly and now they play a lot of minutes and are playing 100 percent physically. We’ve had some very strange circumstances to deal with. You start out with four centers and end up with one. You start out with a number of guys who can play the four and end up with one. You have guards, but two of them, this is their first year here. Chemistry is about knowing how to play with the other guys and know what you should be thinking while you’re on the court. I talked to the players about what discipline is and our definition of discipline is; do what you’re supposed to do, when you’re supposed to do it and do it to the best of your ability every time. First off, you have to know what you’re supposed to do. We drew up a play and didn’t run it correctly at all. So, if guys can’t figure things out, they have to basically figure it out on their own when they game’s going. I was pretty pleased with the shot selections we got late in the game were pretty good. Not perfect, still times where we should’ve shared the ball better, but at least it looked like we were trying to do what I wanted.”

On Chris Lykes…
“Chris had 19 points. He played very hard and scored the ball, but he’s going to be really effective when his teammates are playing well, when they’re making shots and stretching the defense, dribble penetration and get to the foul lane themselves. The ball’s got to move from his hands to someone else’s hand and back to his hand. I thought there was a time period in the second half where we did it. We just didn’t do it at all in the first and we didn’t do it at all in the first 10 minutes in the second half.”

Sophomore Guard Chris Lykes
On playing good basketball in the second half…
“With 6:06 left in the second half, Coach L got fired up and he’s been telling us all season and for some reason we started to do it and we were getting easy looks and open shots. I don’t know about the other guys, but I felt like that was some of the best basketball we’ve been playing throughout this year. If we can find a way to do that for 40 minutes, then I think we’d play a lot better.”

On why it clicked tonight…
“Sometimes out of losses, good things happen. I’m not sure and I know he’s not sure either, but I think at the end of the day, all that matters is that we figured it out.”

On what got his game going again…
“Just tried to do some of the things I always try to do. Sometimes when you have bad games, you just try and bounce back from it and continue to have confidence in yourself.”

Redshirt Senior Guard Zach Johnson
On playing the best basketball in second half…
“I think we were locked in defensively. We had each other’s back defensively so that carried over offensively. We just had to listen to what Coach L had to say and execute.”

On going to Virginia next…
“Trust. Trusting our teammates that everyone is capable of doing something offensively and understanding that we have each other’s backs.”

Virginia Tech Head Coach Buzz Williams
On how team played in second half without Justin Robinson…
“I think any time you can shoot over 50 percent from the field in a half, that is good. If you can shoot free throws in double digits, I think that’s good. Our turnover rate was too high for the game. I think we may have had seven in the first half and eight in the second half. So, collectively, we turned the ball over at too high of a rate.”

On Coach L calling Alexander-Walker an NBA guy and his performance this game…
“I think he’s a really good player. Coach has been doing this way longer than I have and has been way more successful. But I know his son is very successful in the NBA and so their opinion is probably correct. I have never worked in the NBA. We’re grateful that he is here and he’s an unbelievable kid. He is very important to our team. I thought at times he played incredibly well tonight.”

On first road win in three weeks…
“I think it is just such a thin margin in the league, home or on the road to win. We are 2-2 on the road in ACC play. There will be teams currently that are better than that. I don’t know that a 500 record is great but considering what our past two performances have been on the road we are thankful.”

On his defense…
“I thought we did better. I don’t know what percentage of their shots were from three, but it was a high percentage. I think we are doing a better job collectively of not giving up second [chance] opportunities. We want to force turnovers, relative to how we play, and we understand that  times that gives up threes. But, yeah, I thought at times we were pretty good.”

On an undermanned Miami ballclub…
“I think they’re good. I think Chris Lykes is very hard to guard. Five [Zach Johnson] is a completely different type of player than zero [Chris Lykes], but really comfortable with the ball in his hands going downhill. I think their spacing is incredibly good. I think 15 [Ebuka Izundu] was averaging 8.9 rebounds, I can’t remember whether that is up to date and where that put him within the league. But from an offensive rebound rate he is one of the better ones in the country. One [Dejan Vasiljevic] has always caused us problems. Three [Anthony Lawrence II] has whipped us every single time we have played him, home or on the road since we have been here. I like their team.”