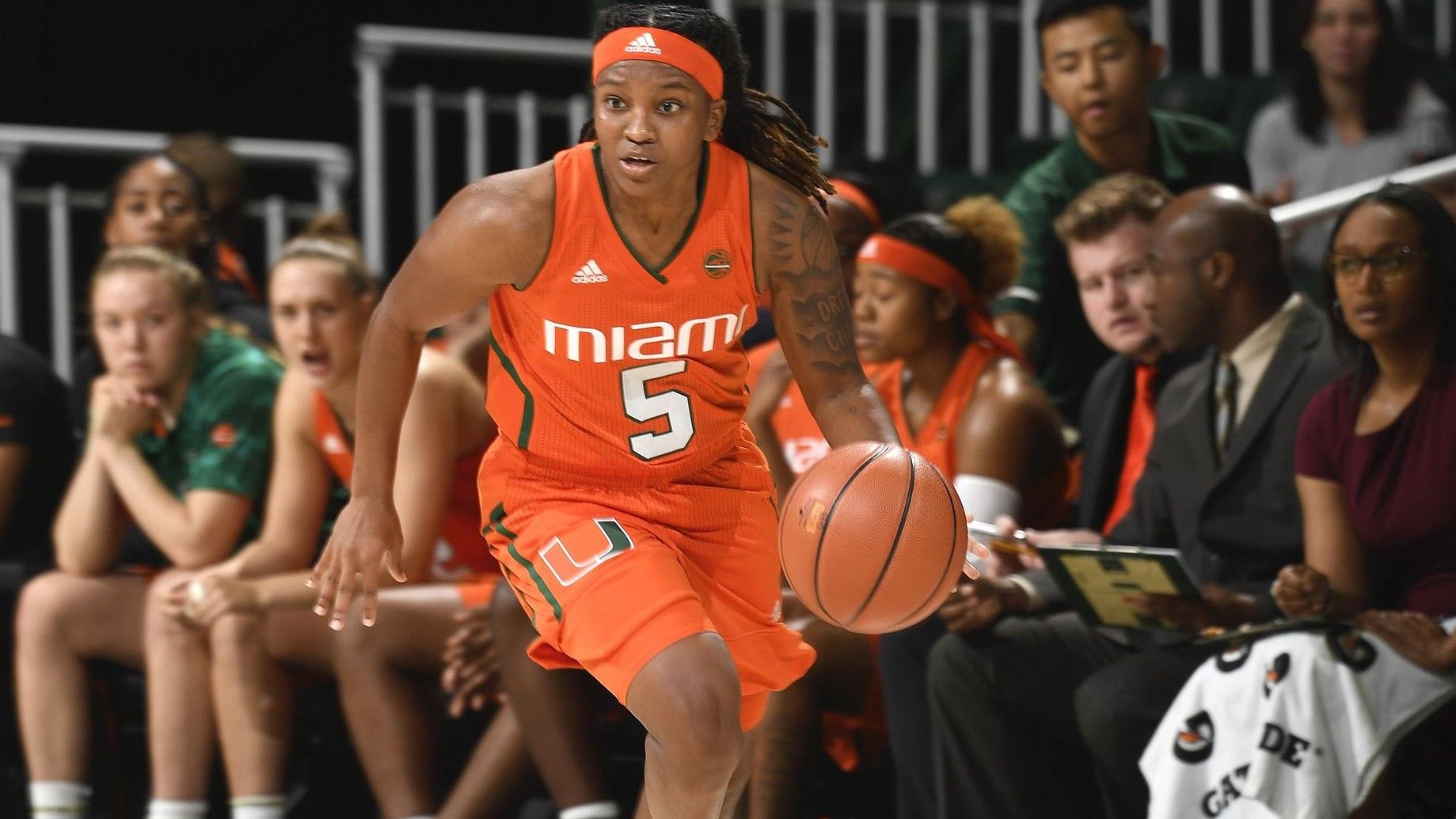 “Well, we had to change and make an adjustment at halftime. The staff talked through a lot of different scenarios,” Miami head coach Katie Meier said of the defensive performance. “One lineup could play one defense [and our reserves could] play another, but the bench won the game for us. They really did because the defense that they could play really well, it worked.”

Defense continued to control the game at each end in a second session that featured of a span of 3:40 with no field goals made by either team. Both sides totaled 14 points in the period and the Demon Deacons took a 31-27 lead into the locker room.

Miami and Wake Forest combined to shoot 21-of-65 (32.3 percent) in the first half and totaled 28 turnovers. Both of the Hurricanes’ frontcourt starters, Mompremier and senior forward/center Emese Hof, picked up two fouls within the first 15 minutes.

Sophomore guard Mykea Gray jump-started the Miami offense after the break, scoring eight points in the first five minutes of the third period. Her three-point play opened a 9-0 run in a 74-second span that gave the Hurricanes a 43-37 advantage with 4:33 left in the frame. At the end of the quarter, Miami held a narrow one-point lead, 49-48.

The Hurricanes never fell behind after going in front and upped their lead as high 15 twice during a fourth session in which they outscored Wake Forest by 14 points, 23-9. Miami conceded just 26 total points after the intermission.

Gray finished as Miami’s leading scorer with 20 points, her third time reaching that figure this season and the most in her career in ACC play. She tallied 16 points in the second half, en route to tying career highs in both free throws made (eight) and attempted (11) while playing a career-high 37 minutes. The Upper Marlboro, Md., native added a game-high five assists and tied her career best with a co-game-high four steals.

Mompremier logged 19 points on 9-of-13 shooting and added a game-best 15 rebounds. It was her seventh double-double in the past eight outings, including her third in a row. Redshirt junior guard Laura Cornelius scored 11 points in a career-high-tying 36 minutes and sophomore guard Taylor Mason notched a career-high 10, including eclipsing her prior ACC high of seven with eight points in the first 12 minutes.

“I thought both Mykea and Laura had not-so-great first halves and they heard that at halftime. Both of them responded with really big-time veteran responses in the second half, staying faithful,” Meier said. “In our program, if you’re playing bad, we’re going to tell you the truth . . . and I pointed at every guard in the locker room and told them you need to change. Every single guard got a finger in their face and they responded really well, especially Taylor Mason.”

Miami now returns home where it will host its second elementary school day of the season, as it welcomes Clemson to the Watsco Center Thursday at 11 a.m.

MIAMI HURRICANES POSTGAME NOTES
– The Hurricanes moved to 12-9, including 4-1 in the past five meetings, in their all-time series with the Demon Deacons, which dates back to 1983.
– After opening ACC play Thursday with a victory for the sixth time in seven years, the Hurricanes improved to 2-0 in conference action for the first time since 2014-15.
– Mompremier (12) and Hof (five) have combined for 17 double-doubles across 14 of Miami’s 17 games thus far.
– Five different Miami players have totaled 16 20-point outings across 14 of the Hurricanes’ 17 games so far.
– Mompremier moved past 800 points as a collegian, Gray eclipsed both 550 points, 150 free-throw attempts and 1,250 minutes played at Miami, Cornelius moved past 2,000 minutes played in her career, Mason reached 50 assists as a Hurricane and redshirt senior forward Khaila Prather eclipsed both 1,000 minutes played and 100 free-throw attempts at Miami.